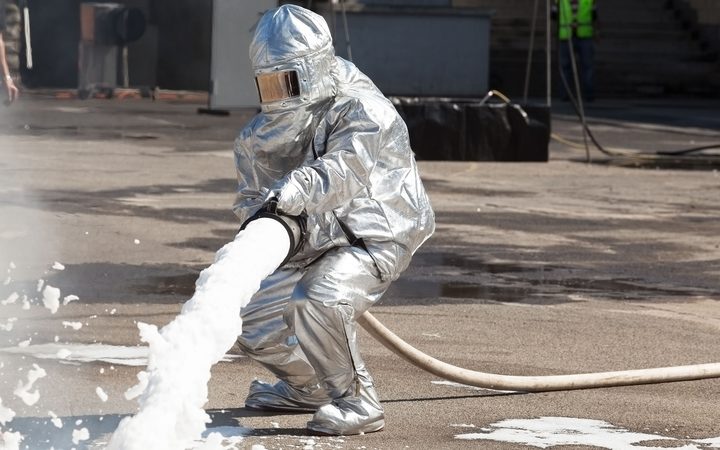 The town water supply at Sanson in Manawatu has tested completely clear of firefighting foam chemicals.

However, the nearby larger town of Bulls has traces of the toxic foam in the bores that supply homes with water.

The towns asked for testing because they’re close to the contaminated Air Force base at Ohakea.

These are the two chemicals, now banned, that are part of a larger chemical group called PFAS.

In Bulls, which is across the Rangitikei River from Ohakea, “PFAS levels [are] …. well below the national Drinking Water Guidelines and that the town’s water supply safe to drink,” the Environment Ministry said.

“Results indicated the presence of PFAS in four of the five bores and in the supply network, but at levels well below threshold level ….”

RNZ has asked for the actual test results to be released.

The Ministry of Health has advised that there should be no health concerns for Bulls residents given the very low levels found in the water supply, and therefore no reason for residents not to continue using the water.

PFAS chemicals can travel some distance in groundwater, so more tests were underway to determine the likely source in Bulls’ groundwater with results in about a month, Ross McNeil said.

More testing is now going on around Bulls including of a bore between the town and the site of an Airforce plane crash.

Defence says it stopped using the PFOS and PFOA foams in 2002, but once they are in the soil and water, they last for many, many years.

The latest health advice about PFAS exposure, from the Environmental Protection Agency in the US where the research is probably the most advanced is that “there is evidence that exposure to PFAS can lead to adverse health outcomes in humans”.

“Studies indicate that PFOA and PFOS can cause reproductive and developmental, liver and kidney, and immunological effects in laboratory animals. Both chemicals have caused tumours in animal studies.

“The most consistent findings from human epidemiology studies are increased cholesterol levels among exposed populations, with more limited findings related to: infant birth weights; effects on the immune system; cancer (for PFOA); and thyroid hormone disruption (for PFOS).”