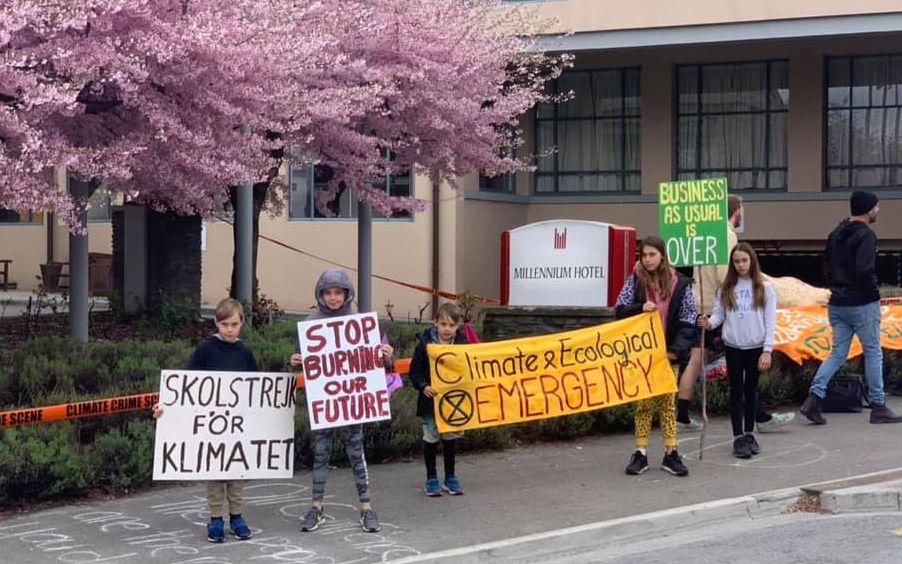 About 35 protesters gathered outside the 2019 Petroleum New Zealand Conference in Queenstown today, demanding a stop to fossil fuel expansion.

The protesters, from Extinction Rebellion, Oil Free Otago and Environmental Justice Otepoti, surrounded the Millennium Hotel on Frankton Road where it’s being held to peacefully “engage the public and create some disruption.”

They surrounded the hotel in orange tape, declaring it the scene of a “climate crime.”

It’s at least the forth year protesters have convened outside the conference, despite organisers keeping details of this years event under close wraps, to protect the safety of delegates.

One of the protesters, Jack Brazil, said the conference was a stark contrast to the Prime Minister’s speeches at the UN, where she described New Zealand’s commitment to solving the climate crisis.

“So we’re here to say business as usual is over… this industry has known for 50 years the harm that fossil fuels do to the planet and are here to get the most out of their dying investment,” he said.

Mr Brazil said protesting there was also a show of respect to the thousands of people who took part in nation-wide climate strike on Friday.

Rosemary Penwarden was among a small group of protesters that cycled to the conference from Dunedin. She said the location of this year’s conference stood out as ironic.

“Queenstown lives on its tourism. It’s one of the iconic winter playgrounds of the world and it depends on snow. It’s this industry that’s holding today’s, and tomorrow’s conference, that are the major cause of the lack of snow,” she said.

Petroleum Exploration and Production Association chief executive Cameron Madgwick said the safety of delegates was being treated as a priority after protesters physically impeded previous conferences.

Mr Madgwick said he respected peoples right to have different views – but he completely disagreed with claims protesters were making.

“Roughly half our energy comes from oil and gas – 400,000 Kiwis use it to heat their homes, cook their food, power their business… government facilities use it. It’s a pretty essential energy source for us.”

He said moving to a lower emission economy was one of the topics being discussed at this years conference, including how the industry can participate, what the energy needs are for New Zealand and the world.

‘We’re also talking about what helpful policies and other things could help us even more. For example, in New Zealand, you can undertake carbon capture and sequestration, which is a way of reducing emissions. So, you know, we’re advocating pretty strongly for the government to put in place an enabling regulatory regime,” he said.

“Like everybody, we do want to reduce emissions. We just have a different view of how best to do that and the timescales for doing it.”