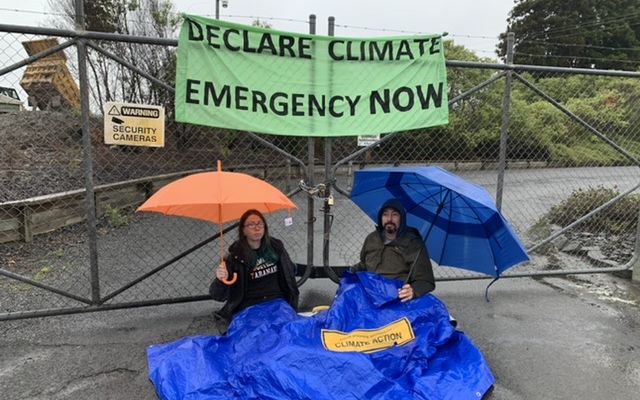 Anti-mining protesters have shut-down work at the Rotowaro open-cast coal mine, near Huntly in North Waikato.

Spokesperson Felix Hoornaert said the coalition was due to protest at a Minerals Forum planned for Hamilton today, but when that was cancelled, the focus moved towards the mine, which is jointly owned by Bathurst Resources and Talleys Energy.

He said protesters arrived at the gates at 7am.

“We have started at the gates around the main offices and the [mining] activity shut down and then we kind of extended to few extra gates around the site. We are currently occupying four different gates and we greatly impacted operations of the mine today.”

He said there were just over 30 activists protesting which is expected to last all day.

Hornet said police had turned up but were not communicating with them directly.

The coalition wanted to send a signal that companies like Bathhurst did not have the public’s best interests at heart, he said.

“They are only acting in their own agenda and with their own profit in mind, while they are actually jeopardising our future when they do that.”

He said the goal was to permanently shut down all mining in New Zealand.

“We want [Bathurst] to recognise that and start a conversation and not pretend business as usual can continue.”

Police said some protesters had been arrested after some members of the group chained themselves to an internal gate within the mine, blocking access.

They have been removed from the area.

In a statement police said: “While police recognise the lawful right to protest, our priority is to ensure safety and uphold the law. In this instance it has not been safe for the protesters to be in this area.

“Police will remain at the site and will continue to respond appropriately to any issues that may arise”.