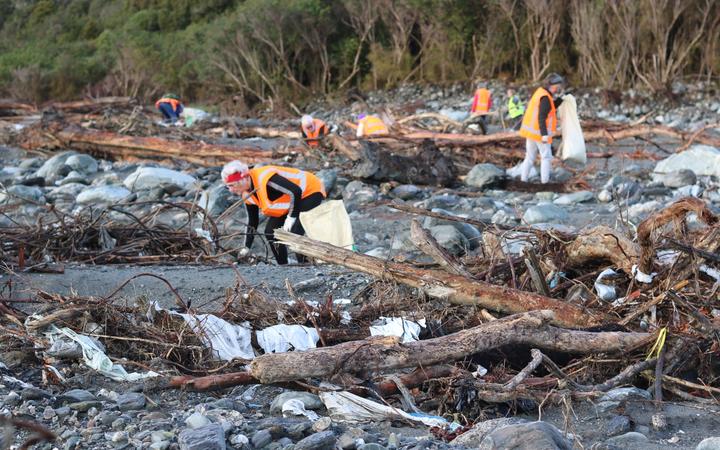 Westland District Council could be lumped with a $2.8 million bill and “significant consent applications” to fully protect the Fox River from future rubbish spills.

‘Operation Tidy Fox’ will draw to an end today, after a disused landfill split open in flooding in March, spewing rubbish across South Westland.

Over 850 volunteers, NZDF staff and DOC workers removed more than 13,000 bags of rubbish, but the landfill – which is covered by geo-fabric and rocks – is still vulnerable to heavy rains and extreme weather events.

Council Assets Manager David Inwood said options to seal the landfill were still being assessed by the council with input from DOC and the regional council.

He said any further rock protection work would only be an interim solution when taking into consideration that New Zealand’s largest active landslide was at the head of this valley – and the fact that 60 metres of land had already been lost to the Fox River when the landfill broke open.

The second option, to remove all the landfill’s contents to a new location, required significant consent applications and compliance with the National Environmental Standards for contaminated soil, he said.

It would cost about $1.8m to move the rubbish to a consented landfill at Butlers, plus $1m to create a new cell, as the rubbish would use most of the landfill’s remaining life.

But Ōkārito local Mike Bilodeau, who first organised the volunteer army, said he was concerned about a lack of urgency when it came to protecting the landfill’s rubbish.

“I don’t think people understand the scale of the issue,” he said.

“At the moment if you actually go and you walk across it, there’s pieces of rubbish and metal and stuff like that sticking out of it. We don’t even need to have a weather event like the one that happened at the end of March.

“It’s just a matter of time – if the water comes up in any way and washes through, that landfill is just going to tear it open and start pulling rubbish out again.”

He said if the landfill ripped open again, he doubted that they would see the same level of volunteer support.

Forest & Bird spokesperson Nicky Snoyink said it was clear central government would need to intervene and get ahead of the game, so another Fox Glacier spill did not happen.

She acknowledged the government was looking into the protection of legacy landfills around the country, but agreed “serious urgency” was needed.

David Inwood said the council had obtained technical support from experts, and was working through this process of consent applications and compliance with the National Environmental Standards for contaminated soil with a view to moving the rubbish.