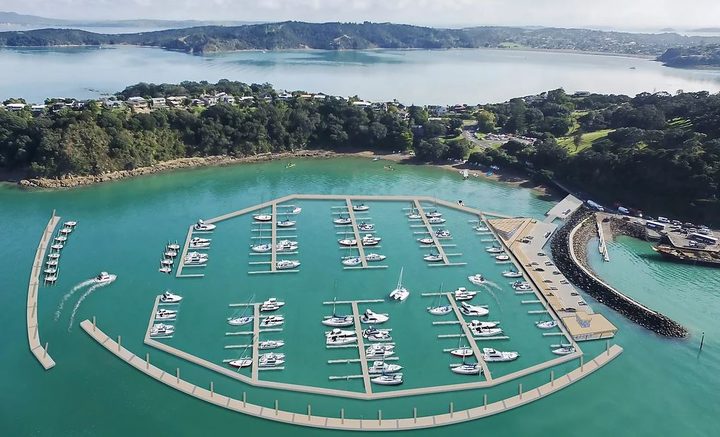 Developers of a planned marina on Waiheke Island have hit back at claims construction would disrupt Kororā little blue penguins, saying they are committed to protecting the birds, but a local bird rescue organisation isn’t buying it.

Waiheke Native Bird Rescue general manager Karen Saunders said she received a call from an ecologist working for the Kennedy Point Marina development on Wednesday asking her to be on site to remove any penguins from the artificial seawall, before work commenced on Thursday.

“The conversation was repulsive and I stated I wanted nothing to do with the deliberate destruction of known existing penguin habitat and this was illegal under the Wildlife Act and was animal cruelty.”

“We don’t take fit and healthy penguins out of their burrows for you to demolish it… I got pretty emotional about it.”

“I couldn’t believe they’d call me up, this big corporation, to do this the next day.”

But Kennedy Point Marina director Kitt Littlejohn said the ecologist contacted Native Bird Rescue because of [Karen Saunders’] interest and experience in this area and the purpose of the call was to invite her to be present during the works,

“Karen’s recollection of the conversation, as recorded in her [Facebook] post, is not consistent with our understanding of what was discussed.”

He said the construction company had since decided to move the rocks in two phases, with phase two which included the work where burrows were suspected, to be completed in about four weeks’ time.

“The rocks that are being touched (in two phases) represent only 5 percent of the total area of the artificial breakwater wall. These rocks will be moved temporarily and then returned to their original place within a maximum of three weeks (we will be aiming for 10 days but will depend upon weather). The burrows will not be demolished.”

He said the company was proceeding as if all identified burrows were in use and taking all precautions that they could to ensure they were protected and that the work programme had been approved by Auckland Council.

But Saunders said there more than two burrows at risk, because a DOC visit with a sniffer dog to assess the location of Kororā on 1 April, indicated 27 burrows along the rockwall.

She said any construction would be disruptive.

“They’ve just got no provisions for these penguins and it’s just not acceptable.”

“It’s been a really late breeding season this year and with some of the penguins not successfully breeding the first time they’ve gone into second breeding mode and two and half weeks ago we had a fledgling come in and what that means is its parents will go out and eat for like two or three weeks and then they come back and then they moult.

“When they moult, during that time, they’re not waterproof. So if they get scared out of that rockwall and go into the water they will get hypothermic – instead of having a wetsuit that will insulate them it’ll be like a woollen coat that will drag them under.”

“Little blue penguin monitoring is a condition of the consent for these works, however there appears to be some differing information circulating on this matter.

“We are keen to look into this a bit further on Monday, speak to the parties involved and work with our compliance team and the local board if any further action is required.”

Forest and Bird Auckland & Coromandel Regional Manager Lissy Fehnker-Heather said its immediate concern was the welfare of the penguins.

“We’ve spoken to KPM [Kennedy Point Marina] about these concerns and they’ve said they’ll take them on board. One of NZs top penguin experts has also recently offered to advise KPM which we are very keen to have happen.”

That expert was John Cockrem of Massey University, who yesterday wrote to the marina’s ecologist asking a number of questions.

“If the answer to any of these questions is no, then in my view the project should not proceed at the moment,” he said in the email which RNZ has been sent a copy of.

The email included questions such as, was there an opportunity for the penguins to settle into new nests before construction began and would a Department of Conservation authority be on site at all times when work was being undertaken on the habitat.