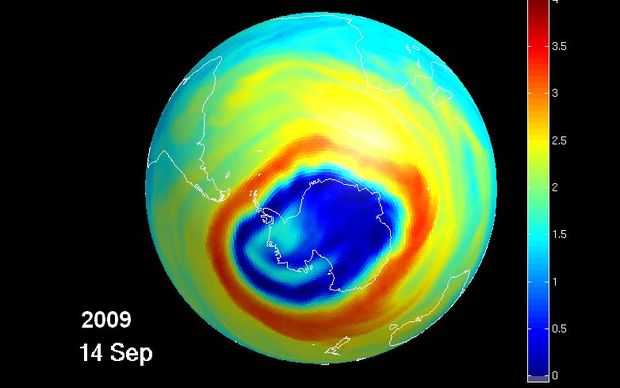 The 2020 Antarctic ozone hole is one of the largest and deepest of recent years, due to stratospheric weather conditions trapping cold air high above the frozen continent.

This year also saw the first significant ozone hole appear over the Arctic.

But overall, scientists say the ozone layer remains on a path to recovery.

The thinning of the ozone layer over Antarctica each southern spring was first detected from the ground in the early 1980s.

The first measurements that showed ozone depletion were made using a Dobson ozone photospectrometer, a machine developed in 1924.

About 120 were built and about 50 are still in use around the world today. There is a Dobsonmeter at Arrival Heights near New Zealand’s Scott Base and another at NIWA’s Lauder Research Station in Central Otago.

Scientists think of ozone as a column extending from the earth’s surface to the top of the atmosphere. It is measured in Dobson Units.

Average global levels of ozone are about 300 Dobson Units, and an ozone hole is defined as an extended period where ozone is less than 220 Dobson Units.

Ozone levels over Antarctica shrunk to a record low of 89 Dobson Units in 2006.

The annual ozone hole varies in size considerably from year-to-year, depending on regional weather conditions in the stratosphere. Extreme cold creates the right chemical conditions for increased ozone destruction.

The 2020 ozone hole is one of the largest and deepest of recent years.

On 6 October this year, ozone levels got down to 94 Dobson Units,

NOAA and NASA report that at its peak on the 20 September the hole covered an area of 24.8 million square kilometres, the size of North America. There was virtually no ozone in a 6.4-kilometre-high column of the stratosphere over the South Pole.

However, in terms of ozone holes over the past four decades, this year’s persistent ozone hole – which started forming in mid-August and is still going strong in late November – is only the 12th largest on record.

This year’s large hole is in contrast to last year’s, which was the smallest on record, covering a mere 16.4 million square kilometres.

The small hole in 2019 was the result of a sudden stratospheric warming event, whose higher temperatures were not conducive to ozone destruction.

First ozone hole over the Arctic

This year saw, for the first time, a significant ozone hole three times the size of Greenland form over the Arctic.

The international community moved quickly after the 1985 announcement of the ozone hole.

The Montreal Protocol on Substances that Deplete the Ozone Layer was signed in 1989. It led to the immediate ban on ozone depleting chemicals such as chlorofluorocarbons or CFCs.

The ban has been very effective. A 2018 assessment by the World Meteorological Organization (WMO) found that without the ban, the ozone hole would be about two and a half million square miles larger than it is now. Instead, the hole has been shrinking by about 1% to 3% per decade since the year 2000.

The WMO says that despite large variations in the size of the annual ozone hole, the ozone layer above Antarctica remains on track to be healed within 40-50 years.

To find out more, listen to the podcast to hear Richard Querel from NIWA talking about measuring ozone.

You can also hear UV expert Ben Liley from NIWA explain why New Zealand has such high UV levels – and no, it’s not because the ozone hole reaches here. Ben says that New Zealand is actually covered by a thicker-than-usual ozone ridge during spring.