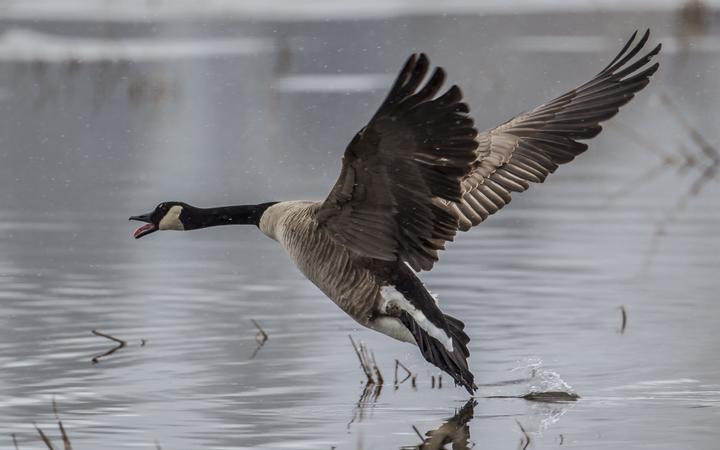 A Kapiti Coast local is frustrated about the number of Canada geese that he says are edging out native birds on a popular lake.

Geoff Amos has launched a petition asking the council to manage the birds, with annual culling.

He told Summer Times the geese are everywhere and are polluting lakes and ponds in the region.

After lobbying by mainly South Island farmers, the government removed them from the protected schedule in 2011, Amos said.

Lake Ellesmere and Lake Wairarapa are the two main areas in New Zealand affected, with the latter “just over the hill” from Awatea Lake which he sails radio-controlled yachts on.

“I’m appealing to the council to finally do something about this – they’ve talked about it for years.”

The impact on the lake includes the guano, the mess around the edges and the “muscling out” of native birds.

“They are quite an invasive bird unfortunately. They were introduced for hunting and shooting by our ancestors and frankly they’ve got out of control.”

He said they are all over the Kapiti Coast and he has included a lot of data about them for his website.

“They are quite an invasive bird unfortunately” Geoff Amos

He was not calling for total eradication, because that would be impossible, but there needed to be a cull to reduce them significantly.

On the small stretch of water he races yachts on as many as 300 or more could be found and the mess they left was also deterring walkers.

He said there were some interesting native birds, such as the blue duck or whio, on the lake and their numbers were reducing because of the Canada geese.

“That’s a real concern…the introduction of this bird [the Canada geese] does have to be controlled big time.”

The best time of year for culling was when the geese were moulting because they didn’t fly during that time, he said.