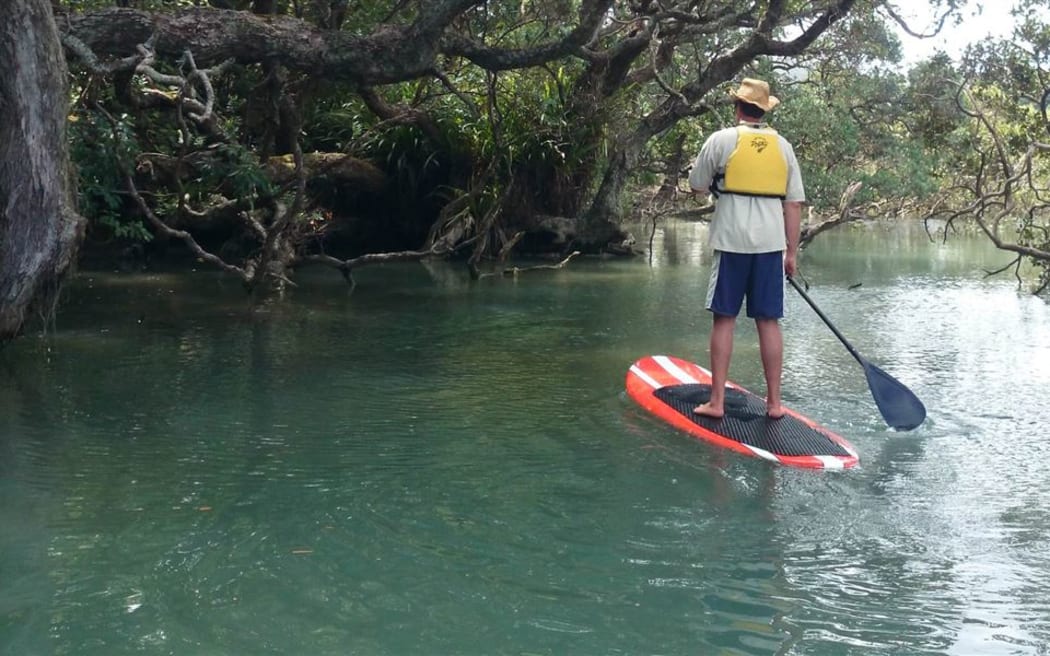 A marine scientist says the impact of helicopter noise at Te Matuku marine reserve at Waiheke Island should be looked into.

The Waiheke local board argued for this unsuccessfully, when two helipads were approved recently within 30 metres and 100 metres of the reserve waters.

At the landing spot closest to the beach at Pearl Bay, up to eight flights a day are allowed, at the other higher up, half that; to a maximum of 125 flights a year for each.

“There should be some acoustic monitoring in the water for potential noise impacts,” Radford said.

“There’s very little known about how helicopter noise may penetrate into the water.”

Auckland Council and the Department of Conservation did not pay heed to the Waiheke local board’s worries about this. The board recommended the council check with Radford, but it didn’t.

“The concerns raised sit outside the matters the plan allows us to consider on the consent,” the council told RNZ yesterday.

Its assessment of the application does not mention the marine reserve.

The council did not seek DOC’s view.

DOC said: “We would be concerned if there was an intention to adversely impact the marine reserve – but that is not apparent in the information that has been provided.”

Radford said the impact was worth studying.

“We may be displacing animals from certain areas if it gets too noisy. These areas may be important for reproductive or feeding grounds.”

NZ ‘a long way behind’

It was proven that airplane and traffic noise or vibrations could penetrate under the sea, though their impacts were less clear, while other sources of marine noise pollution, such as dredging or pile driving, required extensive monitoring at projects in Europe and the US, he said.

“New Zealand’s a long way behind implementing these kind of standards.

“I’ve been talking about this for a long time” but no one was really listening, Radford told RNZ.

The council gave resource consent on 16 June for the two helipads on land off Orapiu Road by Pearl Bay and Sandy Bay, which are part of Te Matuku Marine Reserve.

This was the same day the council agreed the consent applications did not have to be notified to the public.

They were lodged in March by Jarvis Securities and Te Matuku Holdings.

The next closest helipad, of the 51 others already on Waiheke, is 2.2km away. The island’s helipads typically do not involve any construction, as choppers simply land on the grass.

A DOC pamphlet describes the 690ha marine reserve as protecting one of Waiheke Island’s “largest undisturbed estuaries, unique in the Auckland region” where “marine plants and animals, along with their habitat, are able to thrive without fishing, shellfish gathering, pollution or other disturbances”.

The local board in its submission asked the council to order that the Te Matuku helipads should get a public notification, but – as has been the case with most, if not all, helipads on the island – this is not required and did not happen.

DOC director planning, permissions and land Tash Ryburn said: “In the case of the two helipads near Sandy Bay on Waiheke Island, we have not formally assessed these applications as our comment was not sought by the applicant and we were not deemed to be affected by Auckland Council.”

The chopper flight paths go out over the sea.

The local board argued: “Consenting flight paths in the soundscape of areas of natural tranquillity and isolation impinge on the reasonable expectation of tranquillity, more so when they are areas set aside by covenanting large areas of native bush and establishment of marine reserves.”

It was an offence to “wilfully disturb” a marine reserve, and the board feared a particularly large and noisy chopper was going to be used at the pad 30m from the beach.

The council should get independent specialist advice on marine disturbance, it said.

The consent application for the Pearl Bay pad said it would not disturb the ground, used a site beside a boat ramp and any choppers “will be elevated above these areas of interest on approach and departure”.

RNZ has been unable to contact the helipad applicants.

Associate Professor Radford said a chopper’s approach would take it close to the sea’s surface.

Ryburn said DOC appreciated “that developments that are proposed on private land adjacent to some of these environments, like the marine reserve at Te Matuku, are a source of particular concern for local communities”.

“More generally, DOC’s concerns in relation to helipads and helicopter movements on Waiheke are limited to situations where they might have adverse effects on priority conservation values such as native bird colonies or public conservation areas with protected native species, or the behaviour of marine mammals such as whales or dolphins.

“Any breach of regulations that govern the use of helicopters over marine mammals would also be a concern.”

It was doing research into aircraft and jetboat noise impacts in national parks, to help with operational settings in DOC statutory management plans.