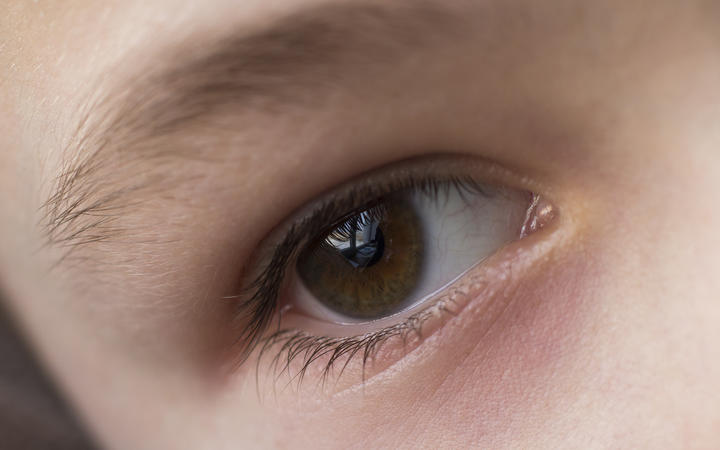 The project, run by researchers at the University of Auckland, was awarded the Ministry of Business, Innovation and Employment’s gold status, reserved only for the crème de la crème of its funded projects.

‘If you’re at a railway station, you’ll notice that people’s eyes are tracking the train and they do this involuntary flicking movement.

“By looking for that motion in our patients eyes, we’re able to determine whether that person has good visual acuity or not,” he said.

To make this possible, a pattern is shown to the child which gets harder to see as the test goes on.

Dr Turuwhenua said the beauty of the test was you did not need to ask for an answer.

“For example, with an eye chart, you’re asked to read the letters of the chat and in this case, you basically just look at the eyes with the computer camera and then decide whether they’re able to see or not,” he said.

Dr Turuwhenua said a prototype had already been developed and clinical trials were set to take place in New Zealand, Australia, Canada and the US.

He said they’d already completed a study with children aged three to six, with promising results.

“We looked at three to six year olds is because there aren’t actually any standard tests for younger kids, so we were able to perform those tests as a comparison.

“But the idea is to use it on two year olds and younger because there isn’t an objective or a reliable objective way to test for visual acuity in those kids,” he said.

Auckland University professor at the School of Optometry and Vision Science, Ben Thompson, who’s currently in Canada, where he also works at the University of Waterloo, is involved with the clinical development of the project.

He said the research was particularly useful for detecting amblyopia, or lazy eye.

The condition affects one in 25 children to some degree.

“One of the physical aspects about amblyopia treatment is that the the earlier it’s detected, the more effective the treatment can be.

“But of course, it’s very difficult to detect vision problems in young children because they can’t complete the normal types of vision tests that we would administer,” he said

Currently there is no treatment for adults with amblyopia.

Mr Thompson said ultimately he wanted the device to be available in any health care situation, where young children were present.

“In New Zealand for example, it could be in Plunket room so we could see it in pre-schools and paediatricians offices in the US.

“We’ve designed the technology to be portable, and to be able to be used in a wide variety of different settings, so it could be in a community setting, it could be in a healthcare setting as well,” she said.

It was hoped a final product will be ready in just two years time.

MBIE’s Jez Weston said the project was given almost a million dollars in funding in 2015, but its surpassed expectations.

“Projects that exceed their objectives are marked with a gold status and in this case, as well as benefits to children through improved vision screening, the research is also contributing to development of industries in New Zealand,” he said.