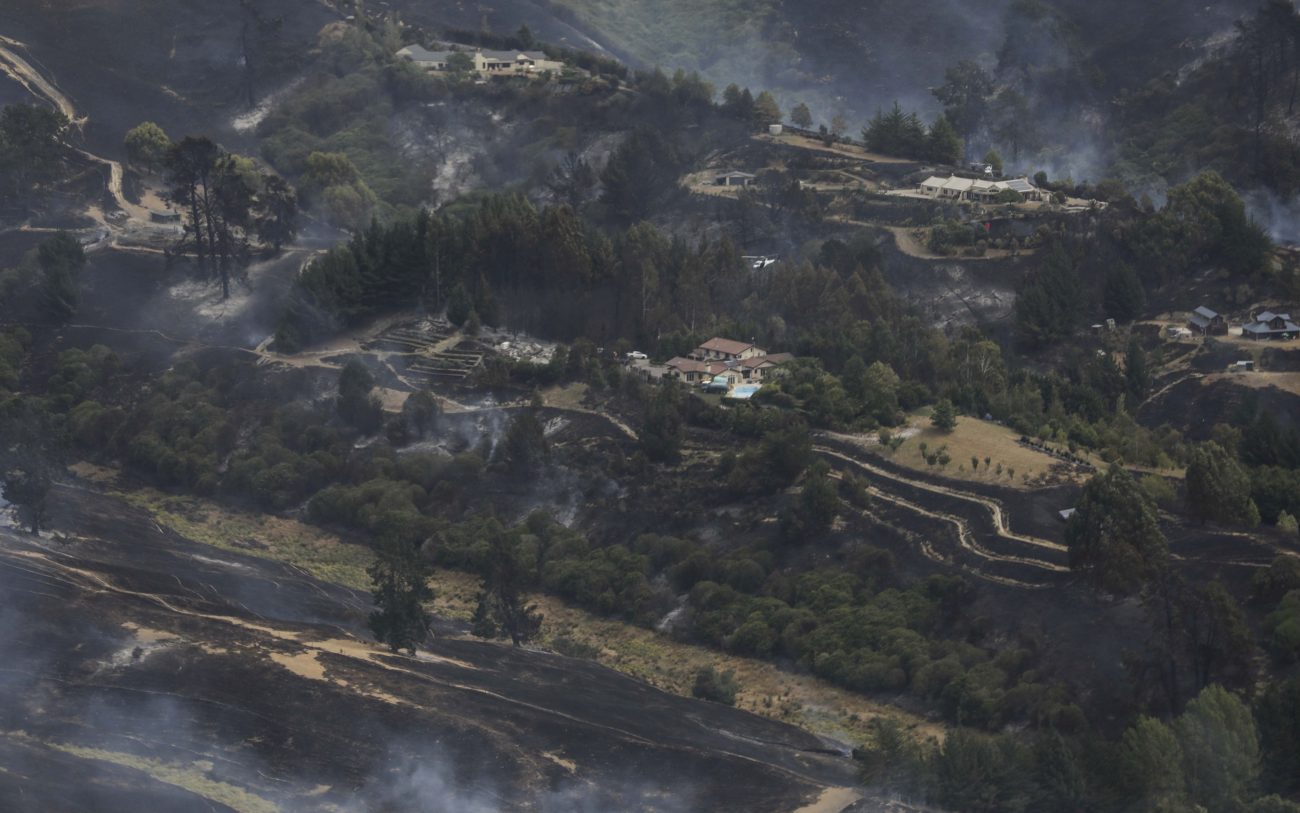 The hills are dry, with long rust-coloured grass resembling straw more than healthy pasture. It makes an ideal burning ground as the fires south-west of Nelson rage into their third day.

The flames have claimed three valleys, working north from Pigeon Valley, near Wakefield, through Teapot Valley and into Redwood Valley.

They wouldn’t be out of place during a California summer.

It’s in Redwood Valley, sitting only three kilometres from the sea, where the last fire of this scale ripped through the Tasman region.

That was in 1980, and it started on the land of Carol Hulse.

“I’ve been here a long time, and in 1980 there was a fire that started on this property actually, on the roadside, and it ran all the way to the sea,” Ms Hulse said.

“I have experience with a really nasty fire, but yesterday’s, and ongoing, it’s another class altogether.

“It just reminded me how quickly a fire can spread, and how frightening it can be.”

Ms Hulse lives on a hill overlooking Redwood Valley to the south.

About two kilometres away, the charred remains of a once colourful hillside are continuing to smoulder.

Helicopters with monsoon buckets shuffle in and out of the valley, dumping water on hot spots which threaten to extend the damage.

A large tree provided the only sight of visible flames, but plumes of smoke rose from the ashes, guided south by a stiff northerly.

Colin Garnett watched as the fire spread, extending its fingers into Redwood Valley.

The flames provided a stark contrast to the tall pine trees standing atop the ridge between Redwood Valley and Teapot Valley, he said.

“I was convinced that some of the houses over there were burnt.

“I couldn’t work out what was burning at times. Some of the flames just shooting up.

“I was just feeling for the people living up there who I thought had lost houses, but I think the firefighters have done an amazing job because there’s been some hard work done saving those houses.”

Mr Garnett weighed up several factors before deciding to see through the night, and not to evacuate.

“We packed the vehicle with things we deemed to be of value,” he said.

“It wasn’t until the smoke started to come our way that I started to worry, but then it went away again.

“I thought we were pretty safe, but I also went and checked that the back paddocks were open so that we had an escape route if we couldn’t get out to the road.”

On the other side of the road, closer to the looming fire, Ray Hawken made the decision to leave with a few treasured possessions.

“We packed up a few things, like the cat and a few family items, and the motorbikes, and headed down to Hope, stored them down there for the night,” Mr Hawken said.

“To me, it was pretty obvious that it was a good move to go, because it was getting pretty big very quickly.”

Mr Hawken has a number of sheep on his lifestyle block, and a large vegetable garden.

Some of the vegetables have suffered this year, given the high heat and lack of rain, but he has a healthy number of onions that will last him until December.

The weather has also allowed him to grow giant watermelons, something he wouldn’t always be able to achieve.

But when the watermelon grows large, the ground gets dry, and the condition for fires become perfect.

On the barren roadsides around the Tasman region, signs often remind motorists of the risks of fires.

They caution against ditching cigarettes out of the window, or of starting a campfire.

They also warn of water restrictions in the area, with so little rain over the past two months.

Fire and Emergency Tasman area commander Grant Haywood said investigators were flying to Nelson to look into the cause of the fire.

He said once the cause had been determined it would be made public.