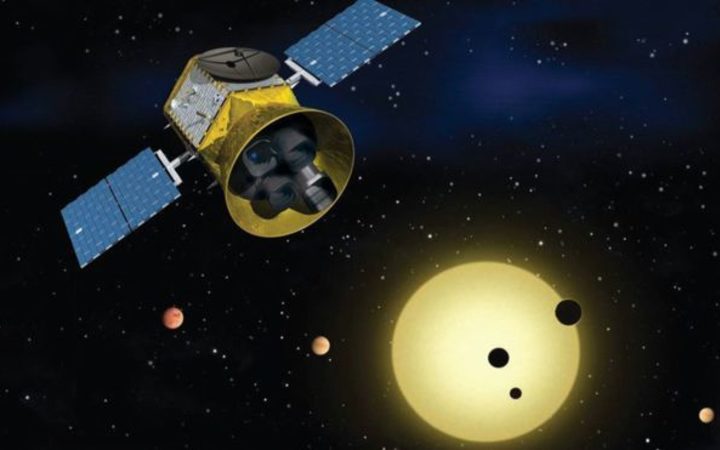 The US space agency is about to launch a telescope that should find thousands of planets beyond our Solar System.

The Tess mission will go up on a Falcon rocket from Cape Canaveral in Florida and survey nearly the entire sky over the course of the next two years.

It will stare at stars, hoping to catch the dip in brightness as their faces are traversed by orbiting worlds.

Tess will build a catalogue of nearby, bright stars and their planets that other telescopes can then follow up.

Key among these will be the successor to Hubble – the James Webb space observatory, due in orbit from 2020. Its powerful vision will have the capability to analyse the atmospheres of some of Tess’s new worlds, to look for gases that might hint at the presence of life.

James Webb will “tease out the chemical compositions of those atmospheres and look for whatever’s there,” said Paul Hertz, the astrophysics director at Nasa. “People are very interested in looking for, what on Earth, are bio-signatures, such as methane, carbon dioxide, water vapour and oxygen.”

Tess follows in the footsteps of Kepler, a groundbreaking space telescope launched in 2009. It also used the “transit technique” to confirm more than 2,000 so-called exoplanets. But Kepler, for its primary mission at least, only looked at a very small patch of sky, and many of its discoveries were simply too far away or too dim for other telescopes to pursue with further analysis.

The Tess strategy will be different on a number of fronts. First and foremost, it is a wide-field survey.

It has four cameras that will map the sky in segments, dwelling on each one for 27 days at a time before then moving on to the next region.

In 24 months, the Transiting Exoplanet Survey Satellite (Tess) should have sampled 85 percent of the heavens, taking in some 500,000 stars – many of which will be among the nearest and brightest in the sky.

“We’re expecting to find 2,000-3,000 planets that are certainly below the size of our Jupiter and most of them below the size of Neptune; so, the ones that have the potential for being terrestrial, for being rocky,” said Jennifer Burt from the Massachusetts Institute of Technology (MIT), which leads the mission.

The interest will be in whether they are orbiting at a distance from their host star that allows for liquid water – a prerequisite for life.

For most of the stars observed by Tess, this special distance will be a short one. The reason is that the majority of stars out there are what are termed M-dwarfs, and these are smaller and cooler than our Sun, and therefore the zone of ambient temperature that would keep water in a liquid state is much closer in.

Another of the missions to follow up Tess data will be the Swiss-led, European Space Agency (Esa) project called Cheops (CHaracterising ExOPlanet Satellite). This telescope should be ready for launch by the year’s end.

“Tess will tell us where and when to point,” said Cheops’ Esa project scientist, Kate Isaak. “Our purpose will be to very accurately measure the size of planets that have already been identified. If we know their radii and we know their mass, then we can talk about their density and what their likely composition is. Are they rocky? Are they water worlds? Are they gaseous?”

Bill Chaplin is an astroseismologist from Birmingham University, UK. He is interested in the variations in the brightness of the stars that will be observed by Tess.

This variability is a consequence of resonances in the outer layers of the stars, and it allows the British professor to pull out a lot of extra information.

“We can measure the stars’ fundamental properties. We can say how massive they are and how old they are. In addition, we can form a picture of what the inside of a star looks like. So, in essence we can do the equivalent of an ultrasound scan on them.”

Lift-off for Tess’s rocket is scheduled for 6.32pm local time (10.32am NZT). The satellite will fly with the Falcon for 44 minutes before being ejected on to a highly elliptical path around Earth.

Mission planners have designed a novel orbit that will see Tess corralled by the gravity of the Moon. This will lead to it using very little fuel to manage operations, enabling the mission to keep on working for a couple of decades, or for as long as Nasa finds value in its science.

A good many of the new planets will be relatively close – within a few dozen light-years of Earth. That is still too far away for humans to visit, but George Ricker, the Tess principal investigator from MIT, seems confident that technologies will emerge this century to allow robotic probes to reach some of his satellite’s discoveries in a reasonable timeframe.

“We can imagine an armada of nano-satellites that will be sweeping out from the Earth to send back information,” he said. “That will be a lasting legacy of Tess.”