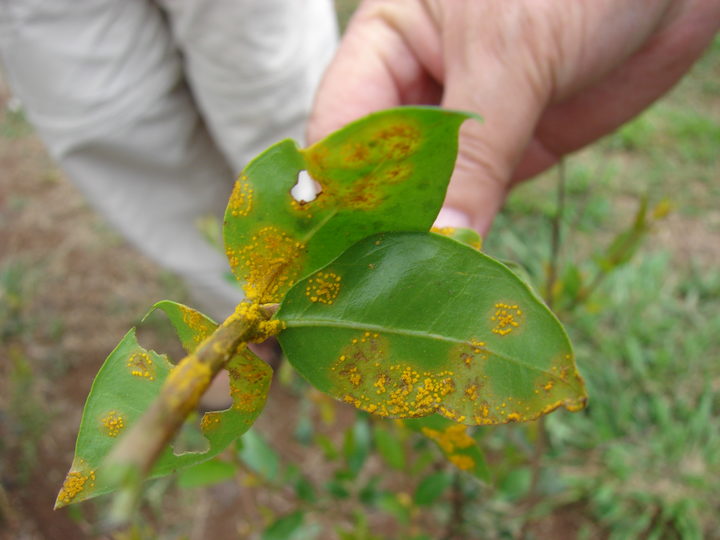 Myrtle rust is an introduced fungus with super powers that give it the ability to kill its host plants.

It has been spreading around the world, and after arriving in Australia eight years ago, it blew across the Tasman Sea to New Zealand just over a year ago.

What is myrtle rust? What damage is it doing to native plants and ecosystems here, and in Australia and Hawaii? And what science is being done to help us better understand this invasive killer? Our Changing World investigates.

Austropuccinia psidii, better known as myrtle rust, has been in Australia since 2010, and we were expecting it, even though – like all unwanted visitors – we were hoping it might stay away.

Unfortunately, this invasive fungal plant disease was detected in the New Zealand region for the first time in late March 2017. It was found on Kermadec pōhutukawa trees on subtropical Raoul Island.

In early May 2017, it turned up for the first time on the New Zealand mainland, in Northland, in a Kerikeri nursery.

Myrtle rust has now been reported from more than 580 infected properties, such as nurseries, parks and gardens, and that number grows daily.

It has just been confirmed in East Cape, bringing to 10 the number of regions it is in, covering most of the North Island as well as Tasman, in the South Island.

Rusts are a kind of fungus. They get the name rust because they produce large numbers of tiny rust-coloured spores.

Dr Mahajabeen Padamsee manages the New Zealand Fungarium at Manaaki Whenua Landcare Research’s and is a specialist in rusts. She says that rusts have a complex life cycle that involves up to five different kinds of spores.

“The most common way rusts move around is by urediniospores – also called summer spores,” says Mahajabeen. “These spores are wind-blown, and they can produce a lot of them.”

It is these tiny spores that blew across the Tasman Sea, from Australia to New Zealand, in the summer of 2017.

Mahajabeen says that myrtle rust is a particularly virulent form of rust. While most rusts infect just one species of plant, myrtle rust can infect an entire family. World-wide there are nearly 6000 species in the Myrtaceae family – everything from pōhutukawa, rātā and mānuka, to feijoa and eucalypts, monkey apples and bottlebrush. And to date myrtle rust has been found on more than 450 of them.

Wwhile rusts typically reproduce just once a year, if conditions are right myrtle rust can reproduce in as little as two to four weeks. Good growing conditions for myrtle rust are warmth – generally between about 15 and 25 degrees – high humidity and moist leaf surfaces, and at least six hours of darkness.

From Brazil to the world

Myrtle rust was first detected in Brazil in the 1970s. It was initially called eucalypt rust because it infected plantations of eucalypts.

Young leaves are particularly vulnerable to the rust, and in the first outbreak more than 400,000 eucalypt seedlings died in one nursery alone.

There are a number of different strains of myrtle rust. The one that is in New Zealand is the pandemic strain. This is widespread in the Caribbean and central America, California, Indonesia, China, New Caledonia, Australia, New Zealand and Hawaii.

Dr Janice Uchida is a plant pathologist at the University of Hawaii. She’s been studying myrtle rust since it was first detected on the island of Oahu in April 2005.

She says it was first detected in a nursery, but was then found to be very widespread on rose apple, which is an invasive weed.

Hawaii quickly discovered that myrtle rust was widespread and eradication impossible. By the end of 2005, the fungus had spread from Oahu to all but one of the other islands.

Myrtle rust is killing even large trees in Hawaii.

“The severity with which it attacked the rose apple trees was surprising to many people – that it would kill a tree,” says Uchida. “These are large trees, but every time it makes new leaves the rust gets in there and kills all the new leaves. So gradually over the years the trees got weaker and weaker.”

The dominant tree species on Oahu is a Metrosideros called ohi’a, that is related to our pōhutukawa. To start with there were concerns that it might be significantly affected by myrtle rust. But although it is now facing a crisis, myrtle rust is not to blame. The culprit is another fungus, Ceratocystis.

However, another threatened native species, Eugenia, has become more threatened as a result of myrtle rust.

Dr Geoff Pegg,  a forest pathologist with the Queensland Government’s Department of Agriculture, Fisheries and Forestry, says myrtle rust was first detected in Australia in April 2010, in a New South Wales nursery. They have no idea how the fungus reached Australia, he says, and it quickly spread.

It has reached all states except South and Western Australia and is now well established in native ecosystems in New South Wales and Queensland, “primarily east of the Great Dividing Range.”

Myrtle rust is of particular concern for Australia, as most of its native ecosystems are dominated by plants in the Myrtaceae family.

“There are over 2200 species that are native to Australia,” says Geoff. “Currently we are looking at around 350 species that have been identified as hosts [to myrtle rust]”.

Geoff says they consider around 45 species to be highly susceptible, and two species have already been so heavily impacted that their threat classification has been raised to Critically Endangered.

In the cooler southern states of Victoria and Tasmania, myrtle rust is only affecting plants in parks and gardens. But further north, it’s already having significant effects in native ecosystems.

Geoff says there is a slow decline over time, as there is a repeated cycle of trees getting infected, and producing new leaves and epicormic growth – new shoots at the base of the tree – that also get infected. Over time he says there is branch dieback and eventually tree death.

“Some of this,” he says, “has been alarmingly quite rapid. Some trees we’ve seen die in the first four to five years … this is even quite mature trees, 20-25 metre-tall rainforest trees.”

Geoff says that at several rainforest sites that have been studied, the whole ecosystem appears at first glance to be quite healthy, but a closer look reveals that the mid- and under-storey is being killed off.

Another issue is that as the canopy dies, and more light is let in, seeds in the soil germinate – and these seedlings are quickly killed.

Fire is an added risk. Australian plants have evolved to germinate and re-sprout after fire – and many Leptospernum species, such as mānuka, are getting knocked back as this new growth becomes infected.

Raoul Island lies 1000km north of New Zealand. It has a unique forest that is nearly totally made up of its own species of pōhutukawa, the Kermadec pōhutukawa..

For several years prior to the discovery of myrtle rust there in late March 2017, there had been regular checks on sentinel trees, that lined the main track between the island’s accommodation and the landing site on the eastern side of the island.

However, Tony Beauchamp, from the Department of Conservation, says that myrtle rust was first detected on the other side of the island, at Denham Bay. It was not where they’d been looking, and the infestation was already so well established that there was no way it could be controlled.

A follow-up trip to monitor the impact of myrtle rust on Raoul Island was made in March 2018. Tony says they found evidence of myrtle rust infecting new leaves and epicormic growth one to two metres above the forest floor, but little evidence of infection in the canopy.

Though older leaves and mature trees were doing surprisingly well, seedlings growing in the volcanic caldera were being heavily affected by the rust.

Kermadec pōhutukawa behaves slightly differently to the mainland species. It flowers almost continually and has several flushes of new growth each year. Beauchamp says this could be a good or a bad thing. If rust is less active during drier summers and only active during damper winters, that would allow some leaves to survive. However, if myrtle rust remains active year-round this would allow continuous infection.

Phil Hancock leads the myrtle rust response at the Department of Conservation. He says the first detection of myrtle rust in a native ecosystem on the mainland was in late February 2018, in the Mount Messenger wetland in North Taranaki.

Since then, he says myrtle rust has turned up in at least four more native ecosystem, including Mt Karioi and another nearby reserve, in the Waikato. Just last week it was confirmed in forest at East Cape, and this week it has been detected in the Wellington region.

Hancock says DOC initially tried to eradicate myrtle rust from Mt Messenger. The eradication team destroyed more than 2000 infected ramarama seedlings and saplings, and more than 120 dead and dying ramarama trees, before giving up as the infection was so widespread.

Most myrtle rust infections to date have occurred in ramarama, and Hancock says he thinks there is a real risk to the species.

“It’s the canary in the coalmine … and there’s a real risk of ramarama being lost.”

The main focus of DOC’s myrtle rust response has been an extensive seed-collection and seed-banking programme.

New Zealand has just over 40 species of native myrtles, including pōhutukawa and rātā, mānuka and kānuka, ramarama and swamp maire.

Hancock says their target is to make about 450 collections of seeds from different species across a range of different areas.

The seeds go to the New Zealand Indigenous Flora Seed Bank, a collaboration between Massey University and Agresearch. They have their work cut out dealing with both the large quantity of seeds they get and the kinds of seeds.

Hancock says they don’t know how long small myrtle seeds such as rātā and mānuka will last in the seed bank. More problematic are large fleshy fruits, such as swamp maire and ramarama, as these die if they are dried out. There is research underway to investigate ways of storing these seeds and maintaining their viability.

All the experts Our Changing World spoke to for this story agree that it is still very early days.

Myrtle rust continues to appear at new sites, and it is too soon to know what its long-term impact will be in New Zealand.

The hope is that there will be resistance to the disease, and that at the very least we won’t be as badly affected as Australia, whose flora is much more dominated by myrtles.

A new approach to myrtle rust

Dr Catherine Duthie is the myrtle rust incident controller at the Ministry for Primary Industries (MPI). She has been co-ordinating a national biosecurity response to try and control each new infestation of myrtle rust before it spread.

However, on 6 April 2018 MPI announced that “the wind-borne nature of the disease means that containment has not been possible”, and it has a new focus on science and community management of the disease.

If you think you have found myrtle rust, the advice from MPI is to not touch it, as it is incredibly easy to move the spores. Take a photo and ring the MPI hotline for advice – 0800 80 99 66.