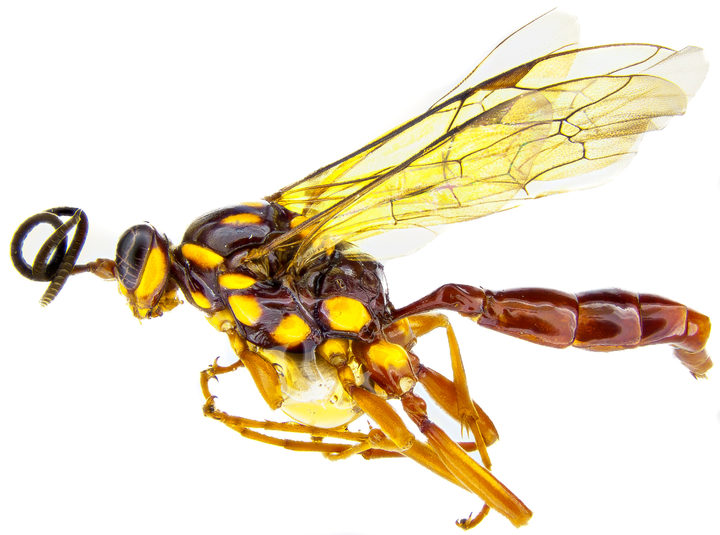 Wasps have a bad reputation – but Tom Saunders says many of them do not deserve it, and he is on a mission to raise the profile and restore the reputation of New Zealand’s native parasitoid wasps.

Part of his strategy has been to name a new species after the Harry Potter character Lusius Malfoy.

Mention wasps, and what comes to mind for most people are stinging social wasps, with their distinctive yellow and black colouration.

But for University of Auckland PhD student Tom Saunders, the word wasp conjures something quite different. He sees a small delicate fly-like insect with luminous golden wings, and striking gold body markings.

Parasitoid wasps have two pairs of true wings, a distinctive narrow wasp waist, and they are not capable of stinging.

“These wasps are known to be really important,” says Tom. They are keystone species that “have a disproportionate effect on their ecosystem. If you take them away – you notice [their absence].”

“The reason parasitoid wasps are keystone species is that they have a very intimate association with their hosts.”

In New Zealand, the hosts are usually moths and butterflies, but some wasps also target beetles and bugs.

Many species of wasp specialise in parasitising one species.

The wasps have distinctive long antennae, which are an important tool for detecting chemical signals given off by their host.

Once a wasp has found a likely area of vegetation, she wanders around on the foliage, drumming her antennae on the leaves. This helps her detect the volatile chemical odours emitted by a caterpillar. She is effectively smelling in stereo, which helps her hone in on a victim.

Once she has found one, she lay her eggs on it – or even in it, injecting them directly into the unfortunate larvae.

Tom says that what happens then is “one of those scenarios out of the Ridley Scott Alien films, where the egg hatches inside the caterpillar, and the little wasp feeds on the caterpillar’s insides. In most cases it feeds selectively, to keep the host alive for as long as possible to give it a nice cosy corpse to live in.”

After pupating, the newly emerged adult wasp finally bursts out of the host, to survive for just a few weeks as an adult. Raising the profile of wasps

Parasitioid wasps are not well studied here, but it is thought there are between 2000-3000 species in New Zealand.

Tom says they occur across the country, including in city backyards where they can be surprisingly common, especially in overgrown and unkempt areas.

For his Master’s degree Tom trapped and collected wasps from the suburban fringe in western Auckland. He collected 87 different species and it is an indication of how poorly known this group of insects that only 3 species had a scientific name.

Tom and his supervisor Darren Ward, from Manaaki Whenua Landcare Research, have since described and named one of the unknown species, and Tom was delighted to be able to take advantage of the name for that particular genus, Lusius. “The wasps reminded me of the Harry Potter character Lusius Malfoy,” he says, “because his blonde hair is quite similar to the colour of their bodies.”

“Also I started to think about how people have a really negative perception of wasps, and it’s similar with the Harry Potter series with how everyone knows that Lusius Malfoy is this massive villain and everyone hates him. But at the end of the series he’s pardoned for his crimes because he breaks away from Death Eaters and other evil wizards.”

Tom liked how the idea of redemption in the book character linked with improving the reputation of a misunderstood wasp. And it certainly focused attention on the group, with the wasp name Lusius malfoyi garnering media attention from around the globe.

All the wasps that Tom collected during his research are now housed in the New Zealand Arthropod Collection / Ko Te Aitanga Pepeke o Aotearoa. Tom has now turned his attention to a parasitoid wasp from Asia (Trissolcus japonicus, nicknamed the ‘Samurai Wasp’), whose host is the brown marmorated stink bug. This pest insect has been spreading around the world, and although it hasn’t reached here yet it is a significant biosecurity concern for New Zealand.

Tom is testing to make sure that the wasp does not parasitise closely related species found here in New Zealand. If it gets the all-clear, then it could be imported in the future to help control the pesky brown marmorated stink bug if necessary.