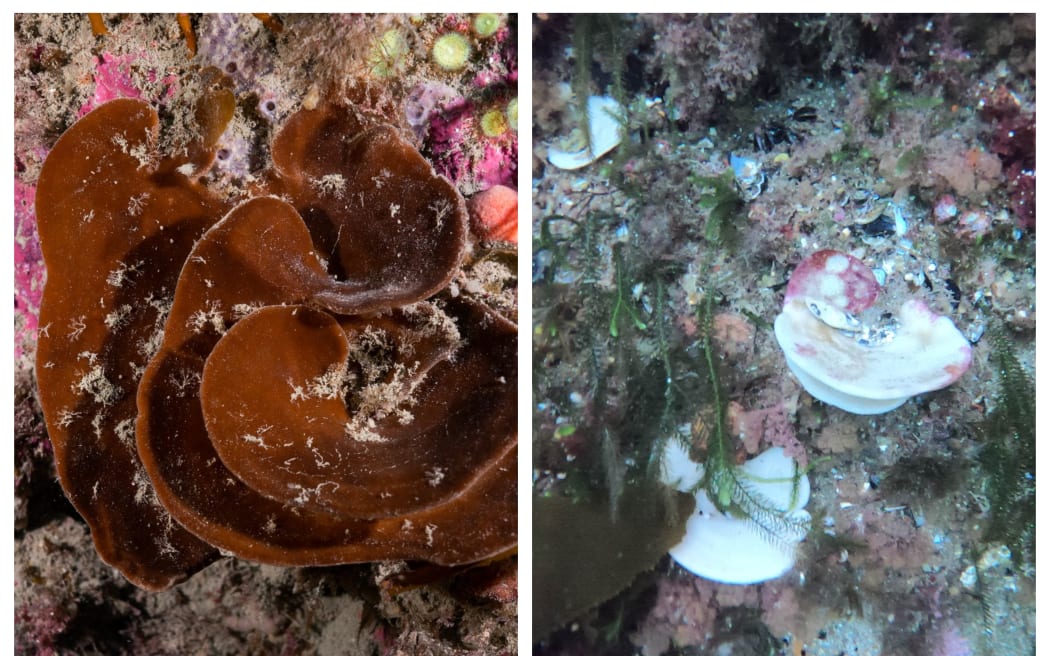 For the first time there has been a mass bleaching of native sea sponges in Aotearoa, raising alarm about the impact climate change is having on marine ecosystems.

The south of the South Island has been in the grip of an extreme ocean heatwave this summer, with April having the hottest ever water temperatures.

Under the water in Fiordland’s gorgeous Breaksea Sound schools of orange and pink fish nose among the green and crimson seaweed which waves gently in the swell.

Nestled among the kina and molluscs are sponges which should be a healthy, velvety brown.

Instead scores of the widespread and ecologically important species are bleached a shocking white.

He said damage like this has never been seen in New Zealand, and there were few reports of it happening in cold waters internationally.

The bleaching appears to have happened quickly, and could be widespread.

Scientists have checked more than a dozen places near the Breaksea Sound, and in some areas up to 95 percent of the sponges are affected.

The bleaching has also been spotted in Doubtful Sound.

The discovery has shocked Dr Rebecca McLeod a marine ecologist and chair of the Fiordland Marine Guardians.

“We really worried, [the scientists] presented this information to us at our guardians meeting last week and [there was] … stunned silence.

Waters around the South Island have had the hottest April on record.

Smith said there were extreme ocean temperatures in Fiordland – up to 5-degrees hotter than normal.

“What we’ve seen this summer is the strongest marine heatwave on the west coast of the South Island in 40 years.”

The warm waters have been a boon for anglers – with tuna and kingfish venturing much further south and being caught in decent numbers in Otago and Southland.

But Smith said interlopers could displace local species, while the warm water could also lead to outbreaks of disease in scallops, mussels, oysters and clams.

Bell said sea sponges were a crucial link in the food chain and there could be serious consequences for fish numbers if they were wiped out.

The researchers are going back to Fiordland in a few weeks to look further at the spread of the bleaching and the cause.

But Bell is worried.

“This could be the start of something really really bad for other ecosystems or the entire ecosystems in Fiordland, that’s kind of where it potentially goes – it’s pretty depressing,” he said.

McLeod said the bleaching made what was happening to the sponges obvious – it was possible other species were being damaged but it was harder to tell.

“What we’re hoping is that people will hear this story and think about what they’re seeing under the water and notice changes and bring those to our attention.

“Because it is a very vast and precious area, and we need lots of eyes under the water helping us out as we start to navigate this crazy new world that we live in.”