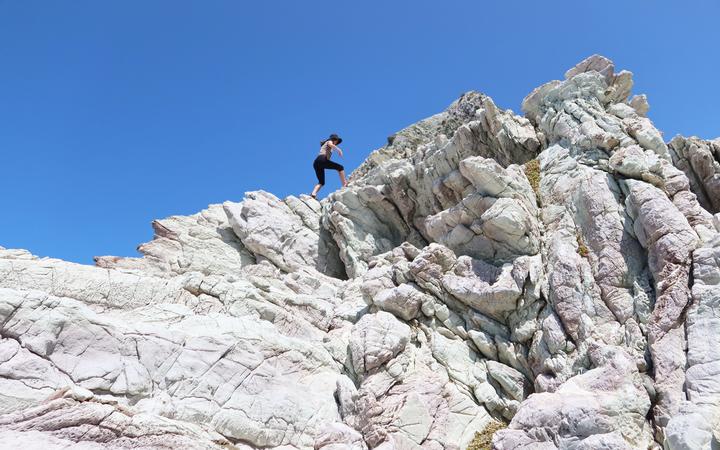 The Needles, and Chancet Rocks, have been placed into a 70-hectare Queen Elizabeth II (QEII) National Trust covenant by farmer Rick Stolwerk, whose family has owned the land since 2005. The family already had a 60ha covenant on their land.

The trust helps landowners protect cultural and natural heritage sites on private land through legally binding covenants, which are voluntary, but pass to all subsequent owners once put in place.

Stein said the Needles were a “spectacular” limestone outcrop.

“There’s half a dozen plants growing there which only grow on limestone. They’re threatened because limestone itself is not common. Behind the Needles are gulleys with big, native forests and … there’s not a lot of native forests left in South Marlborough.”

Stolwerk said the idea was to protect threatened coastal plants and an archaeological site that dated back to the 14th century.

He was looking to retire another 200ha of land from grazing and place it into a covenant in the hope of regrowing native vegetation.

“All in all, about a third of our land would be in a QEII covenant.”

The Needles was also one of 713 significant natural areas in the region protected for their ecological significance. Eighteen of those sites, or about 9200ha, were identified this year, which equated to “about the size of the plains of Marlborough”, he said.

Plans were in place to fence off the entire perimeter of Lake Elterwater, a significant natural area 4km north of Ward, after the council reached an agreement with nearby landowners.

Council environmental scientist Peter Hamill said the fence would not prevent cricket games from being held on the lake’s drier days.

The council was however unsure if it would ever dry out again after the 2016 Kaikōura earthquake raised its southern end about 24cm higher than its northern end, affecting its drainage.

Ward farmer Dave Barker had already stopped his cattle from accessing the lake and would use the fence to exclude his sheep.

“It is good that it is gradually being fenced up, because if we don’t, then the riparian vegetation doesn’t get to recover,” Barker said.

Native vegetation could help prevent erosion at the lake, caused by strong winds kicking up powerful waves on the lake’s surface.

Barker said part of the reason his family bought land near the lake six years ago was to look after it, and it “continued to surprise”.

People travelled from as far off as Rotoroa to see its uncommon birds, like all four of the nation’s southern crested grebes.

Ward farmer John Hickman said he had worked with the council in the past to fence off a large section of land at the north of the lake, on his property, and plant about 6000 native plants.

He had a small section of land still to be fenced off, he said.

“We’re trying to restore the lake to how it was. The benefits to the wildlife and as a visual amenity is pretty outstanding,” he said.

Hickman planned to set up a programme which allowed urban residents to help farmers plant vegetation, reconnecting them with the land. The first planting day would be held on 9 August.

People wanting to join the first round of plantings could email him at (johnhickman@gmail.com).