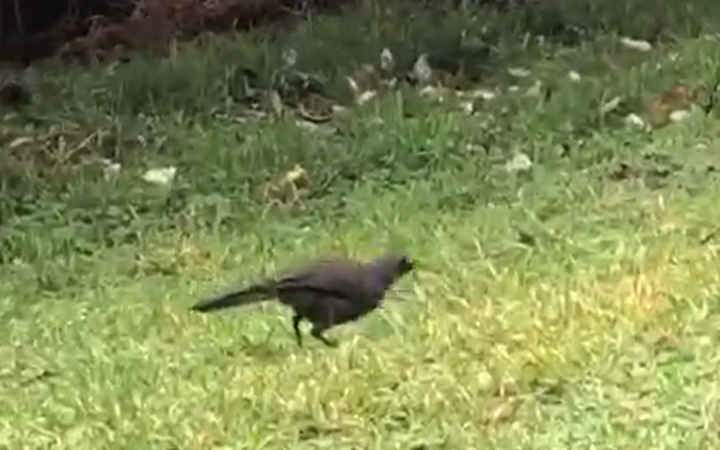 A hopping kōkako that was rescued from Auckland’s Hunua Ranges has died.

Walkers in the Cossey Dam area spotted the injured native bird last week and reported their concerns to the Auckland Council.

The kōkako was hopping about and spending an unhealthy amount of time on the ground.

Senior ranger Miranda Bennett said that was a worry.

“This makes it very vulnerable to predators, we know there are feral cats in that area, there are mustelids, dogs that might be being walked in that part of the Hunua Ranges,” she said.

Having an injured leg made it difficult for this kōkako to feed on berries and fresh foliage up in the trees.

Instead, it was “taking the easy option”, Bennett said, munching on daisies and dandelions on the roadside, but that was hardly a nutritious diet.

Bennett said they decided to mount a rescue mission, with help from the Department of Conservation.

A hopping kōkako that was rescued from Auckland’s Hunua Ranges has died this morning.

Walkers in the Cossey Dam area spotted the injured native bird last week and reported their concerns to the Auckland Council. pic.twitter.com/N36IoHkhp7

A team headed to the area on Saturday to try and track down the bird – since dubbed ‘Hoppy’ – but had no luck.

That meant an early start on Sunday morning.

“We started at 7am, found the bird about 8.30am, so I thought we were well on track here, but it then took another five hours to catch the bird,” Bennett said.

There were many failed attempts and they had to move their mist nests a number of times. They had to be very quiet, so they didn’t scare the bird. Sometimes Hoppy would refuse to be shepherded in the right direction. There were also other distractions – walkers, runners, dogs that were being taken for a walk.

But once safely in the custody of rangers, Hoppy was taken to the vet.

The juvenile kōkako was found to be very underweight, but there were no obvious external injuries.

“We don’t know yet what the long term outcome of its injury is – it doesn’t appear to have any physical, external injuries, so no wounds or bite marks, so this could be something that’s a long term injury, maybe it strained itself while trying to get itself out of a branch that it got caught in, or it could be a genetic or birth defect,” Bennett said.

Unfortunately, Hoppy was found dead in its cage this morning.

Vets are still trying to work out the cause of death.

There are more than 100 kōkako breeding pairs in the Hunua Ranges.