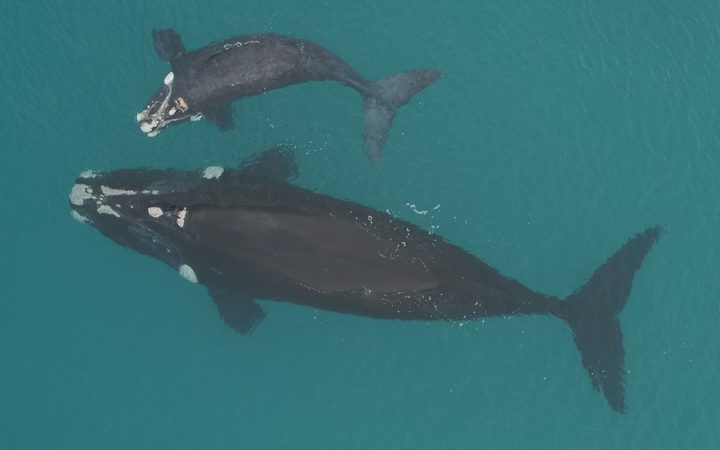 Scientists are asking for the public’s help in tracking Tohorā or southern right whales as they return to New Zealand waters.

After being hunted to the brink of extinction by the early 20th Century, their numbers are increasing.

But researchers suspect migration patterns are also being influenced by climate change.

Southern right whales are some of the largest creatures in New Zealand waters – but their lives and movements are still largely a mystery.

“Every pair of eyes and every photo counts. What you are able to see on the ocean and send to DOC will really contribute. We really need the citizens and the citizens’ science here.”

The team from Auckland University has teamed up with marine conservation charity Live Ocean.

Chief executive Sally Paterson said they’re encouraging people to send in their photographs of whales – but she cautions against getting too close.

“People out on the water need to be whale wise, we share the space with our whales, so there are some really common sense or basic things like keeping 50 metres away, or 200 metres if a whale is with a calf and keeping a no wake speed of 300 metres.”

The international ban on commercial hunting in 1986, and establishment of a marine sanctuary in the Auckland Islands in 1993 has allowed the southern right whale population to recover.

Paterson said the latest Department of Conservation (DOC) estimate – from 2009 – put the total population at about 2000.

“The whales are coming back to mainland New Zealand, to their old haunts, but we actually have very little idea of where they are going during this time. What this information will help us inform is how we protect our oceans in the future.”

“These whales were pushed almost to extinction and elsewhere in the world, northern right whales for example are really still on that precipice.”

Researchers will visit the Auckland Islands next month and begin their satellite tracking programme.

Southern right whale sightings are to be reported to the DOC hotline (0800 DOCHOT), or at doc.govt.nz.