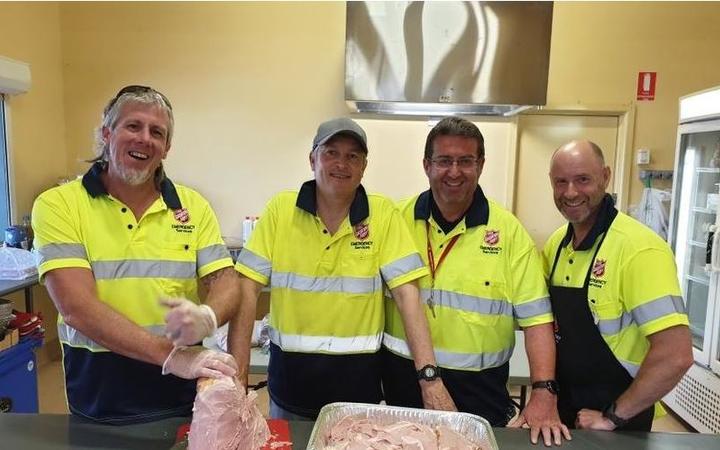 A Wellington social worker who has just got back from helping in a New South Wales community devastated by fires says the devastation is “beyond belief” and New Zealand workers have been in the thick of it.

Captain Gerry Walker is one of a team of eight from the New Zealand Salvation Army who recently returned from working at an evacuation centre in Naroomba, about 350km south of Sydney. The team arrived on 5 January to relieve their Australian Salvation Army counterparts, who had worked at the centre for 50 days straight.

“We drove down from Sydney, and after we’d gone about 150km, the remaining distance was just black on either side of the road. So you imagine driving from Wellington to Palmerston North, or Auckland to Whangārei, and all you see is black.

“It’s horrendous, the scale is beyond belief.”

The team helped support and feed emergency workers and those taking shelter at the evacuation centre – including families arriving with only the shirts on their backs, after losing their houses and farms.

Walker says in the surrounding area more than 300 houses have been lost and seven people killed.

“The fire came as close as 10km of the town, and on one day there was heightened anxiety – because if the wind had changed, the authorities had a naval ship just off the coast ready to evacuate people.

He said they were prepared to leave with a minute’s notice, and there was a strong sense of being “on tenterhooks”.

“The community centre was filled with people, many who’d been displaced and weren’t allowed or able to go back to their homes – some didn’t know if they had homes to go back to.

“So they were very distressed, very tired. Our job was to provide them with three meals a day, a smile, some support and encouragement, and we did a lot of listening, just giving people the opportunity to talk if they wanted to – and that turned out to be 14 to 15 hour days for us.”

The evacuation centre operated 24/7, with people coming in and out through the day and night, and many people from the community joining them for twice-daily briefings held by authorities, about what was happening in the wider community and where the fires were.

“The community centre was one big hall with a kitchen, and a couple of toilets – we had people, we had cats, and we had dogs, because people brought their pets, they’re part of the family.

“And at no time did any of the dogs face off with the cats, or the cats swipe the dogs. All the animals seemed to just get on. I think they knew something was happening, and this was where they needed to be, to be safe.”

Walker said food for the catering team came from the immediate community and donations from wider afield.

“I can remember one afternoon a father and his teenage daughter arrived in a car with a trailer on the back – they’d brought in a whole lot of water, food, canned food. They were from six hours north of Naroomba, they’d left at 4am, got to Naroomba and gave us all their stuff that they’d bought, and they turned around and drove home.

“Some came from Sydney just to drop off supplies, and other people delivered fruit and vegetables, which we welcomed, and we were able to use.”

One donation in particular led to a special, but surreal meal.

“We were given a whole lot of steaks, probably from a couple of restaurants. We had a chiller and generator which a lot of other people didn’t, and it was all brought down to us, and one afternoon I can remember us cooking 250 steaks on the barbecue for a meal.”

Walker said the wider Salvation Army effort in Australia had provided more than 150,000 meals to evacuees and emergency services during the fires, since September.

The New Zealanders provided a break for their Australian counterparts, who had helped at the Naroomba community centre and nearby Moruya for 50 days straight, and were now back on the job. A second New Zealand team from the church was also ready to go, if asked, Walker said.

“Certainly the local community were very appreciative of [us] from New Zealand coming over, but as we said to them, they came over to help us with the earthquakes in Christchurch 10 years ago.”

Meanwhile, there’s been a surge of people volunteering to become firefighters in Australia since the bushfire season started last year.

In the space of two and a half months, more than 25,000 people volunteered to become firefighters. The average annual intake is about 4000.

“This is a really big one for us, probably the biggest one in a decade but it sort of turns into an international community when you have this sort of tragedy going on and I think that adds to the willingness of local people to try and do what they can to help out.”

He said it’s heartwarming to see people volunteering and tragedies like this bring an awareness to the community.

The more people can take responsibility for their own patch of land, the less the services and the government have to dig deep to pick up the slack, he said.

“The more responsibility and awareness individuals can take as far as fire prevention and escape plans and stuff like that, the less strain that’s being put on the fire services and other support services to combat the fires when they do come.”