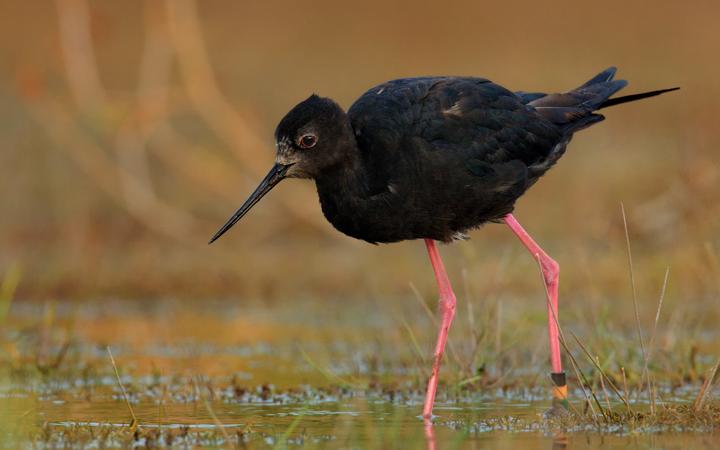 There are high hopes that a large predator-trapping effort in the South Island’s Mackenzie Basin will boost the survival chances of one of New Zealand’s most endangered birds.

One hundred and thirty juvenile kakī – or black stilts – have been released around the Godley and Cass Rivers and into the Tasman Valley where thousands of new predator traps have recently been installed.

The kakī is the world’s rarest wading bird and is only found in the upper Waitaki and Mackenzie Basins.

DOC ranger Dean Nelson said previously there was only limited trapping, and the survival rate for young birds was only about 30 percent.

The predator traps are part of the conservation project, Te Manahuna Aoraki.

Chairperson of Te Manahuna Aoraki, Jan Wright, praised DOC and other organisations for helping to bring kakī back from the brink of extinction.

Te Manahuna Aoraki has more than doubled DOC’s existing trapping network area, from 26,000ha in the Tasman valley, to more than 60,000ha across the kakī range.

DOC said the birds had been hatched and reared for release by DOC and the Isaac Conservation and Wildlife Trust. The juvenile kakī are released into the wild at nine months old, and reach adulthood just over 12 months later.

“I’m told kakī start squabbling like teenagers at about nine months so it’s the right time to release them into the wild, and it is wonderful to know these birds will have their best chance yet to survive through to adulthood,” Dr Wright said.

There are currently 129 adult kakī in the wild and DOC is hopeful that one day the kakī will be able to thrive without human intervention.

DOC has been managing the threatened species since 1981, when the population declined to a low of 23 birds.