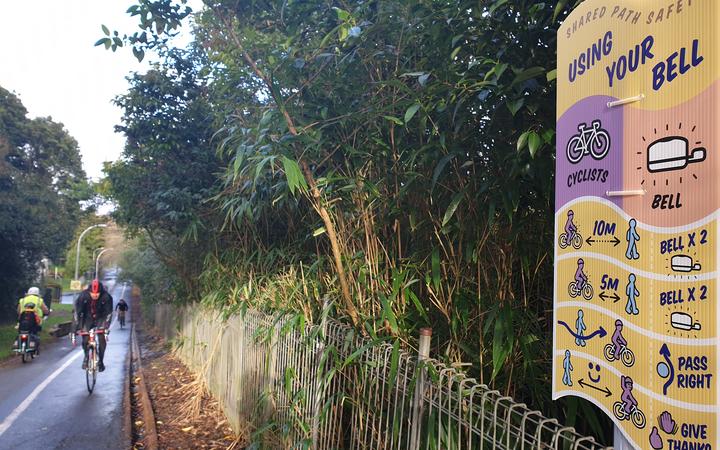 A central Auckland school community is continuing its fight to get a nearby cycleway upgraded after the project was stymied by the Covid-19 pandemic.

Newton Central School stopped its walking bus three years ago after several near misses and after abuse was hurled at children by some cyclists on the northwestern cycleway.

Auckland Transport was set to upgrade nearly a kilometre of the shared path with separated spaces for cyclists and pedestrians this year.

Locals are frustrated by the lack of progress, but Auckland Transport said the project was among the casualties of Covid-19.

Newton Central School principal Riki Teteina has been fighting to get the cycleway upgraded and the wheels back on the school’s walking bus.

He said the numerous near-crashes between students and cyclists led to the walking bus being canned.

“We’ve actually had one or two children being hit. We’ve had members of our community that have had serious injuries. It’s a really dangerous place – children and bicycles don’t mix,” he said.

“No one wants to have a child get hurt or injured. This is an accident waiting to happen.”

He says consultation and planning has already been completed for the upgrade, which fits in with the council and Auckland Transport’s strategy to get more people on bikes.

“In 2017, we worked closely with the council and Auckland transport – we’re now in 2020. The issue is bigger and bigger. There is a real issue here that we are bottle-necking into a place and it’s just too dangerous.”

A parent at the school, Phoebe Greenbrook-Held, said Auckland Transport tried to educate cyclists about using their bell and giving children a wide berth, but this was not treating the root problem.

“Unfortunately all those fixes are just short term – within a few months cyclist behaviour reverts. We really need the cycleway to be broadened, so children are safe to walk, cycle and scoot while adults do their commute to work.”

She said adult cyclists are the main culprits.

“We just found that adult cyclists would not slow down and ring their bells when they passed us, so the children wouldn’t know [they’re there] until the cyclists were on top of them. There also did not seem to be a lot of understanding that children will do silly or slightly impulsive things.

“[Cyclists] wouldn’t slow down as we needed to cross over the cycleway up to the bridge to get to the school.”

Bike Auckland spokesperson Carole Green said parts of the pathway were 20 years old and were not wide enough to handle the 1000 trips that cyclists on the route rack up per day.

She said people are keen to cycle or walk to work instead of driving and cyclists are behaving well on the whole – but there simply was not enough space.

“The most vulnerable users of any space should be the priority. Cyclists should be aware of pedestrians, should be careful around them, should give them enough passing space, should go slowly.

“I think in general they’re doing that … the fundamental problem is that there’s just not enough space for everybody.”

Auckland Transport declined to be interviewed, but in a letter to the Newton Central School, Auckland Transport’s Randhir Karma said the Covid-19 pandemic has put many projects reliant on funding on hold.

Randhir Karma said funding has been allocated for designing the cycleway and construction will start when and if funding is available.

He said Auckland Transport aimed to break ground in July 2021.