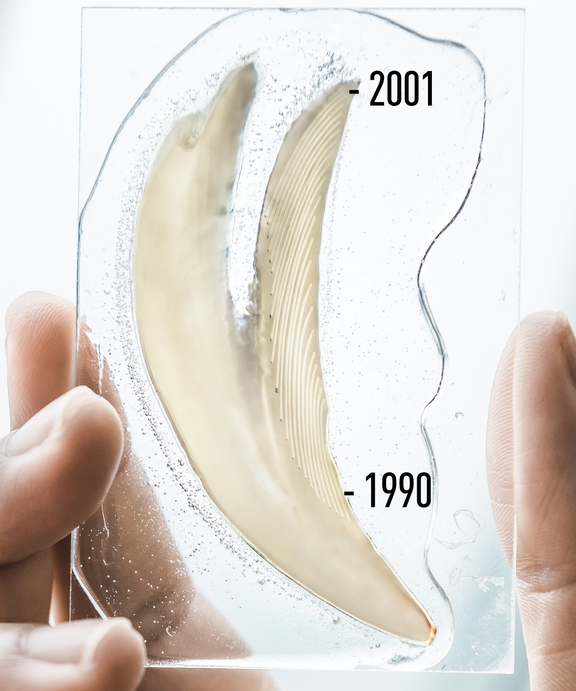 NIWA scientist Brittany Graham spends her working day unravelling the secret lives of some of the ocean’s largest creatures – from sharks and dolphins, to seals and sea lions. But that doesn’t mean she gets to spend much time at sea with them.

“A lot of my life is spent studying little samples from these animals,” she says. “Everything from whiskers of sea lions, to small tissue samples taken from them when they are tagged.”

These small samples, though, can answer big questions about what a sea lion is feeding on, for example, and where a shark travels.

Graham uses a tool known as stable isotope analysis. This relies on the fact that basic elements such as nitrogen, oxygen and carbon are made up of several different forms or isotopes, which vary in weight.

Graham says the ratio of nitrogen isotopes in our tissues is a direct reflection of our diet.

Different isotopes bioaccumulate in animals in the same way that heavy metals do – each animal at the bottom of the food chain might contain just tiny traces of a compound, but a top predator that has eaten many animals from further down will have accumulated all those tiny traces.

There is another factor at play, as well. At the same time that we are accumulating nitrogen, for example, we are also excreting some of it. Graham says there is a heavier and a lighter form of nitrogen, and we excrete the lighter form faster than the heavier form. This causes the heavier form to become more concentrated in the tissues of animals that are further up the food web.

This information is used to work out where an animal sits in a food web – whether it is a plant eater near the bottom of the web, or a predator such as a shark that is at the top.

Graham’s work with tuna, which are fished around New Zealand in summer, shows they travel to New Zealand waters to feed for a while before heading away again to the tropical Pacific.

This broadly ties in with other work that used tags to follow the movements of the tuna – but Graham says her data also showed some unusual patterns.

“The pattern is quite random, which is not what we expected. We expected that all the tuna would come from the tropics, enter New Zealand waters in the summer when they warm, and then leave when the water starts to cool again.

“But it looks like they’re doing almost a yo-yo dance, down from the tropics and back up – the movements are quite random.”

Graham has also studied three species of shark which are accidentally caught in the tuna fishery – mako, porbeagle and blue sharks.

Her work confirms they are all apex predators, she says. She has also discovered that mako sharks show the same random pattern as the tuna, with individuals seeming to move between New Zealand and more tropical waters at different times rather than all at the same time.  Porbeagle sharks, on the other hand, seem to spend more time around New Zealand.

Graham has worked with sea lion teeth collected from the Auckland Islands by different teams of people over many decades, since the 1920s.

The New Zealand sea lion population has declined significantly over that period, and Graham’s work is part of a large research effort to unravel what might be causing the decline.

Sea lions accumulate annual growth bands in their teeth, just as a tree has growth rings in its trunk. Graham can analyse each band in a tooth and see whether an individual’s diet changed over its lifetime.

She found large patterns of change across many teeth, and suspects large scale environmental variability or “shifts in the ocean conditions around the Auckland Islands” are the most likely reason. She says the most likely cause has been a change in primary productivity, such as where or when the phytoplankton – tiny plants that form the bottom of a food web – are growing.

Graham plans to look next at albatross feathers and penguin samples from the subantarctic, to see if she finds similar patterns.

“We’re trying to link all these species together,” says Brittany, “to understand the subantarctic and see if there are large patterns of change that are affecting these species, and causing some of the population declines.”

Why the technique won’t work for humpback whales

Stable isotope analysis can reveal interesting information about the diet and movements of many marine species, but there are some species for which the technique doesn’t work.

Humpback whales are one such species; although the animals move between feeding grounds around Antarctica and breeding grounds in the tropical Pacific, the only nitrogen isotope signature they have is from Antarctica. This is because even though they spend many months in tropical waters each year, they do not eat while they are there.

Teeth hold a record across many years but Graham uses blood samples if she wants to find out how an animal’s diet has varied over the previous days or weeks.

At the other end of the scale, she is starting a study of little-known beaked whales, using skulls held in the natural history collection at Te Papa. Each skull will hold a record of an animal’s entire lifetime, she says.

And what can a single sea lion whisker tell you?