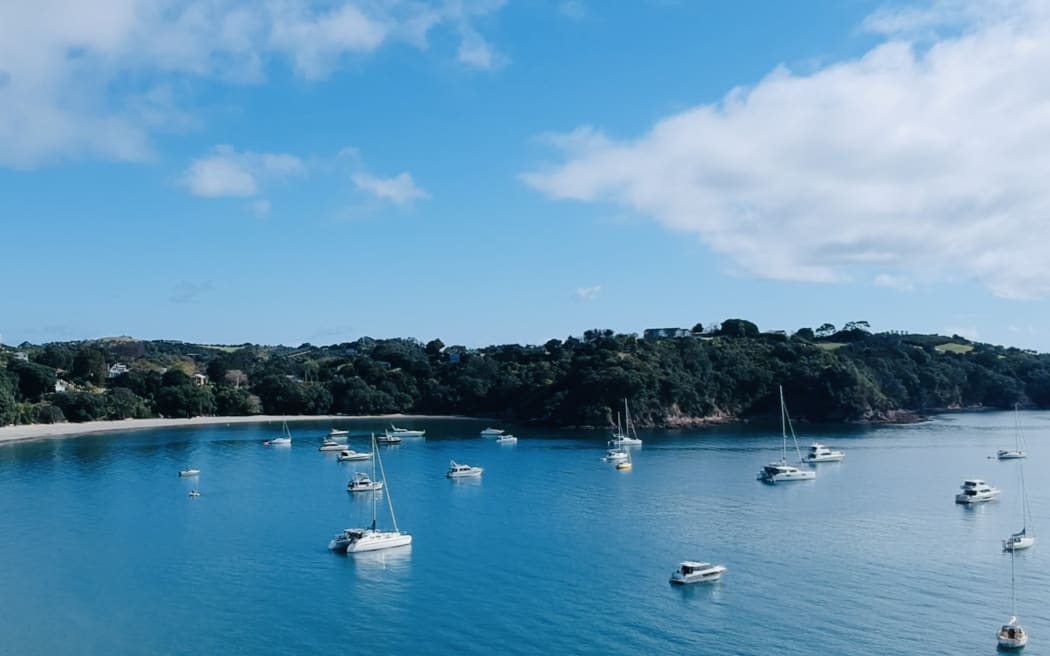 More helipads have been approved for Aotea Great Barrier and Waiheke islands in the face of community opposition.

Locals are expressing frustration at the rate consents are being granted and aim to pick up their lobbying of Auckland Council next week.

In March, when locals met with councillors to appeal for tougher rules, Waiheke had 49 sites approved for helipads – now it has 51, plus six new applications in the works.

The much more remote Aotea has four approved and three more in front of council planners, up from zero a year ago.

The planners are restricted to weighing up mostly just the noise impacts.

Waiheke local board chairperson Cath Handley said since March they had put a lot of work in to emphasising the wider impacts of some of the latest applications to planners – including those of two helipads approved last month beside Te Matuku Marine Reserve.

“It’s so deeply disturbing,” she said.

“Nobody can knowingly disturb a marine reserve, so I would have thought landing with full force right adjacent to the shore of a marine reserve would, at the very least, disturb marine life to a point where you’d need to understand its impacts before you consent it.”

Handley was among islanders who had hoped that when they appealed to the council, they were buying time – but they also feared the opposite.

“There is a flurry of people seeking consents, and we did warn council of this when we spoke to them, and the rate is actually higher now than it was when we spoke to council, of consents being applied for and approved.”

Aotea local board chairperson, Izzy Fordham, said it felt like they were losing a war of attrition.

“There is one, two, at least three pending applications at the moment.”

Given the three granted consents all in the same street, Greenside Rd, in February, April and June – as well as a fourth back in December a few kilometres away – Fordham expected these new ones would also go through.

“I mean, if you’ve got a short road with six properties in it, and five of them are wanting helipad, why couldn’t they just go for one and share? It’s kind of a little absurd.

“The last thing we need is another flurry of consent applications to go through before anything can be done,” Fordham said.

“As we heard … any possible plan change is a long way away. But we’re doing our best to keep lobbying for them to relook at that.”

The approval documents all set caps on flight numbers per helipad – most commonly two a day – and an overall cap.

“An annual cap has also been set across the other helipads on Greenside Road to ensure collectively, that cumulative effects upon the wider surrounds is being appropriately managed,” said one.

The two island local board reps, along with those from Waitematā, meet the council’s planners next week to continue lobbying.

In Waitematā, the opponents are counting a win over a helipad resource consent application that will now be publicly notified so locals get more say on it.

The lobbyists succeeded in March in getting councillors to tell the planners to update the guidelines they apply to helipads, to ensure consistency – except the update has not come out yet.

Planning committee chair Councillor Chris Darby is asking why not.

“I have been assured that verbally all the reporting planners have been called into sessions and been reminded of what they are supposed to be doing in assessing helipad applications.”

He was reasonably confident the applications till now would have been assessed correctly.

Council’s planners are also halfway through a study of chopper flight movements in the Hauraki Gulf, after claims by the Waiheke local board and community group Quiet Sky Waiheke they are uncontrolled and unsafe.

The results won’t be out until after the local body elections in October.

Council planning’s chief of strategy Megan Tyler put out an online opinion about helipads on Monday, saying they are working on finding a balance between competing interests.

They could not publicly notify helipad applications in general, but only “under special circumstances”, case-by-case.

One option depending on the study, was to change the Auckland Council District Plan to make it tougher on helipads, she said.

The latest five-year consent approvals for Aotea impose a one-off $1026 monitoring fee on the applicant.

They also state that all incoming choppers must have GPS tracking turned on, and their flight path logged.