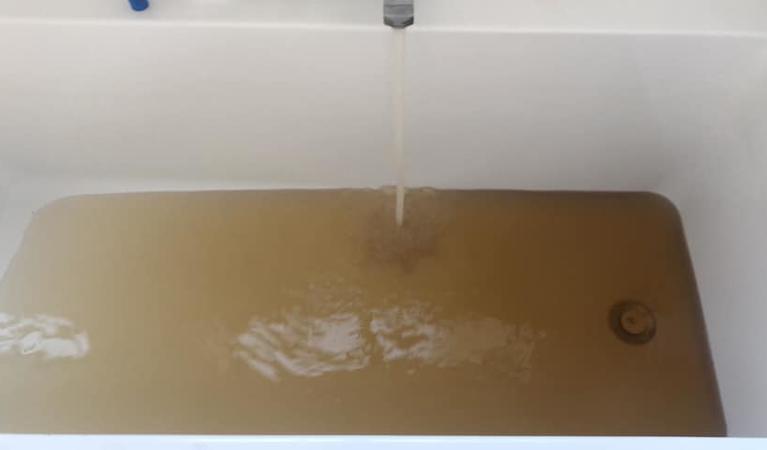 Showers like running mud which changes hair colour is among the complaints of residents of two small Hawke’s Bay communities fed up with brown and smelly water, a problem they say is worsening.

For two years, people in Te Awanga and Haumoana say they have endured brown water flowing from their taps.

Now they are worried the council’s promised fix isn’t going to deliver.

Te Awanga residents are used to dirty water, but Tim Durrant said on Saturday it was the worst they’ve ever seen.

“If you could imagine drawing a bath for your child and the water was dark, dark brown. Brown water in the drinking taps. People are having to go down to the Four Square, just about have to keep restocking every couple of hours, I imagine with boxes of water. And you know we pay our rates, we pay for the water.”

“Woke up to turning on a shower and the water was like running mud. So I passed comment on our Facebook page and then everyone started commenting on the fact that they had it at the worst they’d ever seen as well,” she said.

Hastings District Council said it received and responded to five reports from residents at the weekend.

In a statement its group asset manager Craig Thew said the cause of the “apparent increase” was being investigated.

“Things that can contribute include small variations in chlorine levels (chlorine reacts with the manganese) and changes in water demand,” he said.

Trafford, who has lived in Te Awanga for decades, said the troubles started when Havelock North’s drinking water supply was contaminated in 2016.

“We had the most beautiful water out here, I’ve been out here for 25 years and we were all very, very proud of how amazing our water was. And then it’s called council covering their butts and they upped all the chlorine since that contamination in Havelock and we’ve had nothing but problems ever since,” she said.

Durrant said as a result of what happened in Havelock North, councils were required to have a trace of chlorine in the water, but that caused problems when there were high levels of iron and manganese.

“My understanding is the manganese and the iron, there’s a reaction with it and it eats it all up, so they have to keep putting more chlorine in and I would have thought common sense would have been, how about not putting chlorine in until they get the new bore which is meant to have less iron and manganese and then switch it on,” he said.

Residents complained their water smelled like a public pool.

“Two years down the track we’ve got black tar filters full of manganese, we’re really fed up. People’s hair colour is changing. Every couple of days people are complaining on the local Facebook page of water problems and we’ve just had enough,” Durrant said.

Like many residents, he installed a water filter at vast expense. There’s not only the cost of the filter, but also paying a plumber to install it.

Typically filters last up to a year, but in Durrant’s case his filter was getting overloaded every six weeks.

He said local residents had done a deal with the filter suppliers, but it was still over $200 every time they replaced a filter.

Trafford got so frustrated with the terrible water pressure as a result of her water filter, she disconnected it.

Locals have pinned their hopes on the launch of a new bore, which supposedly has lower levels of manganese.

It was blessed two weeks ago, and although it’s supposed to be operating now, they’re still waiting.

Trafford does not believe the new bore is responsible for the weekend’s dismal water, but she would like the council to front up and explain what is going to happen and what people should expect.

“I would like the council to give us a date that the new water supply is turned on. I would like them to say for three days after that, you may see whatever it might be coming through the system and then we expect that it to be clear and that there would be no issues,” she said.

Thew said the new water bore and plant was going through its commissioning phase including checking the systems that allow its real time performance to be monitored remotely.

He expected it to start supplying water from the new source from mid November, saying the new bore had excellent water quality.

He warned residents could expect some discolouration as the new water mixed with the existing pipe network, although the council would be monitoring this.

Finally, the council urged residents to contact it directly rather than comment on closed social media pages, saying it will respond to all complaints.