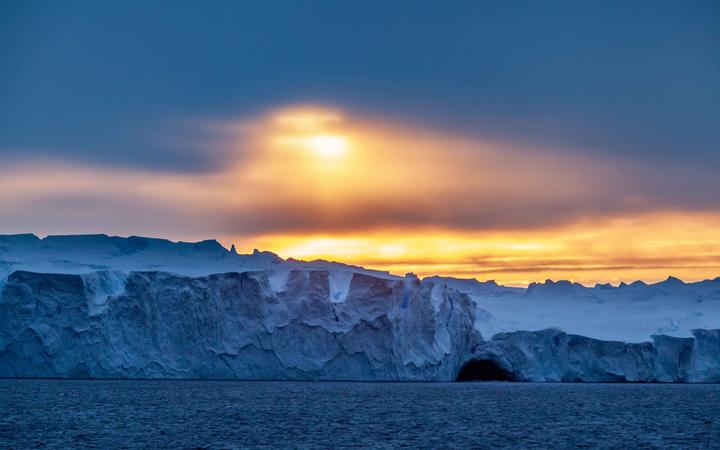 Australian Antarctic expeditioners have discovered an enormous, 2-kilometre-deep canyon underneath a glacier that may make it more vulnerable to warming oceans.

The discovery also indicates the Vanderford Glacier in East Antarctica once extended 60km further than it currently does and had a significant role in rising sea levels.

Voyage leader Lloyd Symons said the canyon extended at least 3.5km underneath the glacier, which might be influencing how quickly the ice was melting.

“The fact that there is such a deep canyon beneath this glacier would perhaps allow the possibility for warming waters to get underneath the glacier,” Symons told the ABC.

“One of the issues for Antarctic glaciers at the moment is them being eaten away from underneath by warming waters coming down from the north.”

The Southern Ocean circulates warming waters from around the world, pushing them deep towards Antarctica where they lap against the colder ice.

“If there is a deep channel underneath this glacier, then it’s possible that may not bode well for the Vanderford Glacier, but that, of course, requires further study,” Symons said.

Satellite data from NASA indicates the surface height of the Vanderford Glacier has shrunk by about two metres since 2008.

East Antarctica has long been considered to be less affected by climate change than West Antarctica, which is below South America.

But recent studies of NASA satellite images indicate that is beginning to change, particularly around Vincennes Bay where the Vanderford Glacier ends.

Trench indicates where glacier once stood

The 60km trench extending away from the glacier is likely to indicate where it once stood before melting.

“This immense canyon that we have found really just gives us a very clear indication of just how big this glacier was perhaps tens of thousands of years ago,” Symons said.

The discovery was made by Australia’s new icebreaking ship, Nuyina, while testing cold water systems near the glacier and Australia’s largest research station, Casey.

“The Nuyina is demonstrating that Australia has opened the door to new levels of polar research that will help us unlock secrets of Southern Ocean maritime ecosystems, strengthen our reach inland and our understanding of the world’s climate,” Ley said.

Floyd Howard was one of the acoustics officers who mapped the canyon over a 24-hour period.

“We were using the multi-beam echosounders to map the ocean floor as we were in an area with limited charts,” Howard said.

“The multi-beam sends out sound that bounces off the seabed and then it listens to the echoes – like a bat or a dolphin – and measures how long they take to return back to the ship.

“You would expect there to be a glacial trough in front of the glacier from when sea levels were lower, but we didn’t expect it to be so deep and so spectacular.”

The findings will now be shared with glaciologists and climate scientists who will be able to determine the impact this canyon is having on the glacier.