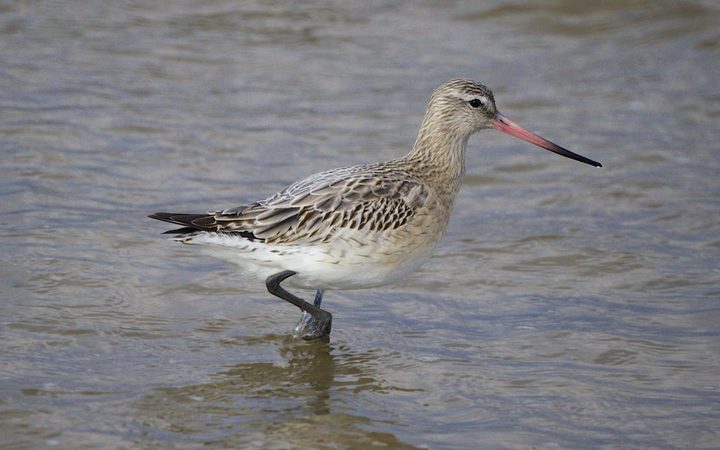 Food sources for the bar-tailed godwit on its annual journey to Alaska have been depleted, but researchers have devised a plan to keep them fed.

After leaving New Zealand in March, thousands of godwits have made it to China’s Yalu Jiang National Nature reserve.

However, after experiencing the coldest winter in almost half a century, clams at the mudflat have been dying off.

They’re an important food source for the birds, but there’s only around five percent of their usual abundance.

Associate Professor Phil Battley, from Massey University’s Wildlife and Ecology Group, said godwits would spend 40 to 45 days at the spot after a 10,000 kilometre journey.

“Even that flight to Alaska is still a 5,000 kilometre flight, they have a three-and-a-half to four day flight they’re preparing for, while also having to make sure they have enough energy for displaying and as a buffer in case they get there and there’s still snow of the ground,” he said.

He said if they did not get enough food, they might not have enough energy to breed either.

The godwits food sources have been continuing to decline over recent years, leaving their future unknown, he said.

“We don’t really know whether these birds would simply just go somewhere else and try to find food somewhere else, or if they’ll stick with what they know and try and deal with the situation because they are very habitual.

“An individual godwit will go back to exactly the same site on migration year after year, so that might be all they know,” he said.

“These people have come up with a plan to acquire a large stock of clams from agricultural farms further south in China, transfer them to the reserve and seed the mudflats over a period of time to provide a food source for these birds,” he said.

Mr Woodley said this had never been tried before.

“It’s groundbreaking stuff and it’s also an air of desperation because it’s a desperate situation, we know how important the site is, so it’s certainly worth trying,” he said.

They still need to raise hundreds of thousands of dollars to make it happen though, and the centre is acting as a referral site for donations.

However, with the godwits already at the mudflat and soon to be competing with Australia’s endangered great knots for food, the clock is ticking.

Nelson ecologist and ornithologist David Melville is currently working in China and said so far they had about half of the total funds needed, but any further contributions would be much appreciated.

“We are needing to act fast – the seeding of the clams has to take place on the spring tide series in mid-April, or not at all,” he said.