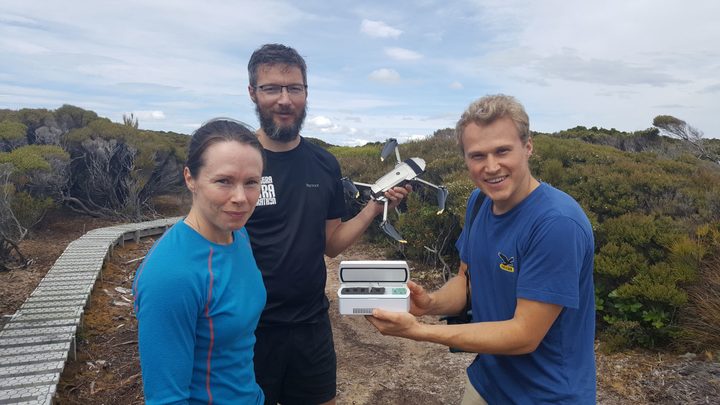 In a world-first for kākāpō conservation, the Department of Conservation’s Kākāpō Recovery Team has used a drone to fly the flightless bird’s sperm across Whenua Hou / Codfish Island.

The sperm, collected from the male kākāpō Arab and Stumpy was flown by the well-nicknamed ‘spermcopter’ and then used to artificially inseminate the female Esperance.

You can subscribe to the Kākāpō Files as a podcast – for free – at Apple Podcasts, Spotify, Stitcher and RadioPublic.

Kākāpō manager Deidre Vercoe says that she is delighted that the sperm delivery worked, and says it speeds up the process of artificial insemination (AI), hopefully increasing its effectiveness.

She says that it can up to several hours to walk from where the sperm is collected to where it is needed, whereas the drone can deliver it in less than 10 minutes.

This helps ensure the sperm is fresher when it is used in AI.

Scientist Andrew Digby says that the Kākāpō Recovery Team has been using AI for more than a decade. Three chicks were successfully fathered by AI in one breeding season, but the team has had less success in recent years.

Andrew says there are several reasons they use AI as a management tool. It allows them to genetically matchmake kākāpō, which is vital as the population descended from Stewart Island birds is very inbred. They are focusing, in particular, on using sperm from two birds with Fiordland heritage as they have a much more genetically diverse.

He says that AI should also boost the likelihood that resulting eggs will be fertile. The fertility of eggs laid by a female who has mated several times with different males is significantly better than females that mate once with a single male.

The Kākāpō Recovery team reports that it has carried out 11 artificial inseminations during this breeding season, but it won’t know if it has been successful until paternity tests are carried out in a few months.

The latest news on eggs and chicks

Of those, 83 have been fertile, and the fertility of a further 12 is still waiting confirmation.

Nineteen eggs have died before hatching.

Thirty eight chicks have hatched, and after one death 37 chicks are still alive. Twenty six viable eggs are yet to hatch.

Ten females have nested for a second time, after their first clutches were taken to be incubated artificially.

The first chick from the second round of mating, Pearl-2-B, has already hatched. Pearl was the first female to mate in mid-December and the first to re-mate.

Daryl Eason expects the total number of eggs laid to eventually exceed 200, but says he is disappointed with the low level of fertility.