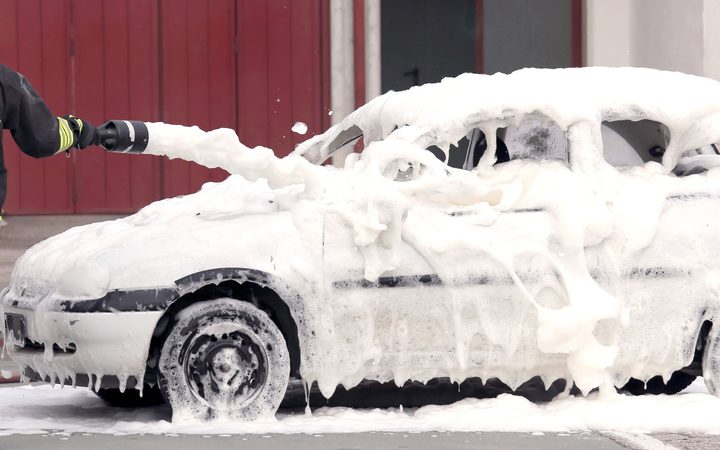 Investigations into toxic firefighting foam contamination have spread to a new 1600-home development in northwest Auckland, and to Devonport and Whenuapai.

The state-owned company doing the building on the former Air Force base at Hobsonville Point still does not know if the Defence Force used the now-banned foam there, 10 weeks after the military confirmed it had contaminated the water around bases at Ohakea in Manawatu and Woodbourne in Marlborough.

But the Homes. Land. Community said it knows for sure the chemicals – called PFOS and PFOA, very long-lasting and possibly cancer-causing – are not in the drinking water.

“The risks that the other sites have had don’t apply,” said chief executive Chris Aiken, because all Hobsonville Point’s water came through Watercare’s reticulated system.

Elsewhere, Defence said testing had now cleared the drinking water used by its personnel at bases in Linton, Burnham, Papakura and at the Devonport Naval Base.

“We can confirm that no PFOA or PFOS was detected,” it said in a statement.

However, the groundwater has not so far been tested under these bases – even though it is the groundwater that has spread foam contamination into drinking water outside Air Force bases at Ohakea and Woodbourne.

A third air base is also not in the clear, nor are former bases, according to the statement (Defence once more, as it has since December, refused to be interviewed and gave no reason why).

“We are still at the preliminary investigatory stage of the process at Whenuapai… The testing of previous NZDF bases is being considered,” it said.

It is not so far doing testing at its Wigram base, saying this base, like Hobsonville Point, is connected to the town water supply.

Hobsonville Point was last used by the Air Force around 2011. Up to 4500 homes are to be built there.

Yet Chris Aiken said he had had no formal contact from Defence.

Defence would not tell RNZ if it used the toxic foam at Hobsonville airbase; Mr Aiken believes it is rigorously checking its records, but those records may be patchy.

It was only last Thursday that he heard about the foam issue in a media report, he said, then immediately asked his team to begin checking all their previous environmental reports.

“We’ve done 15 years of testing on this site, of all manner, and we have not had evidence of any of these [firefighting] chemicals brought to our attention by our testing or by Defence Force testing.”

But he does not know if any tests specifically targeted to detect the foam chemicals in water or soil were ever done at the 170 hectare site.

Tonnes of soil were removed to prepare for house building so that might have got rid of any foam contaminants if they were there, he said.

This would, however, raise the issue of where this soil was disposed to and how.

US authorities have advised the chemicals can be ingested in dust.

A briefing paper on the foam investigation went to the Cabinet on Monday, from the Environment Minister David Parker

The focus was now on sites other than Ohakea and Woodbourne, the paper said, but “reassurance” water testing would also be undertaken in Manawatu, including of Bulls and Sanson’s public water supplies.

The Auckland Council was advised by consultants in mid-2016 that firefighting foam should be included as a potential contaminant at Whenuapai, which is 4 kilometres from Hobsonville Point.

RNZ has asked the council what was done about that advice and we await a reply.

As for a nationwide investigation into whether the banned foam is still in use, or stored, the Environmental Protection Authority said it had appointed an in-house team to investigate and contacted airports to get an idea of the scope of the inquiry.

The Health Ministry was still trying to find a lab to do blood testing, it told RNZ. It is so specialised that, in Australia, only two labs can do it, and only one lab in New Zealand appears to have the right systems.

However, it is also the case that New Zealand, which has ratified an international convention on these pollutants, is taking its lead from Australia, which hasn’t, for instance in adopting safety thresholds far above the thresholds of some US states.