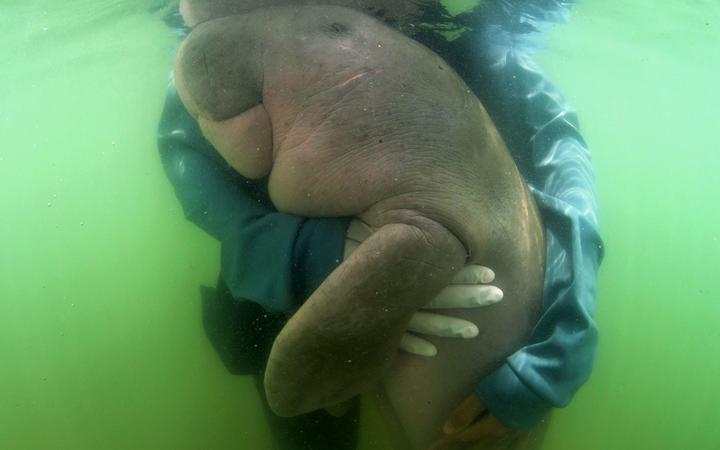 An orphaned dugong, made famous after it was rescued earlier this year in Thailand, has died.

The animal named Mariam died on Saturday from an infection that was exacerbated by bits of plastic that were lining her stomach, according to officials.

Mariam became an internet star after images showed her nuzzling into rescuers when she became stranded on a beach in April.

There are only a few hundred of the sea mammals left in Thailand.

The eight-month-old dugong was found ill a week ago and refused to eat. She died around midnight on Saturday after going into shock. Efforts to resuscitate her failed.

Chaiyapruk Werawong, head of Trang province marine park, told AFP: “She died from a blood infection and pus in her stomach.”

During an autopsy, several pieces of plastic including one measuring 20cm were found inside her stomach.

Nantarika Chansue, one of the vets who looked after Mariam, said: “Everyone is saddened by the loss, but it reiterates that we need to save the environment to save these rare animals.”

Mariam featured in live webcasts alongside Jamil, another dugong rescued shortly after her. The webcasts showed her being fed and receiving treatment from vets.

Many people have shared their sadness at her death on social media.

Good bye little princess Marium! You were #conservation superstar.
It’s heartbreaking to see you die by the people’s neglect towards environment. We are all guilty, as each thrown #Plastic bag, straw, bottle is killing an animal somewhere#saynotoplastic #Dugong #plasticpollution pic.twitter.com/ejRWceKSJE