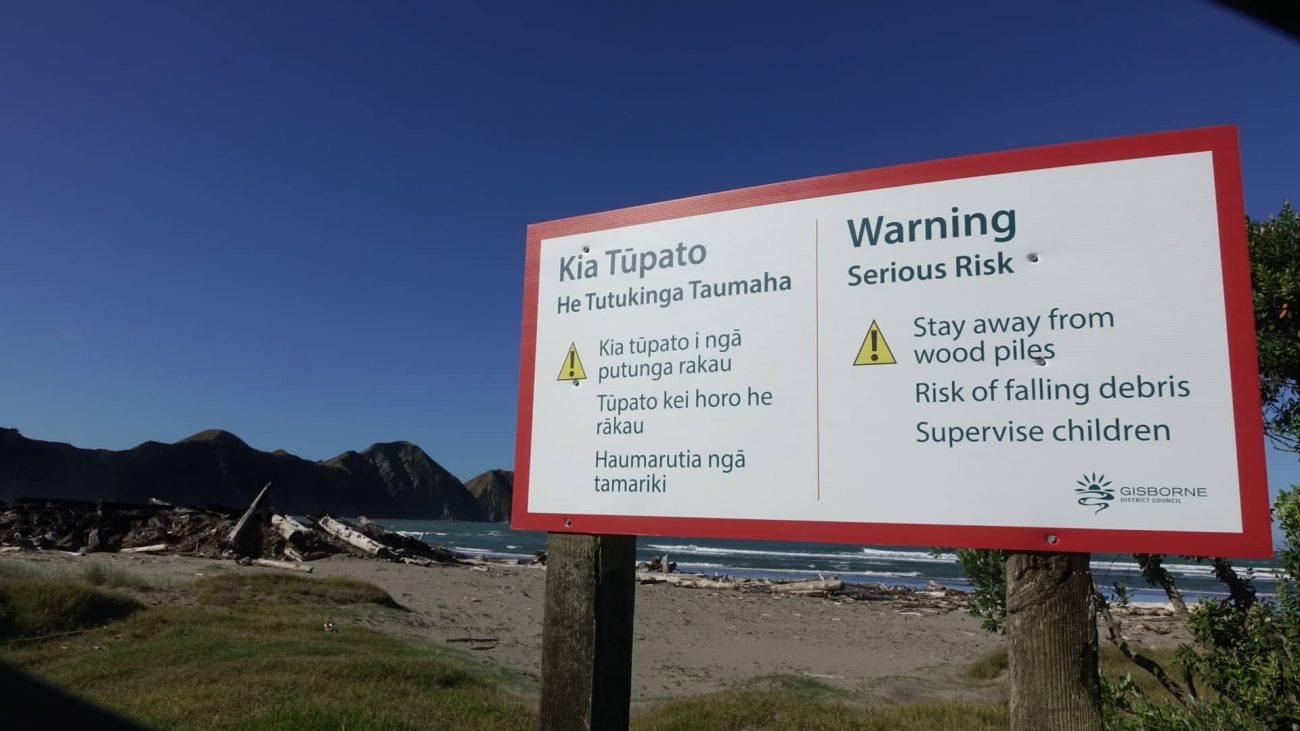 While forestry companies plead not guilty to charges of causing flood-borne debris damage, East Coast residents are still cleaning up the mess eight months after an estimated 1 million tonnes of logs and debris were strewn on properties and roads.

Heavy rain washed piles of logs and debris on to Tolaga Bay roads and farmland during two storms in June 2018. Farmers put the cost of the damage in the millions of dollars.

It is the first time the companies have appeared in court since being charged by the Gisborne District Council with breaching their resource consent conditions.

An estimated one million tonnes of logs and debris was left strewn on properties and roads during two bouts of heavy rainfall in June last year.

Tolaga Bay was the worst hit and three companies that operate there – Hikurangi Forest Farms, Ernslaw One and PF Olsen – were among the ten charged.

Judge Warren Cathcart denied requests from all the companies for more time to be given to consider thousands of pages of evidence from the council relating to the charges, before they entered a plea.

Gisborne District Council lawyer Adam Hopkinson argued the companies were given the documents in February and had plenty of time to consider them, and Judge Cathcart agreed.

Meanwhile, Tolaga Bay locals – who are still cleaning up – fear it will keep happening unless drastic changes to the industry are made.

In June last year, unprecedented heavy rain in the Tolaga catchment washed tonnes of forestry debris from the hills onto the flats.

The slash, as it’s called, created dams, exacerbating the flooding that followed.

Farmer Mike Parker says: “The speed of the water has pushed fences over and gates don’t swing properly, and culverts blown out and silt in drains we’ve had to clean out, tile drains – you have to get a machine into do that – so it’s been a pretty lengthy and an expensive process,” Mr Parker said.

Tolaga Bay beach was supposed to have been cleared by three companies operating in the area by Christmas, but it’s still littered with logs.

Every time it rains more slash is brought downstream – and locals fear what might happen in another big storm event.

Alison Waru from the local iwi is coordinating the beach clean up.

She said a fire ban meant the remaining logs won’t be burnt until August – and that’s if no more wash up.

She said forestry employs a lot of locals and the iwi wants to educate workers and companies, as well as the council, on ways to prevent such damage happening again.

“I don’t want to leave this mess for my mokopuna, so we have to put steps in place now so that 10 years, 15 years down the future they’re not dealing with this thing again, so it’s a real long, long view and that’s what Uawanui is about, is that 100 year look at things. Not just from June to here,” she said.

Shaun Mitchell, who lost everything, including his home, in the June flood, has worked in forestry for 25 years.

He said installing more slash traps in plantations and in rivers upstream could be easily done now to reduce the risk.

“Definitely ain’t going to stop the slash from coming off the hills but try and retain it within their estate. So there might have to be some variations for consents to be able to service the waterways and tracking along them so you can have slash catches, try and catch them in smaller quantities, that’s my opinion. Just using a council bridge to catch them all, because that’s pretty much what the council bridge has become, a giant slash catcher.”

Mr Parker said he was waiting to see what happens with the case before he and other affected farmers considered launching their own legal action against the forestry companies.

The forestry companies will reappear in court in August.

None would talk to RNZ about what measures they were taking to prevent more slash damage, and the Eastland Wood Council who represents them also refused to talk unless a positive story about the industry was told.