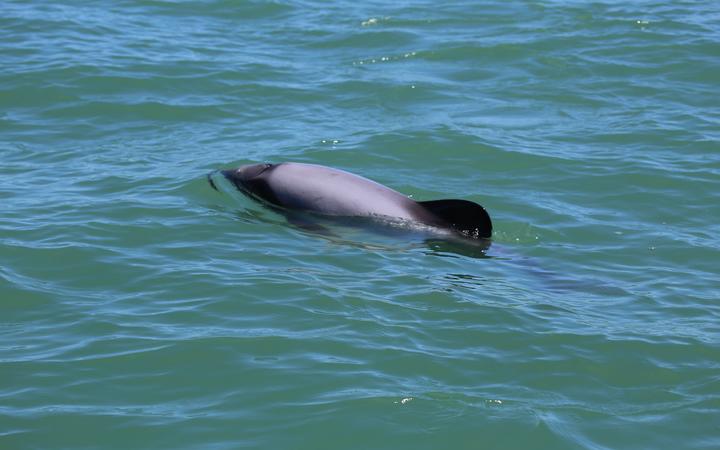 A former fisheries observer is casting doubt on the effectiveness of asking fishers to move on when they see critically endangered Māui dolphins.

The idea has been put to the government by two of the country’s largest fishing companies and the World Wide Fund for Nature (WWF), which says it wants to see people living in harmony with nature.

The move on idea from WWF, Moana New Zealand and Sanford, was seen as an alternative to four options the government was considering to halt the decline of one of the world’s rarest dolphins.

It is estimated there are as few as 57 of them left.

WWF’s Livia Esterhazy said under their plan a drone would detect their presence and alert nearby fishers, who would then leave the area.

“They will ping an alarm to say there are dolphins in this GPS coordinate. Now, given timing, those two commercial fishers have said we will go out and pull those set nets, if there’s enough time. If those dolphins are spotted in a certain direction and we know they’re going towards that area, we will move on.”

While the drones were more than 90 percent accurate in identifying the dolphins, Ms Esterhazy admitted sending a warning to fishers and having them act on it was the part of the plan that still needed to be trialled.

With Māui dolphins on the very edge of extinction, Ms Esterhazy did not think using untested methods was a risky proposition.

She noted that since 2016, the two fishing companies, with help from WWF, had already voluntarily stopped fishing in the same areas as Māui dolphins.

“On top of us, basically advocating for increased protection by fisheries in that space, we want to trial this to add to it, to add to reducing the threat of fisheries in the Māui dolphin habitat.”

Carol Sutherland was employed by Fisheries NZ and the oil industry to spot marine mammals for 18 years, including in the murky waters off the North Island’s west coast, where Māui dolphins were found.

Māui and the closely related Hector’s dolphins were very hard to spot, she said.

“It’s a combination of [there being] no visible blow, [it’s a] small animal, not very active on the surface. With any … choppy sea state, even the vision from a drone could be limited.”

The former observer, said the dolphins could cover a lot of ground very quickly and could be on a fishing boat within minutes.

“How are you going to respond to a sighting? If they are close to a vessel, what is the response and can the net be collapsed or other means, where they are not going to be caught.”

Sanford chief executive, Volker Kuntzsch, said if dolphins were too close and skippers had already deployed their nets, they would be directed to keep them in the water and wait for the dolphins to move on.

“Because usually these animals are active at the surface and the risk of you catching that animal then as you haul your net, is then rather big, so [we would] rather keep it underwater, move away and then pull it up.”

He noted the aerial view afforded by a drone made it much easier to spot dolphins than the view observers had looking out towards the horizon.

Even if the government did not pick up their idea, they would continue trialling the use of drone footage to help protect the dolphins, he said.

“The first thing that people usually come to is, why don’t you stop all fishing? Just stopping all economic activity because we want to protect the environment, that is a little bit over the top. So we are trying to find out how we can ensure that we don’t fish in the area where the Māui dolphin is.”

Moana New Zealand’s Nathan Reid noted that at present there was very little surveying work done by observers over winter because of rough sea conditions, and that meant there was not as much information as they would like on the dolphin’s movements.

“Drone technology now makes this possible, giving us more data which has to be a good thing,” he said.

Fisheries NZ and DOC said advice, based on the submissions received had now been provided to ministers, meaning a final decision on what would be done to protect the dolphins would be made soon.