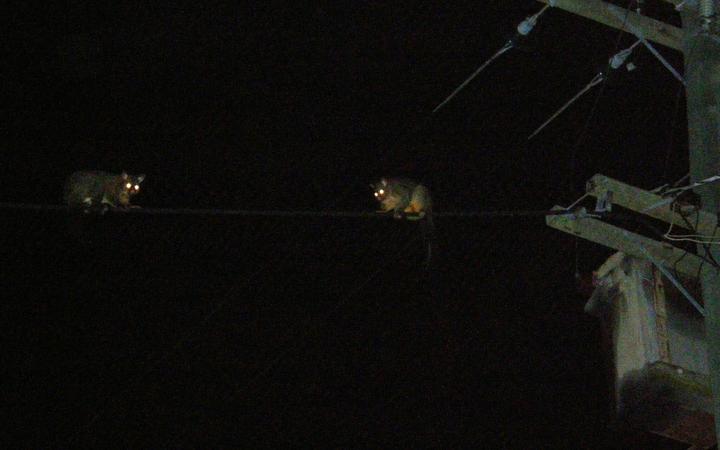 A specialised DOC ranger has been set to work on Canterbury’s Banks Peninsula with a new truck, hunting possums that have learnt how to climb concrete power poles.

Of 54 power outages caused by possums on Orion’s electricity lines last year, about a quarter were in Banks Peninsula.

Possum guards are fitted on the lines company’s wooden power poles, but possums climbing the concrete poles are causing high-voltage electrical arcs and knocking out power to hundreds of homes and businesses.

Orion’s general manager Infrastructure Steve Macdonald said was time to tackle the problem at the source.

“We know the vegetation’s going to increase as climate change takes effect, so we wanted to address the problem rather than keep putting our community at risk with outages,” he said.

Oscar Ashton is the new ranger, and equipped with a new truck he will be focusing on possum control full-time for the next five years.

With sponsorship from Orion, Mr Ashton said his job would include trapping work, using toxin and bait stations and running trapping workshops for the community.

“I’ll be working on planning both pre and post-monitoring, before any control, and I’ll also be planning the control as well,” he said.

“I think for the first three years we’ll be concentrating on the wild side, but dedicated towards eradicating possums across the whole peninsula.”

DOC has already pledged to make Banks Peninsula predator free by 2050, by working with 11 other councils and community groups.

The burgeoning possum population poses a major threat to forest canopies, and the pests are known to feed on native birds, fruits, flowers and buds, even raiding the nests of tui, kereru and piwakawaka (fantails) and titi (muttonbirds).

DOC’s operations manager for the district, Andy Thompson, said having a specialised ranger was a “game changer”.

“Traditionally we’ve been able to dedicate a couple of rangers for a couple of weeks a year, maybe to tackle a reserve or two each year. But that’s nothing like enough to make a real impact on the possum population,” he said.

“This program will allow us to intensify our efforts, because possum numbers are really high, but also expand our efforts significantly.”

“Anybody can purchase any sort of trap or there’s the trap library in a few different locations now. The more people we have trapping, the better,” he said.

If the possum ranger program was successful, Orion said it wasn’t ruling out the idea of rolling it out elsewhere in the country.

Mr Ashton said ‘job done’ for him would be “no more possums on Banks Peninsula”.