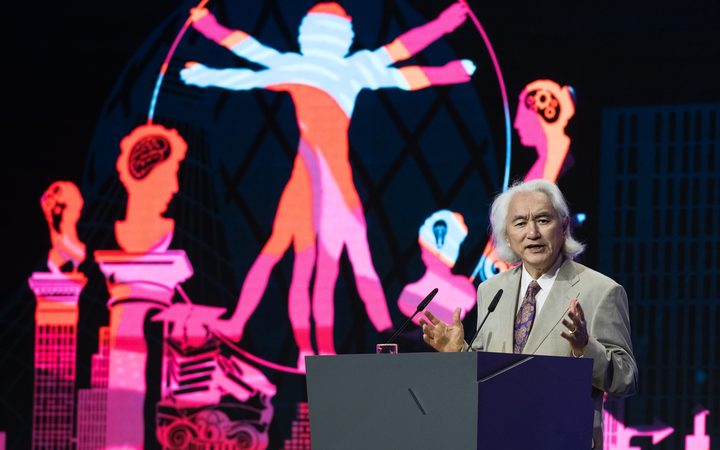 Theoretical physicist Michio Kaku theorises about a possible future in which digital versions of humans are beamed to other planets.

He said the laws of physics clearly showed that humans would one day have to leave the Earth.

“When the sun dies we will go with it, unless of course we leave the Earth.

“So we need an insurance policy… otherwise we too will go the way of the dinosaurs.

“That’s why we should become a multi-planet species,” Dr Kaku said.

The Japanese-American, who is professor of theoretical physics at The City College of New York, will speak about his latest book, The Future of Humanity, in Auckland, Wellington and Christchurch from 31 October.

Those who attend can expect to hear ideas that sound like they come from the far reaches of science fiction.

Dr Kaku, who is the co-founder of string field theory, said Silicon Valley entrepreneurs were exploring ideas of digital immortality.

“It would digitise everything known about the human personality and the body, so that way if you die, your holographic image with all your memories would survive and become immortal.

“Once we do this, we will put all the information of our personality onto a laser beam and shoot the laser beam into outer space.

“In one second… you’re downloaded into a mainframe computer on the Moon, which controls a mechanical avatar.

Physicists and engineers were also laying the ground work for more conventional spaceships to transport people to other planets.

There was plenty of time to find ways to colonise another planet before the Sun started to become a red giant that would destroy the Earth in about four billion years, he said.

However, climate change, the proliferation of nuclear weapons, and germ warfare could make the Earth inhospitable well before the Sun dies.

Dr Kaku said the planetary civilisation phase, in which nations were united and peace mostly reigned, was expected on Earth in 100 to 200 years.

Currently, humans were in a “race against time” to avoid wiping ourselves out before a planetary civilisation emerged.

The Moon or Mars could prove hospitable planets to support human life whenever the Earth became inhospitable, he said.

The US plans to return to the Moon and an expedition to Mars might be possible within the next 15 to 20 years, he said.

“Then we will create a colony, a permanent self-sustaining colony on Mars.

“Then begins the process of terra-forming Mars that is making Mars into a Garden of Eden.

“The way to do that is to have satellites orbit Mars that reflect sunlight down to the polar ice caps, melting the ice caps so liquid water once again flows freely into the oceans and river beds of Mars.”

Trashing this planet and moving onto the next one was not part of his vision, however.

“We’re not saying that you should venture to Mars in order to leave the Earth to become a garbage can and be polluted and have global warming.

“If you are an earthling, it’s your duty to try to save the planet.”

The universe could also cease to exist, if temperatures plunge to zero, Dr Kaku said.

“When the time comes that we’re faced with the death of the universe itself, maybe we should leave the universe.”