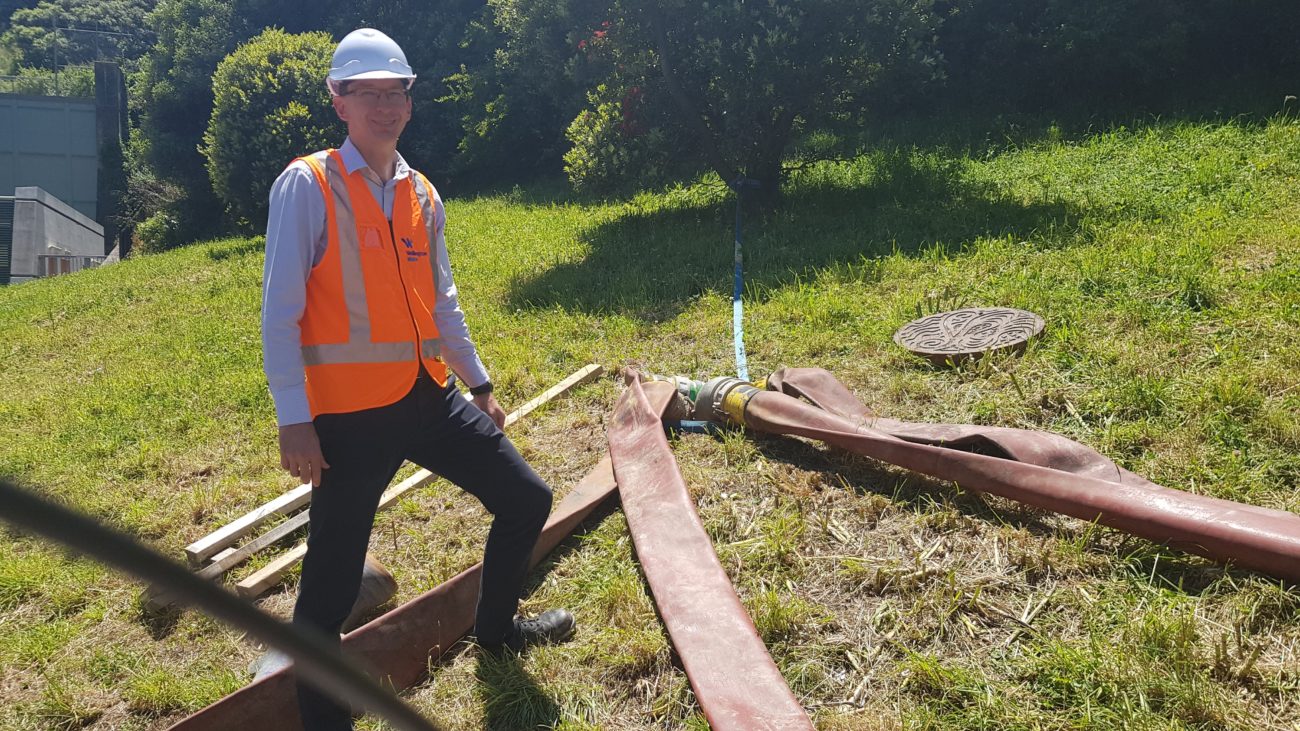 Wellington Water crews are figuring out the best way to divert waste from a collapsed sewer pipe back into the main line, in an effort to stop it overflowing into the harbour.

A pipe that feeds the main tunnel to the Moa Point Waste Water Treatment Plant collapsed overnight on Thursday.

Chief executive Colin Crampton said the plan was to divert waste from the broken pipe near the intersection of Willis and Dixon Streets in the central city to the next pipe that feeds the main tunnel – about 200 metres away near Ghuznee Street.

“There’s two ways to do it – one is to liven up an old 1890s chamber that goes right up through Willis Street or run a pipe up on top of the street. We’re working on both at the same time so we’ve got redundancy in the system.

“Basically whichever one we can liven up the quickest will be the way we’ll do it.”

Crampton said getting the old pipe back up and running would likely be the quicker option, but it was hard to tell at this stage.

“It’s just full of debris, so it’s probably the one that’s most likely that we can open up, but there’s other complications. Lying the pipe across the road might take two or three days.”

He said the temporary solution would need to be tested before full volumes were able to be processed.

“We’ve got to slowly start pumping again down by the harbour without doing it too rushed in case there’s other complications.”

If that worked out, it would be between 48 hours and a week before the health warnings could be lifted.

“We know it’s about a period of 48 hours before it starts to recleanse itself and up to a week sometimes, depending on what the condition is and the amount of flushing in the harbour.”

Usually waste was collected at wells near the waterfront and pumped back up to the main sewer line that goes to Moa Point, via the collapsed pipe.

Since the collapse the pump stations have been turned off, but the waste was still collected there.

Some of it was being taken by truck to the treatment plant, but the overflow has to go into the harbour.

Crampton said not as much waste had gone into the harbour as expected, and it was expected to lessen as people moved away for Christmas.

“We were predicting maybe up to 100 litres a second of wastewater going into the harbour, today we think it’s more like 50. So that’s really good that combination of people using less water and maybe not as many people living in the zone has really helped us.

“We estimate that about an Olympic sized swimming pool of wastewater is going into the harbour every 24 hours.”

He said the discharge was unlikely to be visible.

“The one thing we are worried about is because the pump stations aren’t running, the wastewater that comes out can be full of, you know, uncomfortable things.

“So we’ve got crews down there under the wharf, looking out for that and we’ve also got the ports of Wellington and the Coast Guard helping us to just patrol that inner city area around Frank Kitts Park and Taranaki Street to just make sure nothing unsavoury arrives in the water.”

Crews are working 24-7 with about 30 staff at one time working on the fix, rotating out with another 30 every 12 hours.

Crampton said it was hard to know what caused the collapse of the 1.3 metre high tunnel, but they would also check other parts of the system where similar vulnerabilities could be.

He said fixing the collapsed tunnel would be complex.

“What we were trying to do was dig down to find out what was going on properly and fix it, so we had to go down. We thought we’d stabilised it that night and overnight it ended up collapsing further.

“It’s tricky now because what we don’t want is any of that material washing into the main tunnel, so if we had any trouble there it would make the problem way, way worse.”

He said there was no chance drinking water risked becoming contaminated.

However, Willis St between Vivian and Manners streets and Ghuznee St between The Terrace and Victoria St are closed while work on the pipe continues and significant traffic delays are expected.