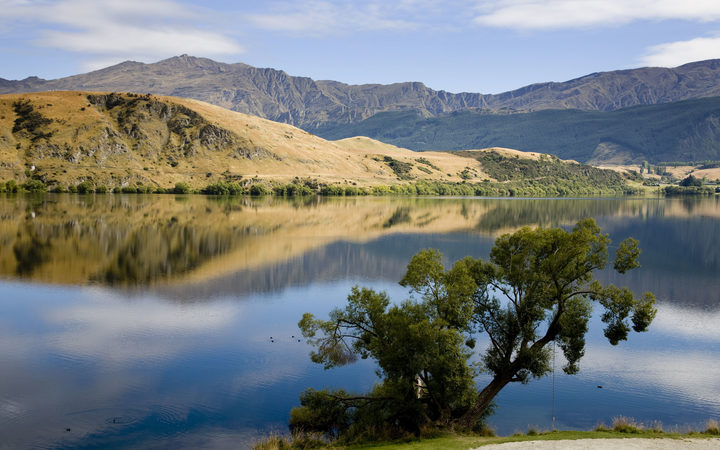 A lifeline is being offered to help restore a popular Otago lake battling algal blooms.

The Otago Regional Council (ORC) has started consulting on possible solutions to improve the water quality and hosting meetings to inform the public.

Friends of Lake Hayes Society secretary Richard Bowman first started visiting Lake Hayes in the 1960s when his family bought a holiday home in the area.

Back then, he said the water quality of the iconic lake wasn’t scrutinised.

“When we were young, we just assumed the water was always clean and pure. We never gave it a second thought. But even back in the late 1960s, there were some algal blooms but they were relatively short lived in the lake and they came and went,” Mr Bowman said.

“It was a wonderful lake for kids to play in, it was safe, it was clean. It had a really good population of brown trout and it was a real playground.”

But the lake has had a problem that is mostly hidden for parts of the year – phosphorus.

“Unfortunately under certain conditions, phosphorus that sort of resides in the mud on the lake floor, certain times of year you get the lake water actually turns over and it brings those nutrients back up to the surface and effectively fertilises the light-rich surface layers, which the algae love,” he said.

A new algal bloom started appearing in about 2006 – and instead of sticking around for weeks, it stayed for months, giving the lake a brown hue and making it unswimmable, Mr Bowman said.

“What we didn’t understand then was actually changing the whole structure of the lake to the point really where it became very poor habitat for the brown trout and there were actually fish deaths at that time.

“Ever since then the trout population has declined to the point where you can still catch a fish but nothing like what we used to.”

Nutrients have built up over several decades of human activity around the lake, and have got to the point where it can be unsafe for recreational use.

The water quality of the lake has two main problems – issues with the new water flowing in and the historic issue of phosphorus building up in the lake bed over decades.

The first issue is being addressed by a catchment study currently underway.

And the ORC has started consulting on ways to restore the health of Lakes Hayes by addressing the historic phosphorus problem.

The potential phosphorus solutions include mixing the water with compressed air so conditions aren’t suitable for phosphorus to become a food source for the algae, adding water from another source to flush the lake out, withdrawing the phosphorus rich water through a pipe, and adding a chemical to prevent phosphorus from being released.

There is also an option to stick with the status quo and continue monitoring the lake, which includes a newly installed monitoring buoy.

ORC natural hazards analyst Ben Mackey said the council was entering new territory as there was not a lot of international precedent for trying to restore an alpine lake of such a size.

The proposed changes could cost from $300,000 to a $1 million and the potential solutions all had pluses and minuses.

“Some of them could induce quite significant changes to the lake or have secondary effects such as noise or visual effects. Really we’ve tried to identify four practical ways to address this issue of phosphorus in the lake bed sediments and now taking it out to consultation to see the public appetite for any or all of them,” he said.

“If there’s a chance that it can be solved then the investment is going to be worth it for sure. This is a big public asset, it’s right in the eye of tourists and it used to be once a very popular fishery so it will be worth it,” Mr Hadland said.

“These are pretty drastic measures to have to take on quite a big lake.”

He was looking forward to discussing how a successful option may be implemented.

Public consultation is underway and public meetings will be held next week and next month to get the community up to speed on the different options.

Mr Mackey said it might be a couple of years before a final decision was made and restoration work got under way.