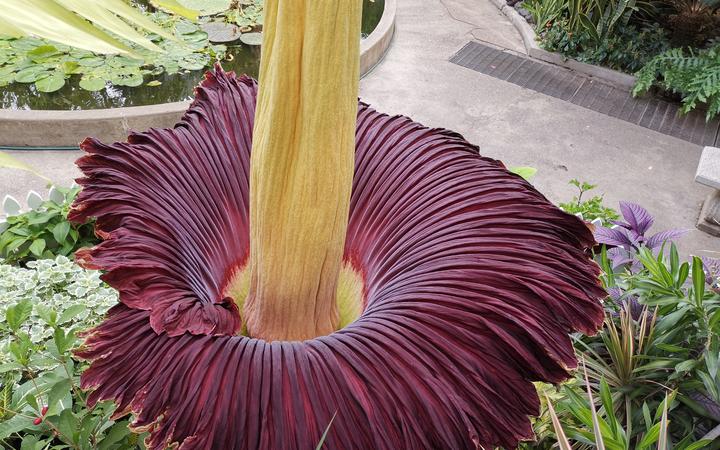 Christmas has come late for Dunedin Botanic Gardens, as a tall, slender beauty is priming itself to bloom again, years ahead of schedule.

The corpse flower at the gardens, which emits an odour so rancid it’s been compared to a rotting corpse, is showing signs of bloom.

Keenly waiting the smell is winter garden plant collection curator, Stephen Bishop, who is delighted to have the rare bloom back just three years after plant last happened.

“We’ve had this plant since 2008 and it first bloomed for us in 2018 and then to have it flower three years later I was really surprised,” he told Morning Report. “Apparently it can take another seven or eight years to flower sometimes, so we’re feeling very lucky.”

Thousands came to the gardens to seem it bloom in 2018, with queues stretching through several gardens within the grounds and out across the street, he said.

“It was incredible. I’ve never seen anything like it. We estimated about 10,000.”

It is hoped similar crowds turn out again. The flower was showing a few signs of blooming yesterday afternoon, with a faint smell becoming noticeable and the top of the flower heating up – another tell-tale sign the flower was poised to burst out, Bishop said.

“It gets up to about 37 or 38C, but unfortunately this morning it’s actually cooled down again, so not quiet sure what’s going on there, but it is very close to flowering.”

His guess was it would bloom later on today or tomorrow.

“It’s reasonably stinky and a lot of people seem to react to it quite differently. A lot of people find the dour really offensive, others don’t find it that bad.”

The odour changes, and the purpose of the smell is to attract pollinating beetle. The bloom lasts 36-to 48 hours at the most, Bishop added.