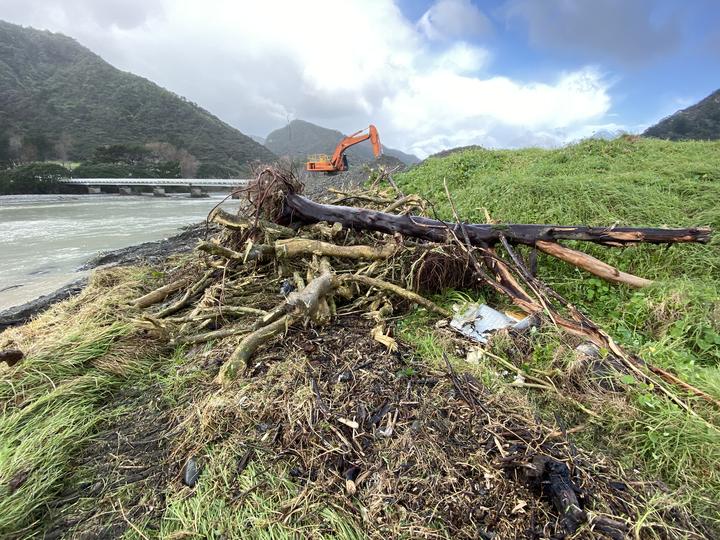 A landfill breach that has left an East Coast beach littered with junk and a community reeling is another wake-up call over the dangers posed by long-forgotten dumps.

Ripeka Irwin’s eldest son was just a toddler when the family moved to Australia.

He never got the chance to join the kids who spend their summers diving off the bridge at Te Araroa and dodging the cars of tourists heading to the lighthouse at East Cape that greets the world’s first sunrise each day.

Last year, though, the now 10-year-old and his 9-year-old brother finally got their turn to jump into the crisp Awatere River.

Irwin’s four-year-old son was eager but too young to join his elder brothers, but Mum doesn’t know whether her boys will be able to enjoy the swimming spot again this year.

“It’s gross when you think about it now, but it is a beautiful river in summer,” Irwin said on Wednesday, day three of a clean-up operation she instigated, alongside Tina Ngata, after rubbish started leaking out of an old dump beside their beloved awa.

She has been keeping an eye on the old riverside landfill and flagging her concerns with the council since returning home last October.

On Monday, she woke to the scenario locals had feared.

After weeks of rain, Sunday’s full moon brought a surging tide that ate into land beside the Awatere River mouth, exposing layers of rubbish and dragging them out to sea, in scenes reminiscent of last year’s Fox River landfill disaster.

It was devastating, Irwin said. Not just because of the rubbish but because locals have been calling on the council to do something about the old landfill for years.

They could see that despite it being closed, the dump was a risk to the environment – their environment – once a training ground for warriors under the tutelage of Tuwhakairiora, according to legend, and forever a food source.

Before she will let her boys back in the water, Irwin wants the council to test the river to check the old tip is not leaching toxic substances.

The district council’s community lifelines director, Dave Wilson, said like other contaminated sites in the region, Te Araroa’s former landfill was monitored to ensure it wasn’t posing a risk to the environment or public health.

He said the council’s monitoring up until Monday’s breach indicated the dump site was stable.

But Wilson does not shy away from the fact that everything that could be wrong about a landfill is wrong at Te Araroa’s old beachfront tip. It’s unlined and does not have a cap.

“It’s one of those dumps from back in the day when that’s just what happened,” Wilson said.

The Gisborne district has more than 10 former public dumps, some more than 100 years old and showing no signs of becoming less hazardous, Wilson said.

However, the council was confident it had identified all contaminated sites and put controls in place, he said.

The difference with the old Te Araroa tip was that “nature did what nature does and made it an immediate risk for us”.

The Awatere’s gravel riverbed moves continuously, but Wilson said he had never seen it cut in so close to the old dump before.

The council is spending up to $300,000 on a fix that Wilson said would keep the river from undermining the old dump for the foreseeable future.

The 70m eroded riverbank has been covered with gravel taken from further upstream, stopping more rubbish from escaping, and a wall of boulders will be placed in front of it.

The council also plans to encase the 2500sqm former dump in erosion-protecting fabric.

The whole process should take no more than three weeks and be followed by a conversation with the community about a long-term solution, with all options on the table, Wilson said.

Taking a break from the clean-up at Te Araroa Kai Kart, Michelle Wanoa said she wanted assurances the river was not being contaminated.

“It’s a food source and if we don’t correct these environmental issues, the life force that is the river becomes affected.”

Wilson said regular water tests at the site could be considered as part of a more permanent fix.

Many locals are calling for the old dump to be completely excavated and for its rubbish to be shipped away, but that could cost tens of millions of dollars.

Wilson said the council may be able to seek financial support from the Ministry for the Environment, which has a contestable fund for projects to sort out contaminated sites.

One of the reasons he is reluctant to judge his council predecessors for allowing dumps to be established near waterways is because of the modern world’s very different waste problems.

“One hundred years ago you didn’t have, arguably, the chemicals or the volumes of chemicals we’re putting into the ground now and plastics weren’t invented.”

In Irwin’s haul of waste on Wednesday, old biscuit packets and toothpaste tubes looked almost untouched, even though they had been in the ground since at least 1999, when the Te Araroa dump was closed.

With other concerned locals, Irwin collected five ute-loads of rubbish over two-and-a-half days, unable to sleep at the thought of how much junk was being picked up by the sea overnight.

The council also sent clean-up crews to the site and on Thursday both locals and contractors were collecting rubbish along the several kilometres of coastline at Te Araroa.

On Friday, they were tackling the next bay over, Wharekahika/Hicks Bay, with reports of rubbish washing up there.

Gisborne District Council inherited the old Te Araroa dump from Waiapu County Council when the organisations were amalgamated in the late 1980s.

Hal Hovell, a retired Department of Conservation ranger who has lived his 68 years in Te Araroa, remembers the dump being set up at the river mouth about 1970, when there were few restrictions on what could be left there, with agricultural chemicals, asbestos and offal among the cast-offs he saw heading to the tip.

At that time, the foreshore was at least 100m wide, but over time the sea had crept closer to the settlement, Hovell said.

The disaster prompted a government-led review of vulnerable dump sites across the country in the hope of developing a national risk screening and assessment tool.

“I think Fox River started the conversation and this (Te Araroa landfill breach) has just refined it for us here in Gisborne,” Wilson said.

“Climate change is real, sea-level rise is real. These issues are going to get worse in time, so how we respond to them as a community is a big thing for us.”