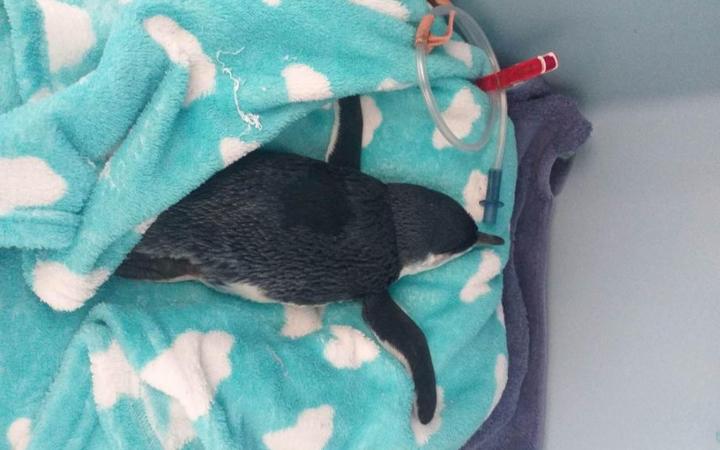 A bird rescue group is worried that a mass die-off of Little Blue Penguins that has happened before could reoccur this summer.

The Bird Rescue Charitable Trust said it had been getting reports of dead penguins on beaches around Northland and north Auckland, and it could be connected to the current La Nina weather pattern.

Within the past week the trust has been unable to save five emaciated penguins brought in by members of the public from Orewa and Milford. General manager Dr Lynn Miller said they were in a bad way.

“They are really so emaciated. These birds are coming in well under 500 grams and it seems that in Blue Penguins for adults, anything under 400-500 grams and certainly getting down under 400 grams is pretty much a death sentence for them.”

Miller said the trust was given a heads up by NIWA that the country was going into a La Niña weather pattern which brings warmer than average air and sea temperatures particularly around the North Island.

That means the fish seabirds feed on stay in deeper, colder water and the birds can starve, but Miller didn’t expect the effect of La Niña could happen so early and so rapidly.

“That means that the young penguins that apparently are fledging through this early period because the breeding season was early plus the adult are all going to be in terrible trouble.”

Miller is worried that an age class – meaning penguins born in a certain year – is going to be wiped out, leaving a gap in the population.

She said emaciated birds were very vulnerable but people could help to pull them back.

“Whatever people do, do not offer food. Don’t try to offer anything except for a quiet, warm, dark space while they transport them to care,” she said.

Science advisor at the Department of Conservation, Graeme Taylor, said in the last week emaciated and dying little blue penguins have been found on Somes Island in Wellington Harbour. too.

“A lot of the birds have just started to die in the nest and look like they’ve probably been abandoned with under weight checks and not having adults coming in to feed them,” he said.

Apart from the warmer water having an impact, heavy rainfall bringing more fresh water, could also affect the availability of food to seabirds, especially the flightless penguins, Taylor said.

He was not certain that mass dying was going to happen, but said it was worth keeping an eye on.

“It’s very early in the season and often these events don’t really start showing up ’til about January when you start getting a lot of birds coming in. We’re still in November so it’s still quite early days, so it will definitely be worth monitoring quite closely and getting reports from the public. ”

Taylor said a mass die-off of hundreds and even thousands of penguins was a once in a decade event now. Just two years ago lots of Little Blue Penguins washed up dead on beaches in the upper North Island.

Miller said the fact it was happening more frequent was worrying, adding it’s a sign of a changing world and the need for action

“We have a very big problem to face as a world… slowing down the rate of forest destruction, stopping the fires, stopping the abuse of our planet.”

Bird Rescue is now working on guidelines to tell vets and clinics how to handle emaciated penguins and other seabirds.