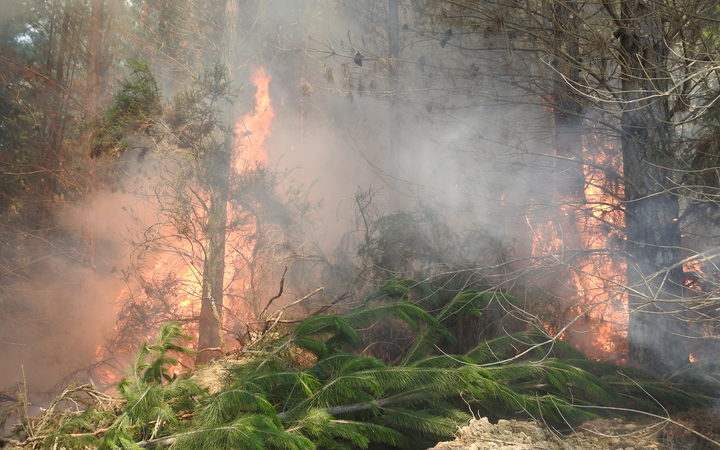 Parts of the country with low or moderate fire risk are likely to see dramatic increases in danger as climate change occurs.

Fire fighters are currently battling a 2000 hectare blaze near Nelson, and the conditions they are facing – hot, windy days and a long dry spell – are likely to be more common with climate change.

Research in 2011 looked at 21 weather stations across the country and what the projected change in conditions – temperature, humidity, windspeed, and rainfall – would mean for fire danger.

It said drier conditions expected with climate change were “likely to result in significantly greater risk of large and damaging wildfires that threaten life and property, and economic and environmental sustainability. Longer fire seasons, increasing population and associated demographic impacts, changing land use and changes in vegetation cover are expected to exacerbate these risks.”

It compared fire risk under the average current climate to expected risk in the 2040s and 2090s.

“The key finding was that fire dangers in a number of different parts of the country were likely to increase in the future,” Mr Pearce said.

Areas that already had severe fire risk – Marlborough, Canterbury and the North Island’s East Coast – were only expect to change slightly.

“What was quite surprising is that some of the areas that currently wouldn’t currently be perceived as high fire risk will see quite dramatic increases in the future.

Whanganui was also expected to see a dramatic increase.

“They’re going to see a doubling or even trebling of days of bad fire weather. For an area that might only [have] five to 10 days on average of really bad fire weather might go to 10 to 20 days – that’s obviously a really significant change.

“In terms of weather, we may see days getting more severe in the future with higher temperatures and potentially more days with stronger westerly winds. Combine that with decreased rainfall in some areas … that’s affecting the change in dryness.

“As well as more severe days within the fire season, what we’re also expecting with climate change is for fire seasons to get longer.”

New Zealand’s fire season had previously been considered to be October to April at its longest, but Mr Pearce said it was expected to start earlier and extend longer with climate change.

“The big thing, particularly for fire authorities, is the year-to-year variability so a really bad fire season like we’re seeing in some parts of the country really gives them exposure to what could potentially happen more often in the future.

“It’s just being aware that it’s likely to happen as much as anything.

“If we are going to see more fires and they are going to be larger and potentially more damaging I guess [FENZ] are looking at whether their current levels of resourcing are adequate. That’s particularly where they are interested.

At the start of the 2017-2018 summer, FENZ national manager of rural operations John Rasmussen said with the increase of extreme weather associated with climate change, vegetation fires needed to be given a higher priority on that list of disasters New Zealand needed to prepare for.

“For fire fighters, climate change means essentially more extremes with more floods and more droughts, or, more simply, the wet will be wet and the dry, drier.

“What many people don’t realise is warm, wet winters also add to the fire risk. The rain means increased vegetation growth, which when it dries out higher fuel loading. More fuel means greater risk of fires, higher fire intensity and more difficulty in controlling fires when they do break out.”

Mr Pearce said there was an increasing global approach to wildfire management.

“[That’s a] recognition that the scale of the events we are seeing is beyond the capability of any one organisation.

“There’s much more focus on resource sharing. We’re seeing that currently with the Tasmanian fires, where there are fire crews being brought in and aircraft being brought in from other parts of Australia, there’s New Zealand fire fighters go over there.”

There had also been exchanges where New Zealand fire fighters headed to Canada and the United states.

“That’s probably the one new area – it had always been us sending fire fighters elsewhere but there’s an increasing awareness that we are going to need help ourselves in the future.”

Resource sharing could see large air tankers from North America being brought Australia and possibly be available to New Zealand, he said.

But there was a catch.

“It could mean that we end up with major fires in both parts of the world at the same time.”

That could cause issues in terms of availability of people and equipment, Mr Pearce said.

“In some cases forestry companies have planted really low flammability species around the edge of the forest.

“You can plan those fire breaks with things like lucerne, which is a really low flammability species and it has a really high moisture content in the green material so it doesn’t burn very well and it helps as a bit of a fire break to stop or slow the fire’s spread.

In forestry, highly flammable species of trees like eucalyptus could be avoided.

But the trend world wide was for fires to impact more on people and property, he said.

Homeowners could take steps to reduce fire risk on their property by creating defensible spaces, which involves creating a barrier between vegetation and houses.

“Even just using well irrigated and green lawns, how you place your driveway relative to your house, as well as what the house is built of and where it is located make a really big different as to whether it will be impacted by a fire,” Mr Pearce said.