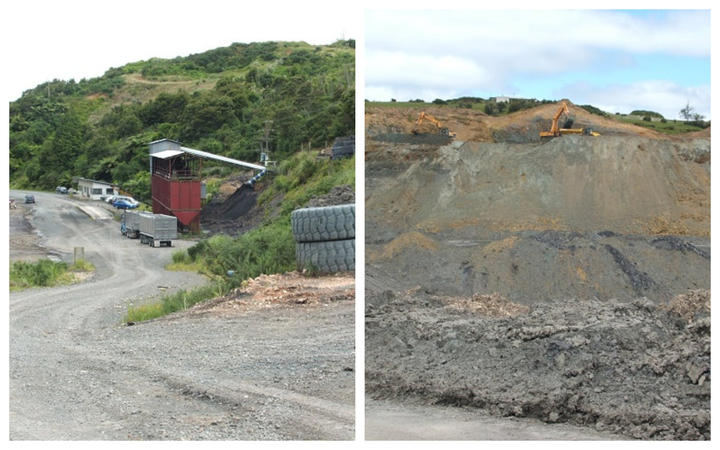 The owner of a Waikato rubbish dump that has been on fire for months has been ordered to put a dirt cap on it.

A fire burning underground since August at Puke Coal Landfill, west of Huntly, is defying the attempts of a high-powered local and central government team to put it out.

The Waikato Regional Council wants a half a metre deep cap of dirt or clay put on the fire within a fortnight.

It has also ordered the landfill owner to get rid of any bulk plastic.

Another abatement notice has been issued to a trucking company to stop dumping prohibited waste at the site.

Landfill owner John Campbell has not complied with some abatement notices, the regional council said.

He has not responded to RNZ’s requests for comment.

Two abatement notices issued on 4 November “direct the landowner to remove all bulk plastic material and other prohibited waste from the property within the next couple of weeks”, the council said.

“Once done, the landowner is then required to cap the fire with 500mm of clean dirt or clay.”

Fire and Emergency said at a meeting with the multi-agency team this week that it was not certain how to put the fire out, according to locals who attended.

FENZ has referred RNZ’s queries to the regional council that leads the multi-agency team.

The team is briefing the offices of the Ministers for the Environment and local government on the fire.

The council has also told Campbell to immediately “turn away any load which does not comply with the landfill’s consent conditions”.

This would be monitored and non-compliance would form part of an ongoing investigation, it said.

“Non-compliance with an abatement notice creates an offence under the RMA that can potentially provide penalties under the Act.”

The trucking company was told in mid-October to cease stop disposing of any waste prohibited under the resource consent, which is held by Puke Coal.

The regional council declined to identify the company.

Water testing has not found any abnormalities that could be linked to the fire.

The Waikato District Council aims to do more testing over the next week.

The regional council is doing air testing. “There were no exceedances of the World Health Organisation guidelines over the month that testing was carried out for fine particulate matters,” it said.

Further air testing will expand the contaminant it checks for, it added.