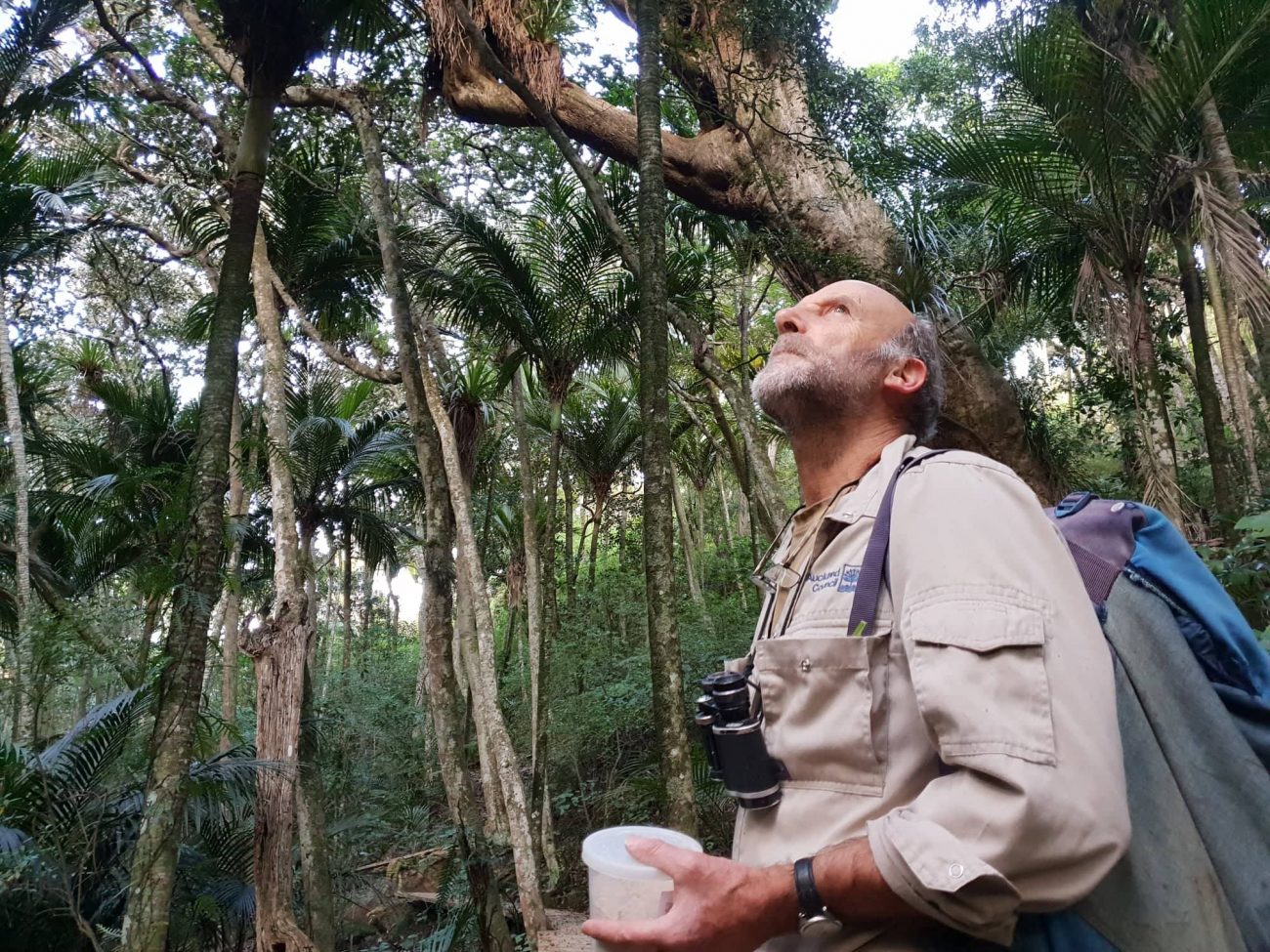 Tim Lovegrove could give Morning Report’s birds a run for their money after a lifetime speaking to many of our native species.

The Auckland Council fauna advisor is being celebrated as an environmental hero by the council for his work trying to preserve the region’s bird life.

During a two-hour walk along the Tawharanui ecology trail, Dr Lovegrove could scarcely move 10 metres without stopping in his tracks and gazing excitedly up at the canopy.

Every tōtara is a neighbourhood block and each line of mānuka a community, with residents who chatter in strange languages and live by the delicately-balanced laws of the tea tree.

Dr Lovegrove knows the lingo and respects the rules. He purses his lips to let out a few high-pitched squeaks and sure enough, a gangly-legged North Island robin flits down to investigate.

“Classic courtship feeding song,” he says of the bird’s tune. “They’ll get up onto a perch and sing strongly with food in their bill like that.”

Dr Lovegrove takes a punnet of live mealworms from his backpack and tosses a few to the little bird.

The way this male is stashing the worms in his beak rather than eating them tells Dr Lovegrove he’s saving the food for his partner, who he now strongly suspects is incubating a nest nearby.

Right on cue she joins him and flies the worms up a hill, where she’s lost in a dense thicket.

With schoolboy enthusiasm, Dr Lovegrove flings himself into the bush and up the steep, muddy slope in search of the nest, stopping every few metres to ask the avian couple to kindly reveal themselves.

“When you’ve found lots of nests you sort of instinctively know where to look and have a better chance of stumbling on it,” he says, before dashing off into the bush again.

He doesn’t find the nest today, but he’s narrowed down the area to about five metres of punga undergrowth and he’ll surely track it down tomorrow.

Dr Lovegrove started talking to birds in the bush around his childhood home in Northland; discovering he was able to call kererū and eastern rosella parrots to his deck.

“Rosellas would come down and they’d chatter at you, and the flocks would gather around. It was quite fun,” he says.

It’s not only bird species Dr Lovegrove is able to identify, he can tell where some birds are from through their unique dialects.

He says there are vast areas of New Zealand where not enough is being done to protect our native birds, particularly when it comes to pest control.

But sanctuaries like Tāwharanui give him cause for optimism about their future.