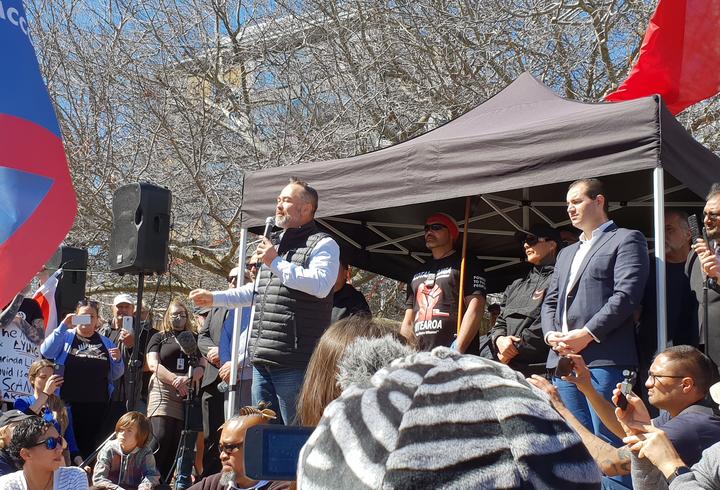 The conspiracy theories espoused by Billy Te Kahika Junior are many, varied, and well-documented.

He’s claimed the government was authorising military to enter people’s homes, and is planning to implement forced vaccinations.

He parrots misinformation about the effects of fluoridation and 5G.

Many of Te Kahika’s views have been discredited by fact-checkers.

So why platform him yet again, as the Stuff Circuit investigative team did yesterday with the release of its False Profit documentary?

On today’s episode of The Detail, Emile Donovan sits down with reporter Paula Penfold to talk about the team’s investigation into one of the nation’s most polarising political figures unearthed, and what they hope to achieve by highlighting more inconsistencies in the narrative Te Kahika has constructed around himself.

The Stuff Circuit investigation revealed new information about Te Kahika in five main areas: his claims around his army record and time at police college; his business practices; his parroting of anti-semitic conspiracies; and his behaviour around women.

But with Advance NZ languishing on one percent in the polls, isn’t a 47-minute documentary like this just giving Te Kahika’s profile oxygen his numbers don’t justify?

“I think why it matters is because … his influence is not directly political. He has had nearly four million video views over the past two months. People are watching, hearing, listening to his messages, and some of those messages are wrong,” says Penfold.

“When somebody has that much traction, we think it’s a useful investment of our time to have a look at the messenger, as opposed to the messages.”

Stuff Circuit’s treatment of these revelations around Te Kahika is forensic and factual: in a sit-down interview Penfold puts a series of facts to him, and he grows more uncomfortable as the interview goes on, eventually storming out.

But none of the revelations are as explosive as the conspiracy theories Te Kahika himself espouses in his many videos on social media.

So is this really proportional? Te Kahika has claimed Covid-19 is an international hoax perpetuated by governments; who really cares if he embellished his military record?

“I think it’s an old-fashioned way to look at it, to treat it purely politically,” Penfold says.

“While he might not register in the polls … he has an audience. He’s influencing people. They’re spending money on his party, taking actions based on what he says.

“There’s another element to it. People who know him speak of politics not being his ‘end-game’. He wants an influence that’s wider and longer than politics.”

“One woman who worked closely with him speaks of his idea of buying a lot of land and building a fortress. Setting up a place where people can come and be with him.

“People who know him don’t think it’s about a seat in the Beehive. They think he wants to have his own following in whatever sphere.”