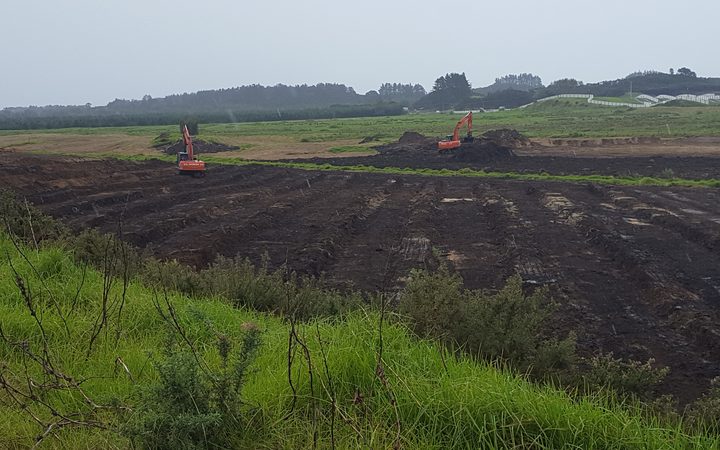 Community groups in the Far North are accusing the Northland Regional Council of bending over backwards to help avocado growers who’ve been unlawfully taking water for irrigation.

The five growers are among a larger group who’ve applied to pump two million cubic metres a year from the Aupouri aquifer.

17 companies and individuals including one iwi, Ngāi Takoto, have applied for resource consent to irrigate 600 hectares of new avocado orchards on the Aupouri peninsula.

Karen Nikora Kerr from the group ‘We Are Water’, says the scale and pace of the work is mind-boggling.

At Motutangi last week she watched as six diggers and a bulldozer worked on creating an avocado orchard on a large tract of land overlooked by an old Māori pā site and DOC reserve.

“We’re just trying to make people aware of what’s happening, and how fast. You couldn’t see all this a month ago, they’ve moved mountains out the back, it’s huge. They’ve only just started on this about ten days ago,” she said.

Ms Nikora-Kerr’s concern is the industrial scale development will jeopardise water security for communities on the peninsula who depend on the Aupouri aquifer.

Private bores, many of which are not registered, provide water to home and bach owners in small towns like Houhora and Pukenui.

There are no rivers on the long sandy peninsula which stretches all the way to Cape Reinga.

And the only way the aquifer is replenished, or recharged, is by rain.

Fiona Furrell, President of the Northland Environmental Protection Society is also a local bach owner, and as such is one of the smallish group of bore-owners who can make submissions on the partially-notified water consents.

She planned to make the most of it.

“We’re only a few hundred metres from an internationally-acclaimed scientific wetland,” she said from the vantage point of the pā site.

“And we are looking at extensive earthworks for a huge avocado orchard on what is actually an archaelogical site, one of the earliest habitation sites, and it’s full of middens and hāngi stones and even bones, but it has not been formally studied. And now it never will be.”

Ms Furrell is also incensed at the growers’ request for large amounts of water, which she and others suspected will prove unsustainable.

The consent hearing, before independent commissioners, is not till next week.

But Ms Furrell said the growers seem very confident they’ll get their water: they’ve been planting their trees all summer, she said, and watering them.

In the dry spell before Christmas the Regional Council, acting on a complaint, discovered five growers were each taking about ten times the volume of water that can be taken from a private bore, without resource consent.

Colin Dall, the council’s regulatory manager said it appeared the growers were each drawing about 200 cubic metres a day to irrigate their young trees.

The council’s response to that discovery, after seeking legal advice from a Canterbury lawyer experienced in irrigation consents, was to offer the growers the option of asking for interim resource consents, to legalise their unlawful water takes.

Three applied and gained consent. Two did not and were served with abatement notices.

Mr Dall said the pair were saved by the rain that arrived in January, allowing them to do without bore water.

The council’s pragmatic approach has angered many locals who are worried the industrial scale avocado plantations will ruin the Aupouri aquifer.

“It looks like the businesses involved were like, ‘if we run out of water we’ll just go to the council and they’ll give it to us because we are so powerful’,” she said.

Mr Dall said interim resource consents are unusual but he rejected any suggestion that the council’s a pushover.

“I don’t accept that – the council acted promptly … it’s taken enforcement action and the people involved had an opportunity to make their takes lawful with interim resource consents.”

There is disquiet on the peninsula that only existing bore-owners within a certain radius of the massive avocado plantations, can make submissions on their proposed water take.

Some believe there are significant errors in the council’s hydrology report on the Aupouri aquifer.

An Awanui farmer Kevin Matthews, said the aquifer is vital to the entire peninsula, but it’s not been well-studied and there are signs that it’s more fragile than the council wants to believe.

He said drillers sinking a bore at Kaimuamau in January struck salt water at 33 metres, for the first time.

“We’ve seen it overseas, they’ve thought they had the right information but in places like Australia and California … where they’re some distance in from the coast, they’ve drawn salt water,” he said.

“We need to be looking at the sustainability of our communities and our farming operations before we stuff it up.”

The resource consent hearing for the 17 avocado growers begins before commissioners next Monday in Kaitaia.