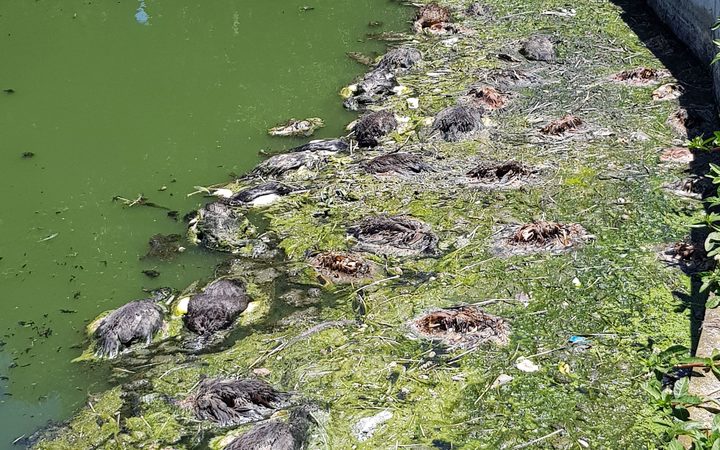 It’s a grim sight – the rotting, bedraggled carcasses of water fowl, piled up at the edge of a sewage pond.

For the past few weeks, mallards, grey ducks, geese, swans and herons have been dying at the Kaitaia oxidation ponds.

The cause is avian botulism, a bacterial disease that tends to erupt in hot weather, according to Fish and Game’s Northland manager Rudi Hoetjes.

“It’s generally in an oxidation pond, a highly-enriched water source, where it takes off from,” he said.

“Birds go there, in the heat of the day to drink and roost and pick up invertebrates; they ingest the bacterium and they get sick.”

Avian botulism was not uncommon in New Zealand but often went unnoticed or unreported by councils, Mr Hoetjes said.

The disease did not infect humans, but the birds were literally sitting ducks, because at this time of year they moult and become flightless for a period while their new feathers grow in, he said.

“They come to areas like this where there’s open weather, they become flightless for about three weeks and they’re stuck there – they can’t go anywhere else. ”

The results in Kaitaia this summer have been catastrophic.

Workers have picked up and buried about 600 birds, including paradise shelduck, native herons and pied stilts.

“These 600 are the birds we’re actually seeing in the ponds.

“There’ll be other birds … more common ones like sparrows that are coming down because we’re in a drought, ingesting the water and some of the invertebrates that are there as well, flying away and probably dying away from the ponds,” he said.

According to the Far North District Council, which owns the Kaitaia oxidation ponds, avian botulism is a paralytic disease caused when toxins are released by bacteria commonly found in lake and pond beds.

Outbreaks of the disease were a natural occurrence and could not be prevented, the council said in a statement.

But Mr Hoetjes said that was not strictly true, because the council built the ponds and created an ideal breeding ground for the disease.

It should be using bird-scaring devices known as gas guns to keep the birds away, especially before the summer moult, he said.

“Once they’ve settled in for the moult it’s too late. There will be a cost to ratepayers, but there’s also an obligation under the Wildlife Act. These birds are protected and it’s an offence to kill wildlife,” he said.

But the council said it would not be using gas-guns to scare the birds away, based on expert advice to other councils.

The birds quickly became accustomed to the guns and ignored them, a council spokesman said.

In the meantime, council crews were burying the bodies and working on an Avian Botulism Management Plan.

But long-term it said the answer might be developing or restoring other more attractive habitats for waterfowl in the area.

Mr Hoetjes said many birds used to spend January at nearby dune lakes but these had been fenced off in recent years to keep stock out, and protect water quality.

The downside was that long kikuyu grass had since grown up between the lakes and the fences, making the verges unattractive for many waterfowl, and it appeared that had driven them to favour the oxidation ponds.