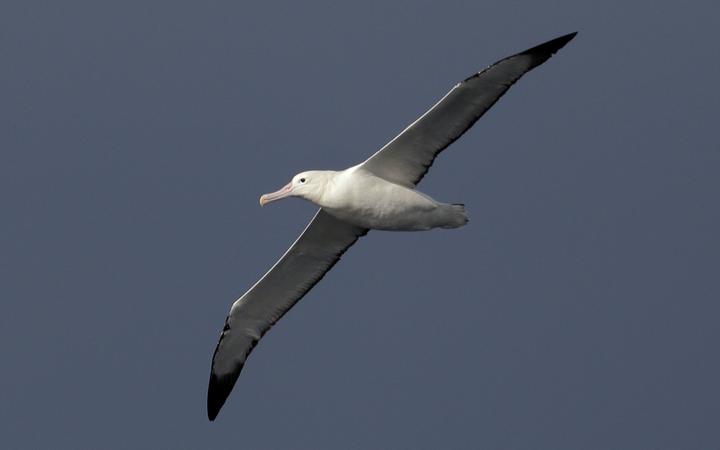 A stomach full of plastic – including a whole plastic bottle – is a likely cause of death to a juvenile toroa/southern royal albatross, an autopsy has found.

The Department of Conservation (DOC) said the bird was found in an emaciated condition by members of the public at Whirinaki Beach just north of Napier. They’re not known to frequent the area and are rarely found near land – an indicator the bird was sick, DOC said.

It was taken to Wildlife Base in Palmerston North and despite close attention and care it died two days later.

An autopsy by Massey University found the flattened 500 ml plastic bottle in its stomach as well as fragments of a balloon. Last year, a study found ingested balloons were 30 times more likely to kill seabirds than hard plastic.

The results suggested starvation was a likely cause of death with the plastic items obstructing the stomach and likely causing pain.

Given toroa can live for around 40 years, the young bird’s death was “tragic and premature”, DOC said.

According to DOC, 90 percent of all seabirds have eaten plastic, and it’s a major threat.

Plastic can’t be digested and sits in the stomach, sometimes leading to death by dehydration or starvation.

It’s not the first case of a toroa in New Zealand being affected by plastic, according to DOC Hawke’s Bay senior community ranger Chris Wootton.

“Fragments of plastic have been found in the regurgitation of fledging northern royal albatross chicks at the colony at Pukekura/Tairoa Head in Dunedin,” he said.

And Sharyn Broni the DOC ranger based at Pukekura/Taiaroa Head, said: “In the 2018/19 breeding season, we collected the regurgitations of northern royal albatross chicks and plastic fragments were found in 14 of the 16 regurgitations. This plastic has been consumed at sea by the parents and then fed to the chicks in the colony at Pukekura/Taiaroa Head and included items like branded bottle lids and infant formula scoops…

“Albatrosses and other seabirds can be tricked into eating plastic. Sometimes it can look like food, and the algae that grows on it in the ocean can also make it smell like food is near.”

The body of the toroa – a taonga species – will be returned to Ngāti Tangoio, the local iwi near Whirinaki.

Other birds have been found dead with plastic in their stomachs in New Zealand.

Researcher and ecologist Stephanie Borrelle found 50 rare prions washed up in a storm at Muriwai Beach in 2016.

An examination of their stomachs revealed all had eaten plastics.

Many ended up with stomachs so full of it that there was no room for any real food so they starved to death, she said.

Dr Borrelle said one way to reduce the amount of plastic the birds were eating could be to identify parts of the ocean where birds foraged – and there were also large amounts of plastic.

Teams could then be sent out on boats to clean up those hotspots, she said.