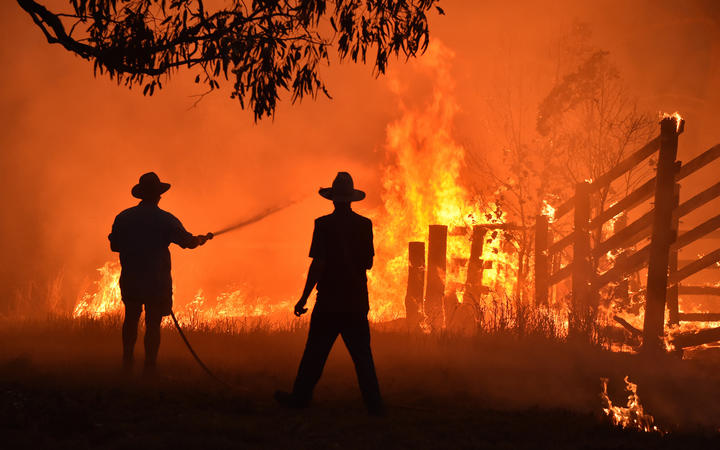 The commissioners described their task, at the very top of the report, as “looking to the future”. And they have been very clear about what that means.

“Extreme weather has already become more frequent and intense because of climate change; further global warming over the next 20 to 30 years is inevitable,” they say.

And as for what that means for fire regimes, they don’t mince their words.

The report notes there’s essentially nothing we can do about “locked in” warming, set to occur over the next two decades.

But what happens after that is up to us. Warming “beyond the next 20 to 30 years is largely dependent on the trajectory of greenhouse gas emissions”, it says.

The commissioners also highlight evidence that avoiding or mitigating risks is much more cost effective than responding to disasters after they happen – an approach they unequivocally state is not adequate.

“We need to do much more than put out fires. A resilient nation will seek to mitigate the risk of disasters through a wide range of measures, and it will attend to all of the complex and sometimes long-term consequences,” they say.

Many commentators, including former fire chiefs, cross bench politicians and conservation groups, have argued the implication from the findings is clear: that greenhouse gas emissions must be quickly reduced to net zero.

But of the report’s 80 recommendations, the commissioners do not make any aimed at trying to stop global warming.

Their only climate-related recommendation calls for climate models to be created that can provide projections for smaller geographical areas – making them more useful for local disaster preparedness.

Arguably, making recommendations about Australia’s greenhouse gas emissions or trajectory was outside the inquiry’s terms of reference.

But that hasn’t stopped others drawing their own conclusions.

“The Bushfire Royal Commission has laid out the facts in no uncertain terms: climate change drove the Black Summer bushfires, and climate change is pushing us into a future of unprecedented bushfire severity,” said Greg Mullins, former commissioner of Fire and Rescue NSW and founder of Emergency Leaders for Climate Action.

“The Federal Government absolutely must act on the root cause of worsening bushfires in Australia, and take urgent steps to reduce greenhouse gas emissions. This clearly means no new coal or gas, and a rapid transition to renewable energy.”

The Australian Minister for Emissions Reduction Angus Taylor has previously argued the only way to bring down emissions without sacrificing economic growth is through technological development.

“There are only two ways to suppress emissions. Either through some form of taxation, or you improve the activities,” he said last month.

“That’s why the Government has undertaken to develop, fund and drive a low emissions technology road map.”

That roadmap does not indicate when Australia’s emissions will reach net zero, as required under the Paris Agreement, and was labelled a “roadmap to nowhere” by the Federal Opposition.

Mullins told the ABC the royal commission was one of a long list of bushfire inquiries that made climate change central to its findings, with final reports by NSW, South Australia, Victoria and the ACT all pointed to climate change making things worse.

“I’m surprised how strong the report is. It would have been great if there were more recommendations on climate change but they’ve spelled it out chapter and verse. Together with all the other state inquiries that said exactly the same thing, there’s no dodging the issue now,” he said.

Besides the climate-related recommendation, there are 79 others that have been widely hailed as fundamentally important to preparing the country for worsening fires and other disasters we’re going to see over the coming years and decades.

But whether they will all be implemented is the important question – and one the commissioners spent some time considering.

They note this is just one of about 240 natural disaster inquiries that have been held in Australia – and “while many recommendations have been faithfully implemented and have led to significant improvements, others have not”.

They also said that in many cases, accepted recommendations weren’t always clearly implemented.

Minister for Emergency Management David Littleproud announced yesterday the Government had accepted all 80 of the report’s recommendations.

Implementing them through the federation – and in cooperation with the private sector – will be a mammoth task, but one there is no doubt the will to achieve.

Since the message about climate change throughout the report didn’t result in specific recommendations, that will require something else.