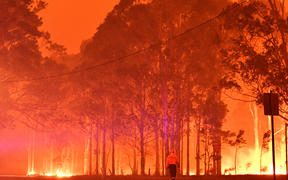 A covert firefighting operation saved an ancient grove of pine trees that were under threat due to the bushfires currently raging in Australia.

The Wollemi Pine grove near Sydney was discovered by scientists in 1994 is thought to have stood tall among dinosaurs around 200 million years ago.

It’s location is top secret, so the mission to save it was too.