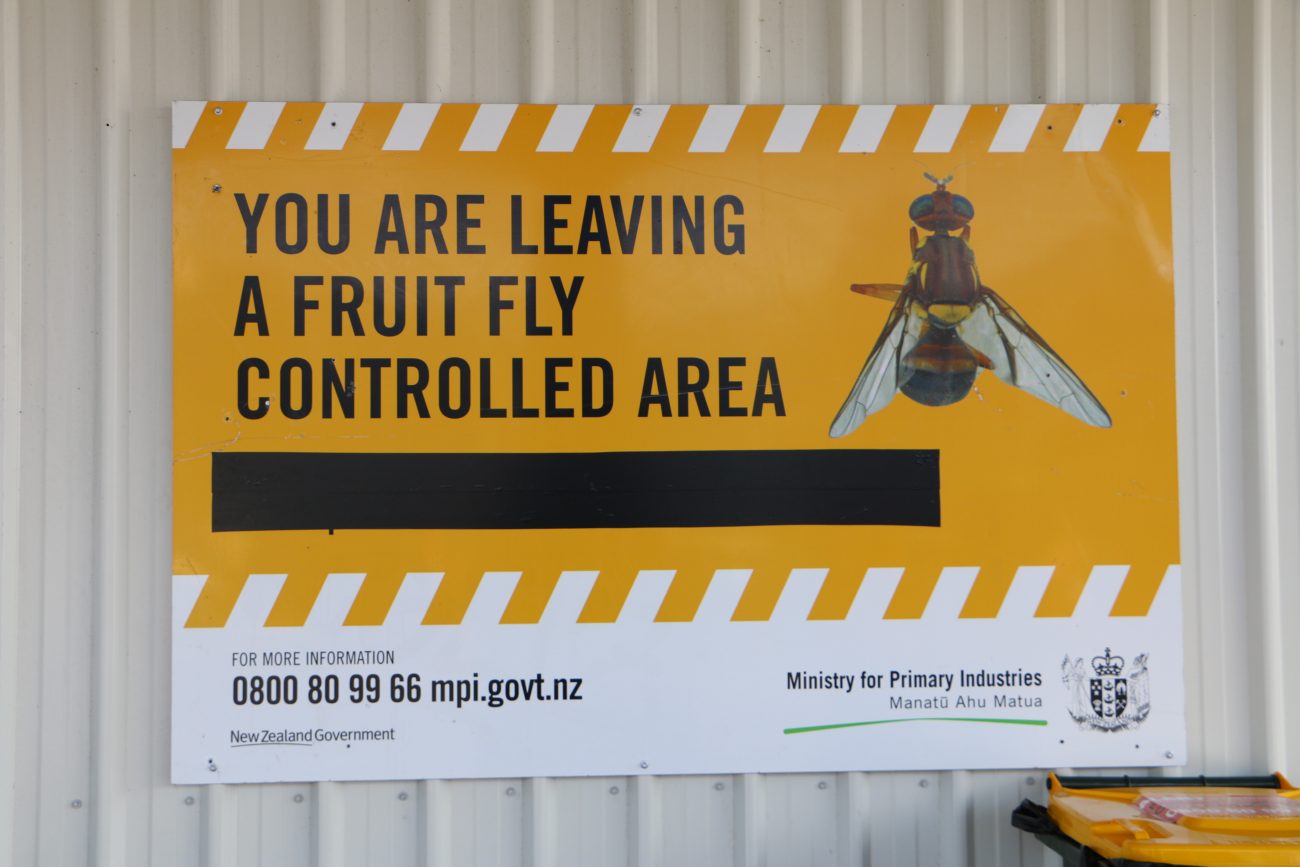 Two types of exotic fruit fly have been found in Auckland and they pose a threat to our $5.5 billion horticulture industry. Here’s your one-stop shop for all the fruit fly information know so far.

The first fly, a Queensland fruit fly, was found in a suburban garden in Devonport on Thursday, 14 February.

Another type of fruit fly, (Bactrocera facialis – the facialis fruit fly) was found in Ōtara, in the city’s south a week later and reported on 19 February.

The second fly on the North Shore of the city was found on Wednesday 20 February in Northcote, north of Devonport.

Both Queensland fruit flies were males and there hasn’t been evidence of a breeding population yet.

The finds of the two species aren’t related.

Better Border Biosecurity’s Dr David Teulon and Dr John Kean said there were several reasons the flies were most likely to be found the upper North Island.

The region was the main point of entry for travellers and traded goods and the climate was favourable for them.

What risks do the flies pose?

Put simply, the Queensland fruit fly spoils many horticultural crops, often making them inedible, according to the Ministry for Primary Industries (MPI).

Eighty percent of our horticultural crops are susceptible to attack from the Queensland fly.

MPI said the fly would “jeopardise a horticulture industry worth $5 billion a year in domestic sales and exports”.

If an attack occurred, any fruit and vegetables would be subject to trade restrictions.

The facialis fly is native to Tonga where it badly affects crops of capsicum and chilli but appears to be less harmful to other fruit and vegetables.

However, it’s a tropical species so New Zealand’s climate may not provide an ideal home for it.

Regardless, MPI has placed the same warning of risk to the horticulture industry on the facialis fly as the Queensland fruit fly.

Of the last six fruit fly incursions, only one has involved a small breeding population.

“New Zealand and Chile are the only major horticultural producing countries in the world that are free from fruit fly species that attack commercial fruit.

“Therefore, no matter which type of fruit the fly was shown to be established on, New Zealand would lose its pest-free status,” Dr Armstrong said.

“In the immediate term, our biggest fresh fruit exports of kiwifruit and apples, and others such as cherries, avocados and capsicum, could be locked out of trade for a period with their largest markets in Asia, the Americas and Europe until eradication was proven.

“These regions do not have this fruit fly species which would put their own fruit industries at risk.”

The worst-case scenario would be if eradication was not possible, she said.

“Our standing on the global fresh fruit market would be severely undermined, and our competitive advantage and premium returns eroded through pre-export treatments and loss of fruit quality … Fruit for processing would also be impacted by production loss and pest management measures.”

Home gardeners would be hit by the inconvenience and cost of monitoring with traps and increased use of pesticides, bringing additional environmental and health impacts.

How did they get here?

Biosecurity New Zealand’s Catherine Duthie said it was likely the Devonport fly arrived in imported fruit or vegetables, though it may never be known exactly how it came into the country.

As for the Ōtara fly, she said it would have arrived in egg or larvae form on a fruit or vegetable but how that fruit arrived here might not be determined.

“Like most biosecurity responses, we can almost never tell the exact pathway of entry, which is why we have this surveillance system.”

Dr Duthie said it was the first time the facialis fly had been found in a surveillance trap, although it had previously been found in inspections at the border.

Dr Teuon and Dr Kean said the principal means by which fruit flies travelled long distances is as eggs or larvae inside fruit.

What are the authorities doing?

More than 80 Biosecurity New Zealand staff working across all responses to the fruit flies with field crews working closely with the impacted communities.

Biosecurity New Zealand is having leaflets translated into a number of languages including Samoan, Tongan, Chinese, Cook Island Maori, Fijian and Hindi.

Our teams are out delivering leaflets and information about the Queensland Fruit Fly around Northcote. You can find an FAQ here https://t.co/BoZ4Gb5vcZ pic.twitter.com/N1NLm18vlL

More fly traps have been set up in the affected areas and Biosecurity field staff have been checking all properties within 200m of where the single fly in Devonport was found, with surveillance activity for auckland stepped up.

Controlled areas have been set up for the North Shore suburbs and Ōtara.

The North Shore suburbs are Zone A North, and Ōtara is Zone B South.

In all zones movements of fruit and vegetables have been restricted.

Signs have been put on key arterial roads in and out of Otara and in Devonport, and will now be placed in Northcote.

In Zone A North, No whole fruit or vegetables (except leafy and root vegetables) can be taken out of the affected areas.

In addition, no fruit or vegetable waste can leave. Fruit and vegetables should either be disposed of in a home in-sink disposal unit or put into specially supplied Biosecurity New Zealand bins.

In Zone B, you cannot move homegrown fruit and vegetables out of the controlled area.

However, commercially-purchased fruit and vegetables can be taken out.

Homegrown produce waste and garden waste needs to be disposed of in Biosecurity New Zealand bins.

Minister for Biosecurity Damien O’Connor has said getting rid of the fruit fly was New Zealand’s “most well-oiled biosecurity response”.

“We’ve been here several times before and each time we’ve successfully got rid of this horticultural pest,” he said.

“Two fruit flies is not an incursion as we saw in 2014 when the fruit fly was found twice in Whangarei, but we can’t be too careful and as the response ramps up I urge the local community to be vigilant.”

He also wanted authorities to check the hundred of traps on Auckland’s North Shore by the weekend, rather than checking them once a fortnight.

Additionally, he wanted all 2000 traps across the rest of Auckland checked as soon as possible.

The response and eradication of the Queensland fruit fly and the facialis fly is estimated to take two-to-three weeks, both operations costing $1.3 million.

MPI has ordered an independent review of its own biosecurity systems following the discovery of the flies.

Ministry for Primary Industries director general Ray Smith told Morning Report he would be bringing in an independent expert, likely from Australia, to do a short review of New Zealand’s border biosecurity to see if there was any holes in the system.

“I think it’s prudent to have quick look and say … ‘are there any gaps, and if there are any let’s find out and let’s just go and fix them’.”

The review would take about a month and will get underway next week.

The fruit fly response at a glance: