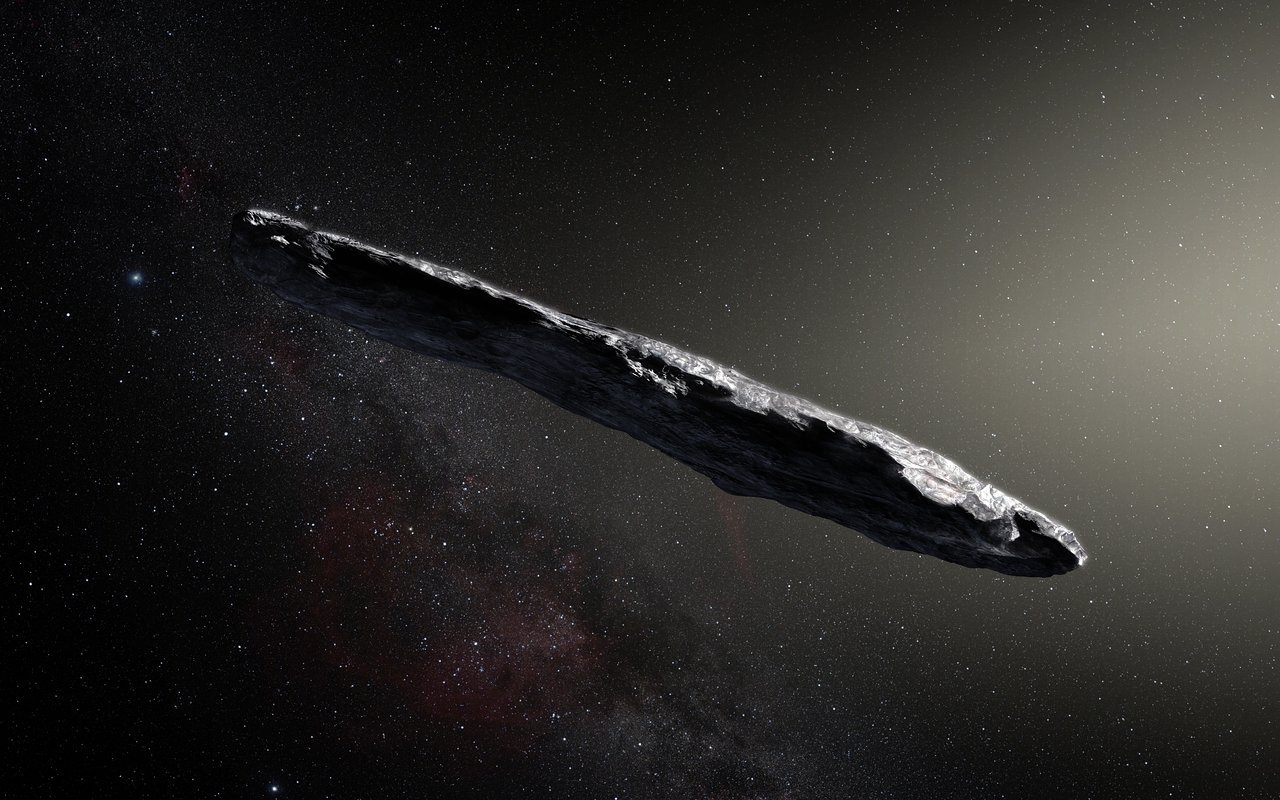 An asteroid that visited us from interstellar space is one of the most elongated cosmic objects known to science, a study has shown.

Discovered on 19 October, the object’s speed and trajectory strongly suggested it originated in a planetary system around another star.

Astronomers have been scrambling to observe the unique space rock, known as ‘Oumuamua, before it fades from view.

Their results so far suggest it is at least 10 times longer than it is wide.

That ratio is more extreme than that of any asteroid or comet ever observed in our Solar System.

Using observations from the Very Large Telescope in Chile, Karen Meech, from the Institute for Astronomy in Honolulu, Hawaii, and colleagues determined that the object was about 400m long, rapidly rotating and subject to dramatic changes in brightness.

These changes in brightness were the clue to ‘Oumuamua’s bizarre shape.

“Looking at the asteroid light curve database, there are five objects (out of 20,000) that have light curves that would suggest a shape up to an axis ratio of about 7-8 to 1,” Dr Meech told the BBC.

“Our errors are very small, so we are confident this is really elongated. Also, one has to realise we don’t know where the rotation pole is pointed. We assumed that it was perpendicular to the line of site. If it were tipped over at all, then there are projection effects and the 10:1 is a minimum. It could be more elongated!”

But in other respects, ‘Oumuamua (pronounced oh MOO-uh MOO-uh), appears to resemble objects we know from closer to home.

“We also found that it had a reddish colour, similar to objects in the outer Solar System, and confirmed that it is completely inert, without the faintest hint of dust around it,” Dr Meech said.

These properties suggest that ‘Oumuamua is dense, comprised of rock and possibly metals, has no water or ice, and that its surface was reddened due to the effects of irradiation from cosmic rays over long periods of time.

Although ‘Oumuamua formed around another star, scientists think it could have been wandering through the Milky Way, unattached to any star system, for hundreds of millions of years before its chance encounter with our Solar System.

“For decades we’ve theorised that such interstellar objects are out there, and now – for the first time – we have direct evidence they exist,” said Thomas Zurbuchen, associate administrator for Nasa’s science mission directorate in Washington DC.

“This history-making discovery is opening a new window to study formation of solar systems beyond our own.”

If planets form around other stars the same way they did in the Solar System, many objects the size of ‘Oumuamua should get slung out into space. The interstellar visitor may provide the first evidence of that process.

As regards how ‘Oumuamua became so elongated, Dr Meech explained: “There has been speculation among various team members about this. Sometimes very elongated objects are contact binaries… but even so, the pieces would be longer than most things in the Solar System, and our analysis shows that it is rotating fast enough that they should not stay together.

“One of our team wondered if, during a planetary system formation, if there was a large collision between bodies that had molten cores, some material could get ejected out and then freeze in an elongated shape.

“Another team member was wondering if there could be some process during the ejection – say if there was a nearby supernova explosion that could be responsible.”

The cosmic interloper was discovered by Rob Weryk, a postdoctoral researcher at the Institute for Astronomy and a co-author of the new study, which is published in Nature journal.

Weryk and fellow Institute for Astronomy researcher Marco Micheli realised it was going extremely fast (with enough speed to avoid being captured by the Sun’s gravitational pull) and was on a very eccentric trajectory taking it out of our Solar System.

The asteroid’s name, ‘Oumuamua, means “a messenger from afar arriving first” in Hawaiian.