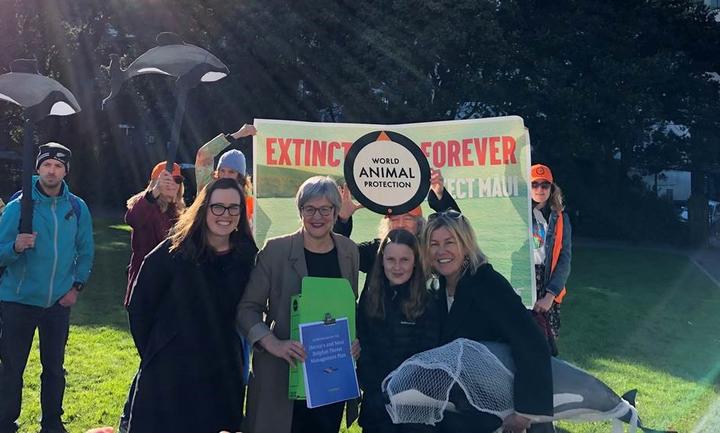 It is believed there are only around 60 Māui dolphins, and Hector’s Dolphins are currently on the critically endangered list.

About 30 people attended the march, carrying cut-out photos of dolphins, and chanting “extinction is forever”.

In attendance was Outrageous Fortunes actor Robyn Malcolm, along with her niece.

“But also, they [Māui and Hector’s dolphins] are ours. We look after our own backyard don’t we. I feel like it’s a national responsibility.”

The petition was presented to the Minister for Conservation, Eugenie Sage.

The petition was designed to put pressure on the Government during the public consultation on the review of the Hector’s and Māui dolphin Threat Management Plan.

The plan was first created in 2007, which led to the establishment of four marine mammal sanctuaries, to protect the endemic species. It underwent a review in 2012, and is now in the process of being reviewed again.

But under the current proposals in the latest review, Greenpeace and World Animal Protection believe it will not be enough. In the petition, they have demanded an extension to the marine mammal sanctuaries, as well as a ban on stop net and trawl fishing.

This proposal would greatly restrict inshore fishing, especially on the West Coast of the North Island.

A second restriction would protect the more numerous Hector’s dolphin off the east coast of the South Island.

Liz Slooten, a zoology professor at Otago University, believed the current proposals in the latest review would not be enough.

“For Maui dolphins, the fact that we didn’t do this 10 years ago is a serious risk factor,” she said. “This is the fifth time we’re doing this, and we’ve got to get it right the fifth time.”

Other proposals in the petition are to stop seabed mining and oil drilling, as well as stopping seismic testing.

Greenpeace Oceans campaigner, Jessica Desmond, said that the petition was presented with a mandate.

“We’ve presented the voices of nearly 60,000 New Zealanders today, and that is a mandate for this Government to act boldly, and we really hope that they have heard that.”

Conservation Minister Sage accepted the petition, and said that they would consider the submissions and further recommendations.

In response to the government’s plan, Seafood New Zealand chief executive Tim Pankhurst said that it was part of an anti-fishing agenda.

“This plan will have an enormous impact on literally hundreds of small fishers,” he said.

“These are not big corporates. These are small companies and fishing families around New Zealand that provide relatively cheap fish and chips that we all enjoy.”

Jobs on the line

Seafood New Zealand said the livelihood of hundreds of people in the fishing industry was being threatened in an attempt to preserve the Māui dolphin.

That was despite there being no guarantee that a single animal might be saved, the organisation said.

The accusation came in a submission on the recently-proposed Threat Management Plan.

In his submission, Seafood New Zealand’s Tim Pankhurst said the proposed changes would do little to save the dolphin but a lot to harm the fishing industry.

He said the government’s own plan conceded that set netting might capture an estimated one Māui dolphin every 10 years and with the trawl fishery, one in 50 years.

The real victims would be people dependent on the fishing industry for their livelihood, he said.

“This plan will have an enormous impact on hundreds of small fishers.

“These are not big corporates, they are small companies and fishing families that provide relatively cheap fish for the fish and chips that we all enjoy.”

The government was using a sledge hammer to crack a nut, Mr Pankhurst said.

“There has been very poor consultation, and absolutely no analysis of the socio-economic impact,” he said.

“There has been no talk of transitioning fishers to other forms of fishing, and no look at the property rights of the people involved in the industry.”

The Māori fishing body Te Ohu Kaimoana added its voice to criticism of the plans.

Te Ohu Kaimoana, which was once called the Treaty of Waitangi Fisheries Commission, has said in its submission on the revised plan proposed that the options did not provide meaningful conservation benefits for the dolphins.

But it said they would have a devastating effect on inshore fishing communities and those who depended on them.

An additional problem was that the proposals could undermine the Treaty of Waitangi.

“An inevitable consequence of the proposals will be to undermine the ability of Iwi Māori in affected areas to enjoy the benefits of their traditional relationship with various fish species,” Te Ohu Kaimoana wrote.

“These rights are guaranteed by the Treaty of Waitangi. Undermining this relationship will have consequent effects on Māori customary practices and commercial impacts, both of which support Māori identity.

“This type of process also detracts from partner relationships that Te Ohu Kaimoana and Iwi expect, according to Te Tiriti o Waitangi.”

The organisation added that commercial fishing was not the main problem for dolphins.

“The primary threat with the biggest impact on dolphin populations is the viral cat disease toxoplasmosis,” Te Ohu Kaimoana wrote.

It said there had been no direct action to deal with this problem, even though it had been recognised as long ago as 2008.

“After more than a decade of inaction …. the focus of mitigation should not be placed on fishing …. we support a more holistic approach that involves active

steps to address degraded habitat and restore health to Tangaroa.”

Seafood NZ’s Mr Pankhurst also said the Government itself had acknowledged the main threat came from the cat-borne disease toxoplasmosis, but there was no plan to deal with it.

However, environmentalists have heavily criticised the report that suggested toxoplasmosis was the main threat.

Dolphin expert Dr Slooten said she was surprised the theory had even seen the light of day.

The number of dolphins dying from toxoplasmosis had been “wildly exaggerated”, Dr Slooten said.

The figure of 300 dolphin deaths a year from toxoplasmosis had been based on a sample of just 28 dolphins, she said.

“So far, the only species anyone in the world is worried about in terms of toxo is seals and sea lions, the very endangered monk seal for example.

“There’s no suggestion anywhere else in the world that this is a problem anywhere like the magnitude that’s being suggested.

“If there really were 300 dolphins being killed each year by toxo, then not only Māui but Hector’s dolphins would be free falling towards extinction,” Dr Slooten said.

A revised version of the plan is up for discussion and submissions close today.