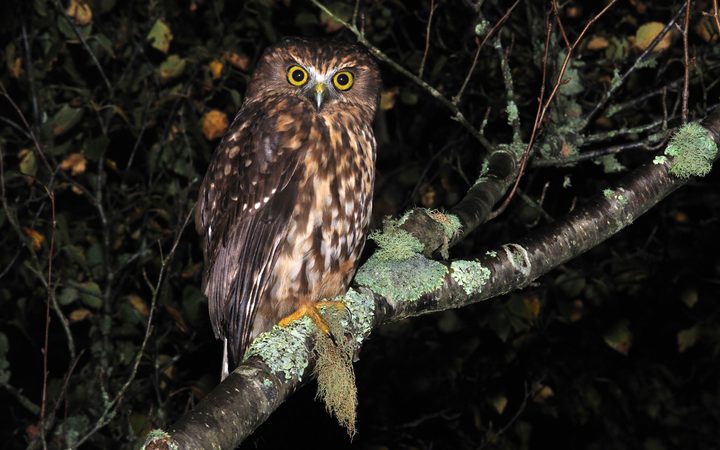 Sick ruru and moreporks are being admitted, with no official cause, but there’s speculation that it may be secondary poisoning from eating rats or mice that have ingested rodenticide.

New Zealand Bird Rescue general manager and toxicologist Lynn Miller says the birds have to undergo a horrible fate if they’ve gotten to an acute stage of the poisoning.

“Being poisoned with rodenticide that causes you to bleed out is not a particularly happy ending … And it’s not just a problem here. It’s also a problem in other countries.”

At the moment, they have 12 birds in care. But it’s not always obvious what they’re suffering from when they’re admitted in.

“They’re just found grounded, or they’ve been clipped by a car or run into something. And some of the work that we have done in the past in North America has indicated that these [birds] are coming in with these seemingly odd, not too much damage done, impacts do have an underlying issue with clotting factors. They are not clotting.

“And so the primary cause of that, of course, are the rodenticides that they’re ingesting from the rats and mice that they’re feeding on.”

She says often preying birds will target something that’s not going to fight back quite easily, and these poisoned rats looked like a “cheap and easy meal”.

“These animals that are starting to go through the end stages of bleeding out, they’re not terribly concerned about being hidden, so they’re much more in the open, and of course become a very readily accessible meal.”

Before the rise of rats and mice, rurus would have eaten insects mostly and in fact 80 percent of their diet is invertebrate, Dr Miller says.

One consideration for people to take into account is using snap traps if it’s viable, she says.

“We do have to be realistic that there are many areas that become great breeding grounds for many of these species.

“All I ask is if you can humanely snap trap in an area, let’s do it that way, because it’s quick, it’s clean and we don’t have the secondary toxicity issues to deal with.”

One primary source of such poison was brodifacoum, which also creates problems for cats and dogs and studies show can lurk in the liver for up to a year, Dr Miller says.

“The biggest problem is that you often don’t know until it’s quite advanced. And the anticoagulant rodenticides work by stopping the clotting factors being effective, and there’s many areas that have to break down before you actually see they start to have uncontrolled bleeding.

“But again, there’s also a difference between whether you have a chronic low dose situation or an acute dose … With the cats and dogs, often, people don’t realise that [their pets] have actually ingested this until quite far along, and all the clotting cascade points that sort of act as a backup system had been worn out, basically, or being used.

Miller says the growth of the ruru species is a testament to the works of pest management, but she’d also like to see how it can be improved to continue to reduce the populations of the animals that are undesirable while supporting native species.